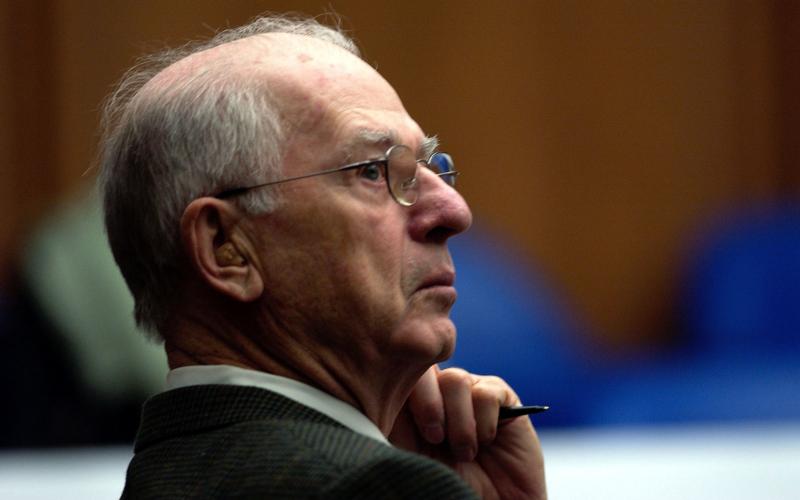 Former priest Paul R. Shanley listens to a procedural discussion during his 2005 trial in Cambridge, Mass. Shanley, a major figure in the U.S. church’s child sex abuse scandal, was released from prison July 28 after serving 12 years for raping and assaulting a boy in the 1980s. (CNS photo/Jodi Hilton, Reuters)

BRIDGEWATER, Mass. (CNS) — Former priest Paul R. Shanley, a major figure in the U.S. church’s child sex abuse scandal, was released from prison July 28 after serving 12 years for raping and assaulting a boy in the 1980s.

Shanley, now 86, was sentenced to 12 to 15 years in prison in 2005 after a jury found him guilty on two counts of raping a child and two counts of indecent assault and battery on a child. He was released from the Old Colony Correctional Center in Bridgewater for good behavior. He will have 10 years of supervised probation.

Ordained as a priest of the Boston Archdiocese, Shanley was laicized in 2004.

“Paul Shanley’s crimes against children were reprehensible. No young person should ever have to experience such violations of their safety and dignity,” the Boston Archdiocese said in a brief statement posted on its website July 25 in anticipation of Shanley’s release.

“We continue to assure all victims of abuse of our prayers and our concern,” it said. “Any person who has been harmed by clergy sexual abuse, and in particular those who may need additional support at this time, are encouraged to contact the Archdiocese’s Office of Pastoral Support and Outreach at (617) 746-5995.”

Shanley was the second former Boston priest to be criminally convicted of child sex abuse since the clergy sex abuse crisis came to light in 2002. The other, John J. Geoghan, was serving a 10-year sentence for fondling a child when he was killed in 2003 by another inmate.

Prosecutor Lynn Rooney wanted life imprisonment for Shanley. His accuser, who asked the media not to use his name, issued a written statement read by Rooney at the ex-priest’s sentencing. “I want him to die in prison. I hope it is slow and painful,” said the accuser.

Shanley was known in the 1970s for his street ministry to gay and troubled youths. That ministry ended in 1979, and he was assigned to work in various parishes.

His accuser testified that he had been repeatedly raped and molested in the 1980s by Shanley but had repressed his memories of the events until the clergy sex abuse scandal that came to light in 2002 revived them.

In 2005, in Middlesex Superior Court in Cambridge, when he announced Shanley’s sentence that February, Judge Stephen Neel said: “It is difficult to imagine a more egregious misuse of trust and authority.”

NEXT: Health care laws must begin and end with human person, bishop says