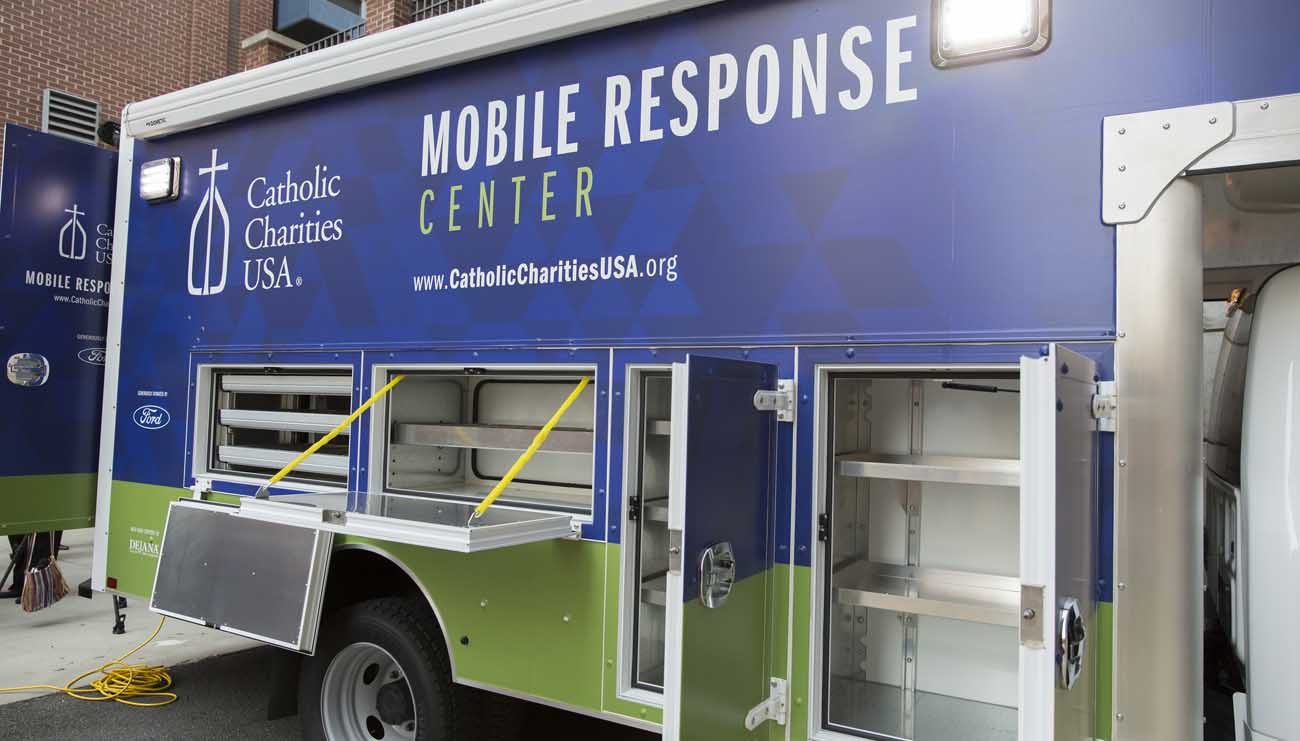 A new Mobile Response Center is seen during an Aug. 22 event in Alexandria, Va., during which Ford Motor Company presented Catholic Charities USA with the center. When not responding to a disaster across the country, the mobile center will be available to the Washington and Baltimore archdioceses and the Diocese of Arlington, Va., to serve those in need in the local region. (CNS photo/Jaclyn Lippelmann, Catholic Standard)

ALEXANDRIA, Va. (CNS) — Ford Motor Co. has given Catholic Charities USA a new Mobile Response Center, which will bring relief and recovery to people across the country experiencing disasters.

The van was presented Aug. 22 to the national agency, which is a network of Catholic Charities agencies and programs in U.S. dioceses and has its headquarters in Alexandria.

The vehicle is wheelchair accessible, has air conditioning, lighting, wheelchair access and even a phone-charging station, which will be particularly helpful for people in a disaster who need to reconnect with their families.

Msgr. John Enzler, president and CEO of Catholic Charities of the Archdiocese of Washington, said the new Mobile Response Center will allow the agencies to get services to a lot of people who normally wouldn’t have access to them, and also mentioned how Pope Francis has asked the Catholic Church to go out into the periphery, go out into the streets and make a difference.

“We think this is our chance to do just that,” he added.

Art Bennett, president and CEO of Catholic Charities of the Diocese of Arlington, echoed the sentiment that the Mobile Response Center would help them follow the call of Pope Francis, calling it a “great symbol” of the church as a field hospital for the poor.

Bill McCarthy, executive director of Catholic Charities of Baltimore, said the van would allow the charities to “meet people where they are.”

“We feel enriched by this opportunity to engage people who may not otherwise be engaged,” he added.

Each diocese will have the van for one week per month, if it is not needed for a disaster. At first, Catholic Charities of the Archdiocese of Washington plans to bring the van to some of their current programs, said Msgr. Enzler, but eventually they hope to use it to bring services to people living on the streets or in tent cities.

When they do so, they plan to have a case worker available to talk to the homeless, in addition to bringing them supplies to help meet their basic needs, such as blankets and gloves in the winter or water and a place to cool off in the summer. They will also bring them toiletries, and the van will later have a trailer attachment with showers and a place to do laundry.

Ashenafi Anota, who will be driving the Mobile Response Center, said he is excited to be a part of this “very big idea to help homeless people.”

Anota, who moved to the United States from Ethiopia 10 years ago, used to be a taxi driver. He met Dominican Sister Donna Markham, president and CEO of Catholic Charities USA, when he was driving her to the airport. They got to know each other, and she was his customer for about two years before she referred him, and later his wife, to work in the office at Catholic Charities.

“She wanted to support the family,” Anota explained about Sister Markham’s hiring him and his wife. “She knows how hard it is to raise three kids as a taxi driver.”

Now, Anota will have the opportunity to use his driving skills while continuing to work for Catholic Charities and helping those in need.

“All the time, to help someone in a bad condition is very good,” he told the Catholic Standard, Washington’s archdiocesan newspaper.

NEXT: Pittsburgh mayor brings together faith leaders to pray for end to racism