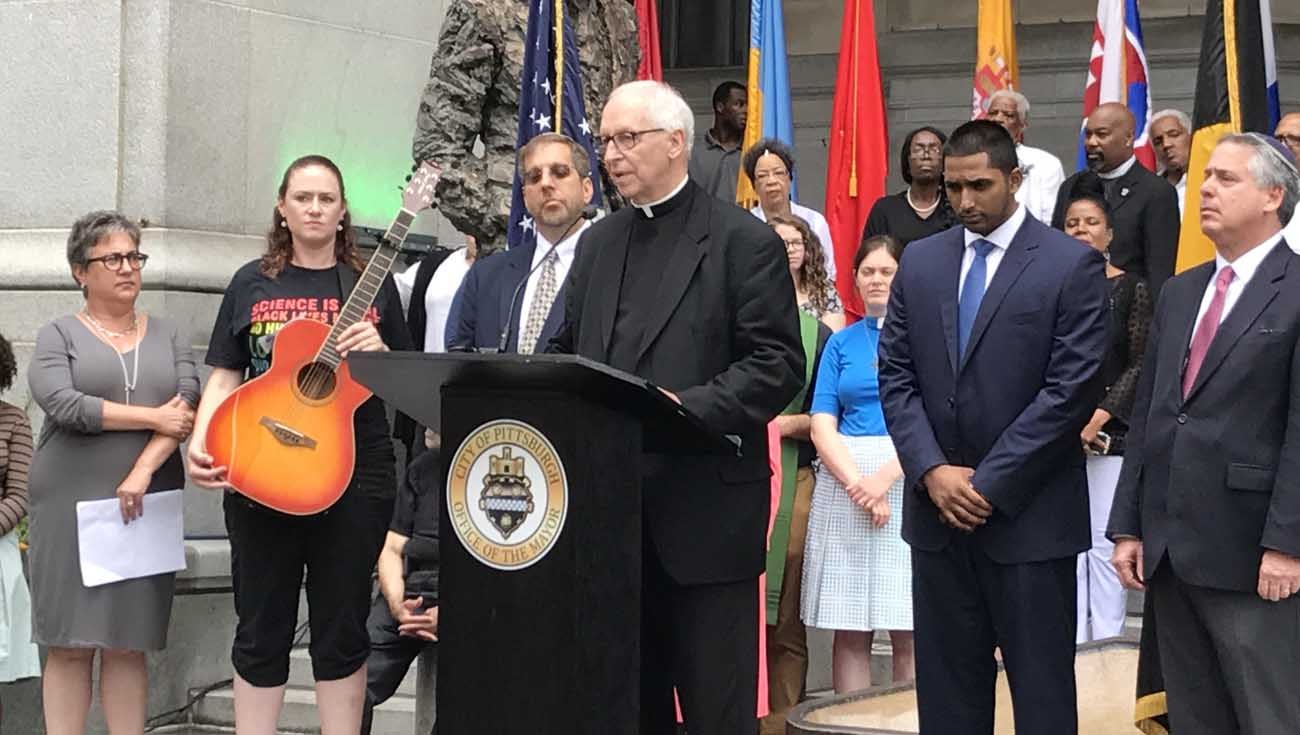 In front of a statue of former Mayor Richard Caliguiri, Msgr. Ronald Lengwin, spokesman for the Pittsburgh Diocese, speaks Aug. 18 at the interfaith rally, "A Prayer for Pittsburgh: A Prayer for Peace," rally in downtown Pittsburgh. (CNS photo/William Cone, Pittsburgh Catholic)

Msgr. Ronald Lengwin read remarks from Bishop David A. Zubik, who was unable to attend the Aug. 18 event as he continues to recover from back surgery.

The priest mentioned “slavery, Jim Crow laws, Nazism, anti-Semitism and Islamophobia,” and touched on the parable of the good Samaritan as a “lesson about ethnic, religious and cultural reconciliation, showing we can care for each other even when we don’t agree with each other.”

Pittsburgh Mayor Bill Peduto had called for the assembly of faith leaders in response to violent and hate-filled events in Charlottesville, Virginia, and elsewhere.

With snow-plow trucks blocking the street, “A Prayer for Pittsburgh: A Prayer for Peace” rally took place outside the City-County Building.

Uniting with our neighbors to celebrate their cultural traditions makes everyone feel welcome, Msgr Lengwin said, recalling children’s TV pioneer Fred Rogers, who asked, “Won’t you be my neighbor?” at the start of his show.

“For instance, some of us — even though our ancestors weren’t German — might enjoy participating in Oktoberfest, when German culture is celebrated with brass bands, beer and apple strudel,” the priest said. “The fact that many Americans feel the same way after two wars with Germany is a sign of healing. This kind of reconciliation shows America at her best.

“However, if someone proposed celebrating German heritage with Nazi flags and a re-enactment of the Nuremberg rallies, virtually everyone would be horrified.”

“Racism wounds all of us,” Msgr. Lengwin continued. “Let’s come together as neighbors. Let’s counter hatred with love. Let’s show how much good we can do when we are united in our response to evil.”

The lunchtime crowd cheered when, at the start of the rally, legendary Steelers running back Franco Harris led the assembly in the Pledge of Allegiance. He spoke of the challenges that the American people have faced and conquered through the centuries.

“We think we have problems. People still want to come here. They still come here from all over the world. And every new wave brings new hope,” he said.

Other speakers included Sister Janice Vanderneck, a Sister of St. Joseph, who is director of Casa San Jose, a community resource center for Latino immigrants; Pentecostal Bishop Loran Mann, who served as master of ceremonies; Rabbi Sharyn Henry and cantorial soloist Molly May from Rodef Shalom Congregation; the Rev. Deryck Tines and the Lemington Gospel Choir; and others.

Wasi Mohamed, executive director of the Islamic Center of Pittsburgh, urged people to build bridges of peace and understanding to counter the hate and disunity that they see around them.

“Inaction is no longer acceptable,” he said. “For the situation to change in this country and around the world everybody kind of has to take it upon themselves to change themselves to improve society.

“What we really need to focus on is building our community together.”

NEXT: Air Force pilot shot down over Cambodia and MIA for 46 years laid to rest