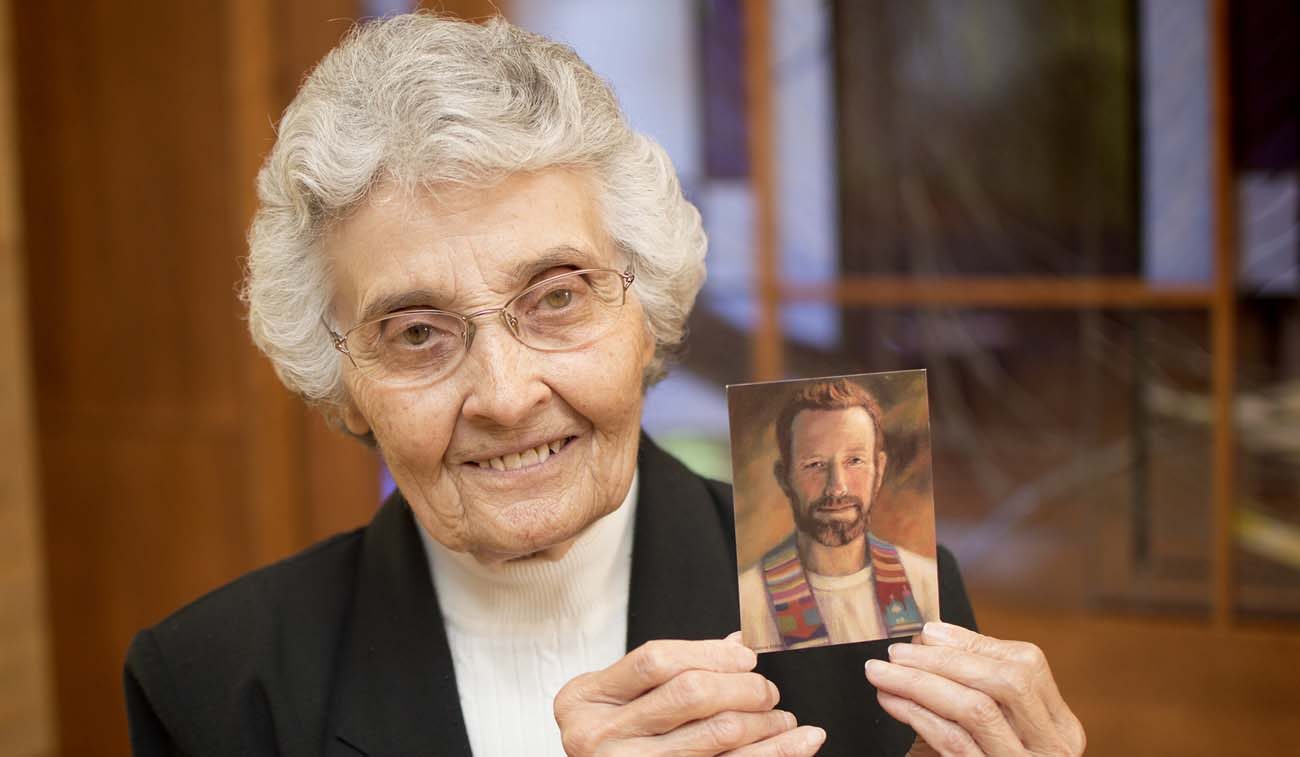 Sister Marita Rother, a member of the Adorers of the Blood of Christ, holds a picture of her brother, Father Stanley Rother, a priest of the Oklahoma City Archdiocese, who will be beatified Sept. 23 in Oklahoma City. (CNS photo/Christopher Riggs, Catholic Advance)

WICHITA, Kan. (CNS) — Sister Marita Rother really didn’t get to know her brother, Father Stanley Rother, as a priest until she visited him in Guatemala in the 1970s.

She was at the Adorers of the Blood of Christ convent in Wichita when he left to study for the priesthood.

“He went to the seminary right after high school,” she said, adding that he didn’t tell his parents of his interest in the priesthood until after he graduated.

“We never talked about it,” Sister Marita told the Catholic Advance, newspaper of the Wichita Diocese. “We were both rather quiet. I didn’t even tell my friends until shortly before I left that I was actually leaving (to become a nun).”

Still, she and her three brothers were close to one another and to their parents, she recalled.

“We were very seldom not doing things together. Our parents really did keep us in line. We had great respect for each other … anytime they would hear squabbling — if it was in their earshot — they would calm us down.”

But Stanley was different from his siblings, she said.

“I actually do not remember him getting a scolding from my parents,” Sister Marita said. “I got my share, my other brothers got theirs. Not that I was comparing myself, but when I thought back on it, I don’t remember, particularly my mother, ever correcting him for anything, or scolding him like we used to get.”

His behavior may have been a foreshadowing of why he will soon be honored by the church.

Sister Marita will be among those participating in a beatification ceremony for Father Rother Sept. 23, in Oklahoma City. Pope Francis acknowledged Father Rother’s martyrdom in December, making the Okarche, Oklahoma, native the first recognized martyr to have been born in the United States.

Hundreds of thousands of Catholics died in the Guatemalan civil war from 1960 to 1996, targeted because of the church’s insistence on catechizing.

In time, Father Rother’s name appeared on a death list. He and an associate left Guatemala in 1981 because of the danger. Father Rother returned to Oklahoma, but his heart was still with the people.

He had a great empathy for the poor, Sister Marita said. Though many of his flock spoke Spanish, a year or two after he began his missionary work in Santiago Atitlan, he asked to begin training in the Tzutujil language, one of the 21 Mayan languages spoken in Guatemala, so that he could better serve his flock.

“It’s a very difficult language to learn and almost everyone who heard him speak it could not believe that he learned it in the short time that he did. This man who flunked a year in the seminary because he couldn’t learn Latin is now speaking Tzutujil,” she said.

It was a blessing for many of his estimated 15,000 parishioners.

“They could understand what he was talking about,” Sister Marita said. “It got to where he was giving his homilies in Tzutujil. He soon became known as Padre A’Plas, his Indian name, which was Tzutujil for Francis.”

Because of his ability to communicate in the Mayan dialect, she said, the people claimed Father Rother as one of their own.

“When he left, it was like leaving his people,” she said. “There was no one there to continue the Mass in their language. He did not want to leave. When he got home, he longed to be back with them. He knew they were not going to survive spiritually and I think he felt like he abandoned them.”

He returned to Oklahoma for about three months.

“When I saw him … he looked terrible. It was like he was lost. He kept gazing out the window, kind of in his own thoughts, and we knew what they were.”

When he was told it was safe to return to Guatemala, he hesitated because of his mother’s illness, but he decided to return.

Within three months of his return, on July 28, 1981, three men entered his rectory in the dead of night and murdered him.

“We knew he was in danger. We didn’t know that things had escalated to that point,” Sister Marita said. “To get that call was very painful.”

She added that she began to understand the love the people had for her brother on her second trip to Guatemala in 1978. She met children here and there all named Francisco. “It turns out there were lots of Franciscos there,” she said. “It became a very common name.”

Although Father Rother’s body is buried in Resurrection Memorial Cemetery in Oklahoma City, his heart will always be with the people he loved. It is enshrined at St. James the Apostle Church in Santiago Atitlan.

Riggs is editor of the Catholic Advance, newspaper of the Diocese of Wichita.