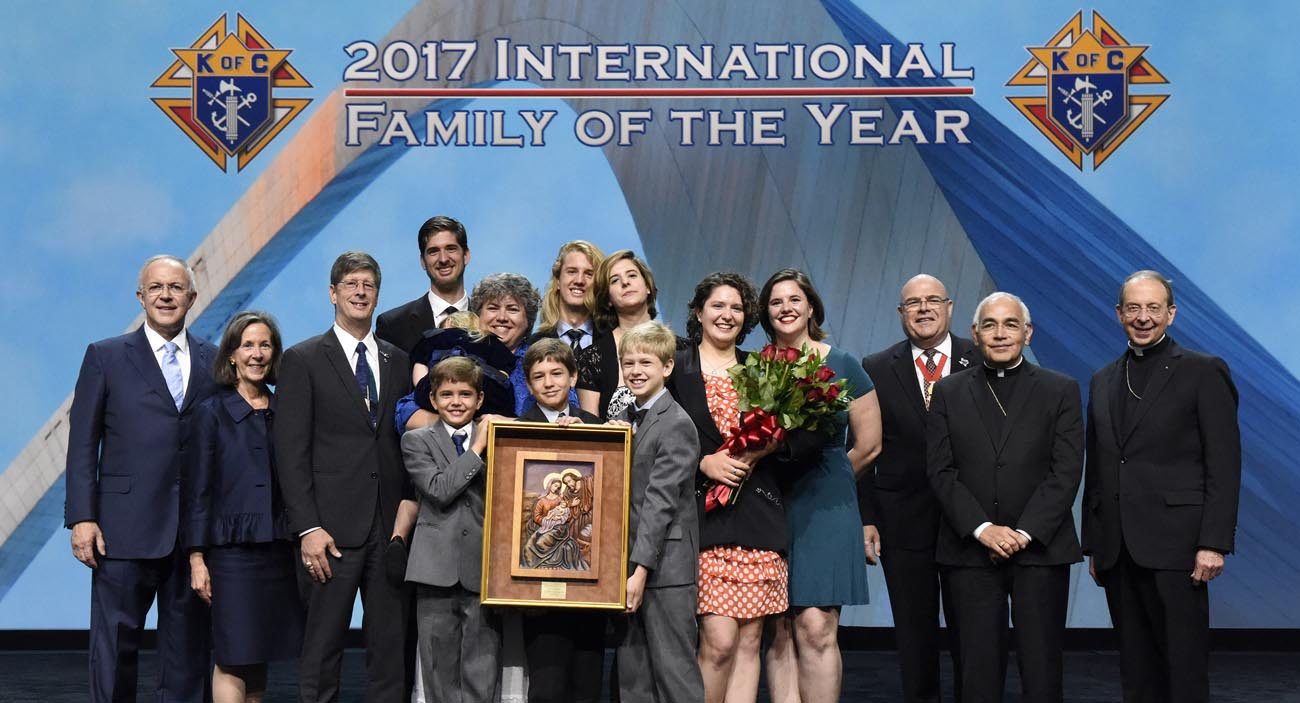 Supreme Knight Carl Anderson, CEO of the Knights of Columbus, Texas State Deputy Douglas Oldmixon, third from right, Bishop Joe S. Vasquez of Austin, Texas, and Baltimore Archbishop William E. Lori, far right, pose Aug. 2 with Larry and Beth Odom and their 10 children during the Knights' annual international convention in St. Louis. The Knights named the family from Austin as International Family of the Year for 2017 for the special care they have shown for the homeless. (CNS photo/Knights of Columbus)

ST. LOUIS (CNS) — A family from Austin, Texas, that has shown special care for the homeless was named the Knights of Columbus International Family of the Year for 2017 during the Knights’ annual international convention Aug. 1-3 in St. Louis.

Larry and Beth Odom and their 10 children typically carry supplies with them when they go out to give to those in need they encounter. When fire destroyed the home of a single mom and her four children, the Odoms took them into their home for five months.

“Larry and Beth have taught their children to serve selflessly,” said the application nominating the Odoms for the award. “Serving others is, for them, a privilege, not a burden.”

“It’s a lesson I learned from my parents,” Larry said in an Aug. 3 statement. “I remember on more than one occasion, people stayed with us when I was a boy.”

Larry belongs to the Knights of Columbus Council 8156 in Austin, which he joined after attending a council event with his family.

“We were treated like family,” said Larry. “The family atmosphere was contagious and we really enjoyed it.”

Larry, Beth and their children volunteer with the council by setting up, cooking, serving food and cleaning up for the council’s community dinners and fundraising events.

Larry, an engineer for Silicon Laboratories, has been a Knight for 10 years. He has held the office of grand knight and has served as a delegate to both state and international Knights’ conventions.

Beth teaches for a homeschool co-op and serves on the bishop’s Committee for Homeschooling in the Diocese of Austin. For nine years she also prepared and served meals for Generations of Faith, a monthly program that brings 250 to 400 people together to learn about their faith in a family-based fellowship program.

The Odoms are parishioners at St. Catherine of Siena Church in Austin where six members of the family have served as extraordinary ministers of holy Communion and nine of the 10 children have been altar servers.

“My husband and I are involved and my children want to be involved when they are old enough. They enjoy it because they know what’s happening,” Beth said.

The couple’s oldest son, Alex, has been a Knight for six years and is now a seminarian for the Diocese of Austin. Their daughter, Crystal, is discerning a vocation with the Sisters of St. John in the Philippines. The Odoms have also been involved in youth catechesis, retreat ministry, 40 Days for Life, the Toastmasters Club, Boy Scouts and parish choirs.

Larry described the award as humbling and a tremendous honor.

“We’re happy for the recognition and excited and happy to be able to serve,” he said.

Other awards given during the convention to Knights of Columbus councils included recognition for community service, fundraisers, and family and church activities:

— Community activities winner: Ascension of Our Lord Council 9623 of LaPlace, Louisiana, for assisting flood victims in August 2016 and serving more than 5,300 hot meals for families. The council helped fill sand bags to deter the backflow from swelling rivers, removed damaged items from homes and installed wheelchair ramps for the disabled. Council members also provided food baskets at Thanksgiving and truckloads of toys and household items for Christmas; council members also donated more than $30,000.

— Culture of Life activities winner: Western Batangas Council 4668 of Balayan in the province of Batangas, in the South Luzon region of the Philippines. The council organized “Expectant Mother’s Day” and assembled and distributed care packages for pregnant women. Council members worked with vendors and doctors in the local community, including a pro-life gynecologist who agreed to provide free ultrasound examinations and consultations as well as medical care and advice. The council also arranged for a police officer and a registered nurse to discuss the women’s legal and medical rights.

— Youth activities winner: Our Lady of Czestochowa Queen of Poland Council 14004 of Radom, Poland, for sponsoring pilgrims during the 2016 World Youth Day in Krakow, Poland. The council helped the youth from the war-torn Zaporizhia region of Ukraine to attend World Youth Day by raising money through fundraisers that included concerts and auctions. The council also donated money to the Ukrainian group and volunteered during World Youth Day events.

— Council activities winner: St. Isidore Council 5898 of Leopold, Missouri, for prayers and fundraising efforts for a council member diagnosed with terminal cancer. Thirty to 50 people attended organizational meetings for the fundraisers; each gathering began with a prayer for the man’s health. Council members, working with community members, raised more than $80,000 for medical expenses through 12 events, including a softball tournament, a benefit dinner, auctions and a car raffle.

— Family activities winner: St. Joseph Council 8872 of Colbert, Washington, for helping a young boy with cancer. When 12-year-old altar server Gregory Morrow, was diagnosed with a cancerous brain tumor, his mother quit her job to care for him and planned to sell their house to cover medical expenses. The Knights hosted a pig roast that raised enough money to make needed improvements on the home to get it ready to sell and give the family an additional $16,000.

— Church activities: Winnipeg St. John Brebeuf Council 1107 of Winnipeg, Manitoba, for its Nativity float in a local parade. For the past five years the council has led the effort to design and construct a unique Christ-centered float for the local Santa Claus parade. Each year, a council member opens his farm’s heated shop where Knights from local councils and assemblies, in addition to local families, work together for hundreds of hours. This year, they constructed an illuminated Nativity float led by a group of 35 Knights. The council won the prize for best float in the parade.

NEXT: Example of founder of Knights ‘etched in our hearts,’ says archbishop