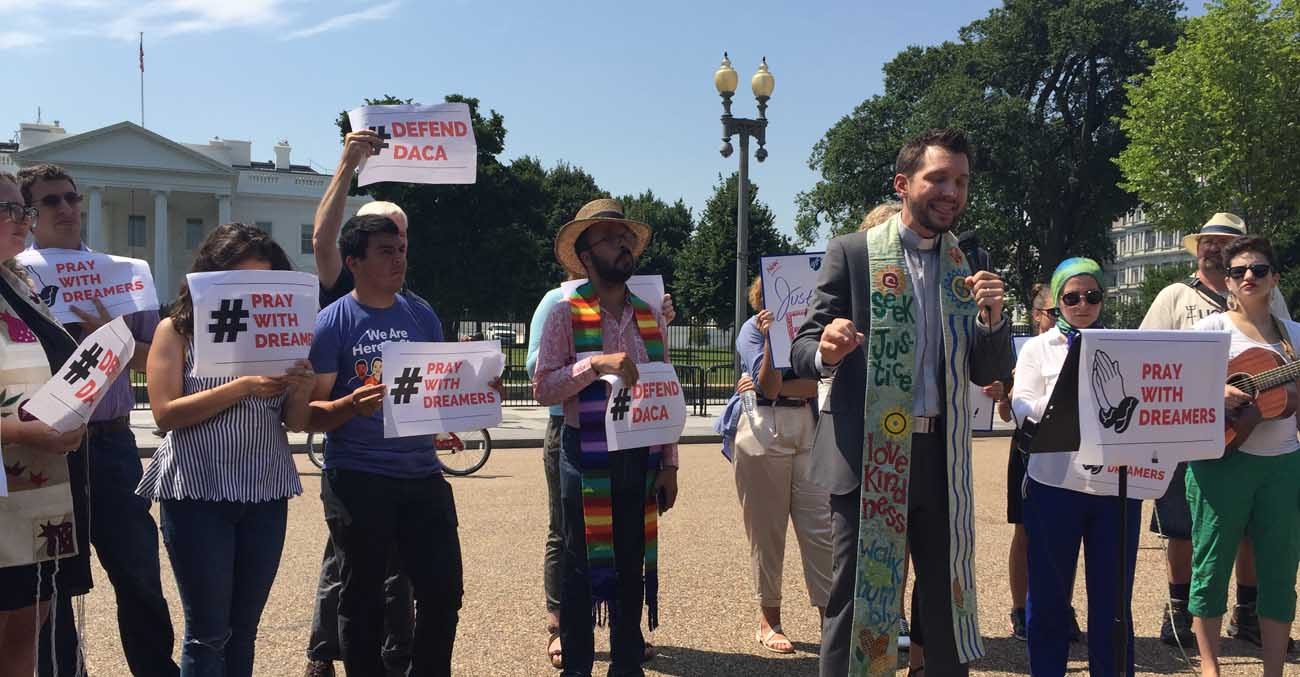 The Rev. Noel Andersen, of Church World Service in Washington, leads a group in prayer in front of the White House Aug. 2. Participants, who included Catholics, called on President Donald Trump to protect the Deferred Action for Childhood Arrivals program, known as DACA. It faces an uncertain future under Trump. (CNS photo/Rhina Guidos)

WASHINGTON (CNS) — In her last year of high school, concerned about the uncertain future that awaited her as a youth without legal documentation to be in the country, 17-year-old Claudia Quinones took her worries to her Maryland parish.

“I was feeling very hopeless. I prayed a lot that day and I was asking God with all my heart to have some type of immigration relief. A few weeks later, DACA was announced,” recalled Quinones, now a college student in her 20s at a university in the Washington metropolitan area, referring to the Deferred Action for Childhood Arrivals program.

The 2012 policy, popularly known as DACA, was implemented under then-President Barack Obama and while it does not provide legal status for youth who were brought to the country as children, like Quinones, it gives recipients a temporary reprieve from deportation and employment authorization in the United States — as long as the applicant meets certain criteria.

“DACA changed my life,” Quinones said in an interview with Catholic News Service. “I was able to get a job, start working and be able to enroll myself in school.”

Quinones, joined by clergy, religious and laity of various faiths, prayed in front of the White House Aug. 2, spoke of the opportunities and contributions she other recipients have made, thanks to DACA.

Catholics from organizations such Faith in Public Life and the Franciscan Action Network, members of the Sisters of Mercy and from Network, which is a Catholic social justice lobbying organization, joined religious leaders from other faith traditions in the summer heat, and publicly voiced their support of the program as tourists passed by the White House. They also called on others to join them for an Aug. 15 prayer vigil in front of the White House to mark the fifth anniversary of DACA, working to make sure it won’t be its last.

During the “Clergy Rally to Defend DACA” event, the Rev. Jennifer Butler, CEO of the Washington-based Faith in Public Life, said the young migrants “must not be ripped out of our churches, our pews, our classrooms.”

“We are praying, we are marching, we are speaking truth to power,” she said. “Protecting young immigrants’ future is a moral duty and it’s a theological duty. An attack on immigrants is an attack on the church. That which President (Donald) Trump does to these people, he does to Jesus.”

More than 1,600 religious leaders from around the country have signed a letter sent to the Trump administration asking to keep the DACA program intact, she said.

Trump campaigned on getting rid of the program but later walked back his position and said he was still thinking about what to do with the group referred to as “Dreamers,” who benefit from the DACA program.

“We are people who speak English, consider ourselves to be … I feel as American as my classmates,” Quinones told CNS. “I’ve been here since elementary school … and now college.”

Mercy Sister Anne Curtis, who attended the rally, said that since her religious order is involved with education, she felt the need to attend “in solidarity.” The concern, however, goes beyond the students and other young people affected, she said, and extends to their families, as well as what the country will lose if DACA, as well as other programs, are terminated.

“They’re great contributors to our society,” not just economically, but in what they bring to communities, said Sister Curtis.

DACA beneficiary Gerson Quinteros spoke of his love of coaching other youth in soccer and swimming, an opportunity that he would not have without the program’s work permit. He said DACA “helped me and many youth have work permits, have less fear of deportation and get better opportunities.”

But DACA is under attack this summer as officials from nine states joined Texas Attorney General Ken Paxton in urging the Trump administration to end it, threatening the government with a lawsuit Sept. 5 if the program continues. A different group of 20 attorneys general wrote to the administration urging the president to keep the program.

As summer nears, college and university administrators worry about the threat of the lawsuit and what it will mean for their returning students who still have no clear idea of what will happen to their only legal lifeline.

Groups such as the Ignatian Solidarity Network are rounding up signatures for a letter from educators at Catholic high schools as well as colleges that is addressed to Trump’s White House Chief of Staff John Kelly, who until recently was in charge of the Department of Homeland Security, asking him to maintain DACA.

Quinones said she hears of the animus by certain Catholics who do not support DACA or other immigration initiatives, but has a suggestion: “I would tell them to grab a cup of coffee, get to know me.”

Even with an uncertain future, only faith can get her through, she said, adding that she tries not to worry.

“I go to Mass every Saturday evening, “she said. “And every time the priest is talking to us about the Gospel, I feel that somehow it comes back to me.”

So far, God has come through, particularly in that moment five years ago when her future seemed bleak, she said.

“When I got DACA, life changed completely. It seemed that everything worked out,” she said.

Her relatives worry because after speaking out in favor of DACA, she’s been placed on a list asking the government to deport her. But she said she finds support in the groups like the one who stood with her in front of the White House.