Knights to send $2 million to restore Christian town in Iraq 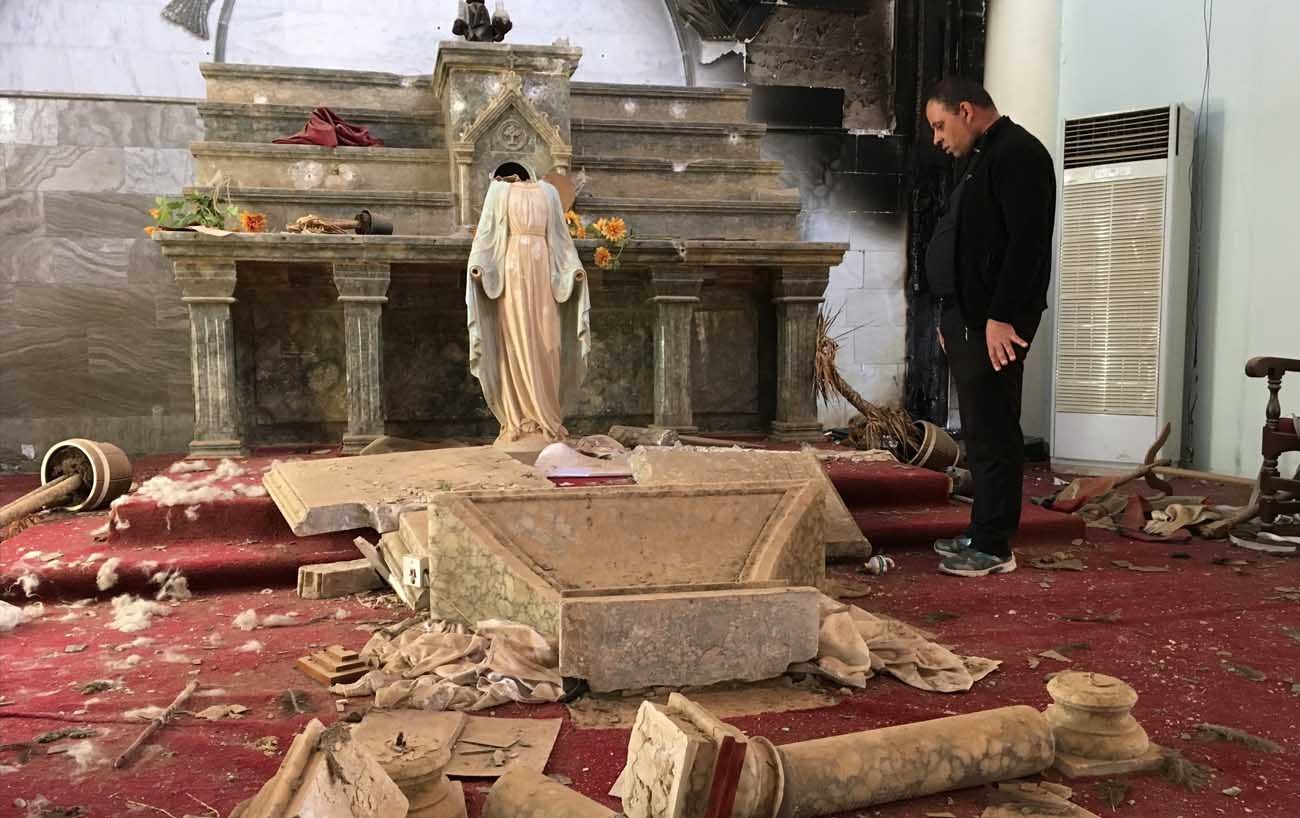 A Catholic church destroyed by Islamic State militants in Karamdes, Iraq, is examined by a priest following the predominantly Christian town's 2016 liberation. (CNS photo/Archdiocese of Irbil)

WASHINGTON (CNS) — In 2014, the Islamic State removed hundreds of families of religious minorities from their homes in Karamdes, a mostly Christian town on the Ninevah Plain in Iraq. Just over two years later, the town, also known as Karemlash, was liberated.

The Knights of Columbus will raise $2 million to assist these families in returning to their homes, according to Knights CEO Carl Anderson, who announced their pledge at the Knights’ 135th annual Supreme Convention being held Aug. 1-3 in St. Louis.

“The terrorists desecrated churches and graves and looted and destroyed homes,” Anderson said in his annual report, which was livestreamed from the convention. “Now we will ensure that hundreds of Christian families driven from their homes can return to these two locations and help to ensure a pluralistic future for Iraq.”

The Knights are following the example of the Hungarian government, whose new spending bill allowed for $2 million to be sent to the Archdiocese of Irbil in Iraq, assisting with the rebuilding of a Christian community near Mosul, Iraq.

Families who were previously displaced from their homes were able to return to their homeland because of the government of Hungary. This example served as proof to the Knights of the impact of returning families to their homes.

The cost of resettling one family is around $2,000, the amount the Knights are encouraging councils, parishes and individuals to donate.

“These Christian communities are a priceless treasure for the church,” Anderson said to the Knights attending the convention. “They have every right to live.”

The Knights have actively sought to provide humanitarian aid to Christians in Iraq, as well as Syria and the surrounding areas, donating over $13 million. In June, Anderson joined Rep. Chris Smith, R-New Jersey, and Rep. Anna Eshoo, D-California, in speaking in a news conference to urge the Senate to pass legislation that would provide U.S. humanitarian aid to the Archdiocese of Irbil, after the House unanimously voted in favor of the bill.

Pope Francis commended the Knights for their work in the Middle East in a letter sent to the Knights at the convention from Vatican Secretary of State Cardinal Pietro Parolin. The pope professed his “gratitude for the commitment of the Knights to supporting our Christian brothers and sisters in the Middle East,” according to the letter.

Pope Francis also described the Knights’ relief fund as “an eloquent sign of your order’s firm commitment to solidarity and communion with our fellow Christians.”

In a news conference July 27, Secretary of State spokeswoman Heather Nauert reaffirmed the use of the word “genocide” to describe the situation of Christians and other religious minorities in the Middle East.

“When we look at Iraq and we look at what has happened to some of the Yezidis, some of the Christians, the secretary (Rex Tillerson) believes, and he firmly believes, that that was genocide,” Nauert said.

In March 2016, then-Secretary of State John Kerry first declared that that ISIS militants’ actions in Iraq and Syria against minority Christian, Yezidi and Shiite Muslim groups was genocide.

In his annual report, Anderson urged each council of Knights to mark this day with “highest priority.”

The work to rebuild Karamdes will begin the first week of August and any funds raised will go directly to the project.

NEXT: The Catholic roots of the ‘immortal’ Henrietta Lacks