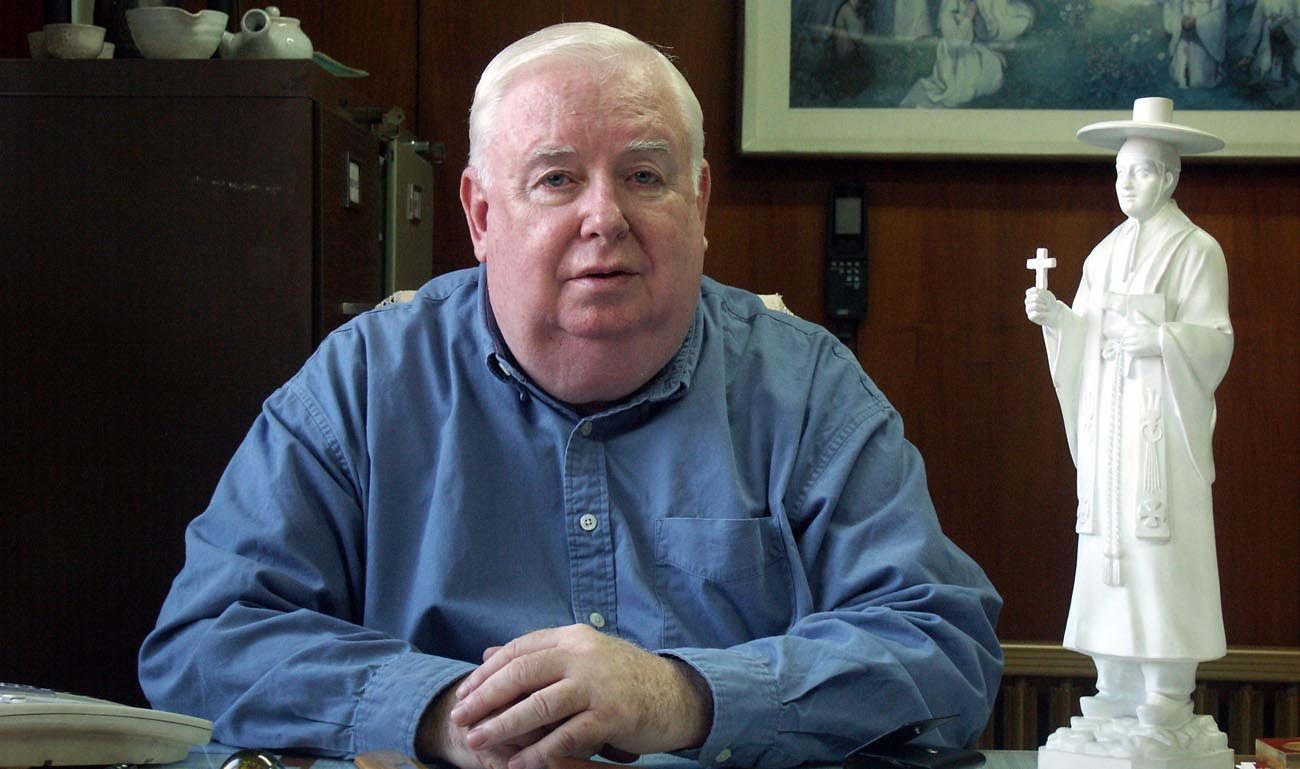 WASHINGTON (CNS) — Maryknoll Father Gerard Hammond, a Philadelphia native, has been named the winner of the Gaudium et Spes Award from the Knights of Columbus for the 84-year-old priest’s missionary work with tuberculosis patients in North Korea.

Father Hammond said he has gone to North Korea more than 50 times since 1995, with all trips coming under the aegis of the Eugene Bell Foundation, named for a Presbyterian minister who was sent to Korea as a missionary in 1895. The foundation — run by the grandson of another Presbyterian minister who served in Korea from 1912 to 1960 — provides food aid, health resources, and teaching, research and consulting services in North Korea.

Living in South Korea for the past 57 years, the priest estimated his mission trips have helped about 250,000 North Koreans stricken with TB, plus another 2,000-3,000 who have a multidrug-resistant strain of TB since he redirected the focus of his work a decade ago.

North Korea’s government “could refuse me entry if they wished, but I think we came to the conclusion that through the Eugene Bell Foundation, we’re a purely humanitarian organization, so they respect you,” he told Catholic News Service in a telephone interview Aug. 1 from St. Louis, where he was to receive the Gaudium et Spes Award, the Knights’ highest award, during the fraternal organization’s 135th international convention there.

“We trust them and they trust us. Trust is a very important attitude to have when you work with people,” the priest said.

Father Hammond said Maryknoll first had a presence in Korea in 1923. “Our roots are there. And if your roots are in one place, how can you forget the people who are there? How can you abandon them?” he asked. “Even though they (Maryknoll) had to leave the North, they felt they had to be there in some way or some fashion.” 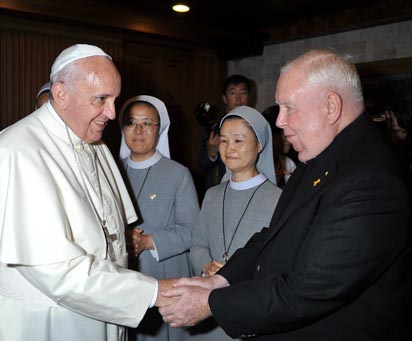 Pope Francis meets Maryknoll Father Gerard Hammond, a native of Philadelphia who has lived in South Korea since 1960, before a meeting with the bishops of Korea in Seoul Aug. 14. Father Hammond said he has made 51 trips since 1995 into North Korea to bring humanitarian assistance. (CNS photo/L’Osservatore Romano)

There are five Maryknoll missioners currently serving in South Korea.

Asked about the trepidation of his first visit to the North, he replied: “As a missionary, you always have to get used to the unknown — learning a language, a culture. It’s a learning experience for you. Not so much a trepidation, but how will I do this? What kind of reception would I receive? We emphasize mercy and compassion, but would that be understood? Everyone has a concern because of the newness.”

Father Hammond makes monthlong visits to North Korea twice a year, according to Father Raymond Finch, Maryknoll’s superior general, who spoke to CNS in an interview at Maryknoll headquarters in New York.

Of his fellow Maryknoller’s work, Father Finch said: “The program is an outreach to totally marginalized people in North Korea who will die if they don’t get this medication. The (North Korean) government allows the Bell Foundation to treat patients at four to give residential centers. Patients can stay until they are free of tuberculosis.”

He added: “Multidrug-resistant tuberculosis doesn’t know borders. If it’s not contained, it will move.” Treatment includes sputum testing, personal administration of drugs and tracking of progress.

Father Finch also said the Knights’ award comes with a $100,000 stipend, which will “go right back to the multidrug-resistant tuberculosis program.”

The Philadelphia-born Father Hammond said his work is “unimpaired and open but without politics and without dealing with some of the controversial issues that continue to be a problem between the West, particularly the United States, and North Korea.”

Father Hammond is far from a lone ranger in his North Korean visits. “Actually, there are a number of priests: one who is French, from the Paris foreign mission, one from the Oblates of Mary Immaculate, an Italian citizen with an Italian passport, a Guadalupe missionary from Mexico who also works in South Korea and the North. So together we go with the same focus,” he said. “There’s usually a doctor, a nurse and Dr. (Stephen) Linton (from the foundation) and maybe some benefactors and a sister who is a religious sister who helps out very much in coordinating the many things we do when we visit.”

The next trip is scheduled for three weeks in November, to visit 12 centers in four provinces on the west coast of North Korea. While Father Hammond expressed concern about a recent U.S. travel ban to North Korea, humanitarian exceptions are possible.

“Many people (in South Korea) have families in the North, but Korea is one, there’s no distinction in most Koreans’ minds,” Father Hammond said. “There is one Korea, one culture, two different systems. What is certainly ignored often is the fact that the country was divided without the consent of the people.”

PREVIOUS: Gomez: Our Lady of Guadalupe a key guide, protector for our times