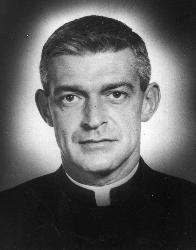 MARYKNOLL, N.Y. (CNS) — Fifty years after he put himself between a wounded Marine and fatal enemy gunfire, the story of Maryknoll Father Vincent R. Capodanno’s faith and sacrifice is being retold in a new movie.

His memory is cherished by those who knew him, his cause for canonization is promoted by those with whom he served and a new generation of young Catholics in his old neighborhood has come to know the Staten Island native.

Father Capodanno’s story may reach its largest audience yet when “Called and Chosen,” a 90-minute movie of his life, premieres Aug. 30 on EWTN.

The priest was serving a second tour of duty in Vietnam as a Navy chaplain ministering to Marines when he was wounded during a North Vietnamese ambush in the Que Son Valley Sept. 4, 1967.

Despite his injuries, he went to the aid of a fellow corpsman who was pinned down by an enemy machine gunner. While he administered medical and spiritual attention, the unarmed chaplain was struck by 27 bullets and died at age 38.

He was posthumously awarded the Medal of Honor in 1969, in addition to the Purple Heart, Navy Bronze Star and the Vietnamese Cross of Gallantry with Silver Star.

“He was an amazing man. You couldn’t talk to him and ever forget it,” George J. Phillips told Catholic News Service. Phillips, a retired Marine Corps captain, was with the chaplain’s Marines unit and “on the knoll when Father Capodanno was killed.”

He is chairman of the Father Vincent Capodanno Guild, an association established in 2013 to promote the chaplain’s cause for canonization.

Father Capodanno was born in New York in 1929, the 10th child of Italian immigrants. He was ordained a Maryknoll missioner in 1958 and served in Taiwan and Hong Kong before asking permission from his religious superiors to join the Navy Chaplain Corps. He was commissioned as a lieutenant in the spring of 1966 and went to Vietnam.

“He always referred to us as ‘my Marines,'” and he lived, ate and slept in the same conditions as the men, Phillips said.

“At the end of his first tour, Father Capodanno still saw the need for his work with ‘his Marines’ and asked for an extension through the Christmas holidays,” Phillips said.

In 2002, Father Capodanno’s sainthood cause was officially opened, giving him the title of “servant of God.” In 2004, initial documentation was submitted to Vatican Congregation for Saints’ Causes.

In 2013, Archbishop Timothy P. Broglio of the U.S. Archdiocese for the Military Services presided over the formal renewal of the opening of the cause and announced at that time that the newly established Father Vincent Capodanno Guild would serve as the petitioner.

The archdiocesan phase of the cause was closed this past May at an annual memorial Mass at the Basilica of the National Shrine of the Immaculate Conception in Washington. The findings of the local tribunal were sent to the Congregation for Saints’ Causes for review.

The idea for a movie about Father Capodanno’s life came from the guild, according to Phillips. “We wanted to tell his whole story, from growing up as a child of dedicated, practicing Catholics, through his high school and college years, to his priesthood and Vietnam experience,” Phillips said. The guild partnered with EWTN to produce and distribute the film, which Phillips said cost approximately $750,000.

James Kelty was chosen to produce, write, direct and edit the movie. Since 2010, Kelty has produced docudramas for EWTN about Sts. Isaac Jogues, Junipero Serra and Kateri Tekakwitha, among others.

Kelty said he started with a lot of archival photos and a few minutes of Marines video and determined the most compelling way to tell the story was to intersperse interviews with family members and former Marines with dramatizations of key events in Father Capodanno’s life.

Actor James Hutson portrays Father Capodanno as an adult. Kelty identified him through a traditional audition process. Damien Ferreira plays the priest as a young boy; Kelty discovered him while leading a pilgrimage tour along the Father Junipero Serra Trail.

“It’s important that the actors look somewhat like the people they play. While I was giving the talk, I noticed that a boy in the group looked like picture I had seen of the young Capodanno,” Kelty said. Damien had no previous acting experience.

At St. Adalbert School on Staten Island, Father Capodanno is part of the daily life of the student body.

“We pray to him every morning and there’s a picture of him in each classroom. We feel a bond with him. He grew up in this neighborhood and walked the same streets we do,” said Diane Hesterhagen, who is beginning her 21st year as principal of the school.

“We consider him a true hometown hero. He’s such an impressive role model of Christ-like sacrifice,” she said.

Father Capodanno’s late brother James helped the students make a documentary on his life for Instructional Television of the New York Archdiocese, Hesterhagen told CNS. “Jim let them see the Medal of Honor and touch the chalice he used in Vietnam. It created a real memory for the children and strengthened their faith,” she explained.

The daily prayer recited for Father Capodanno’s intercession “asks for help ‘on my own field of battle.’ Every kid has his own field of battle: a challenging home life, academic struggles, sickness. They can identify,” Hesterhagen said.

The cause for Father Capodanno’s canonization has become a mission at the school, Hesterhagen said. The playground was named in his honor 10 years ago, classes make occasional pilgrimages to his grave, and there is a monthly fundraising event to finance the completion of a bronze statue of the chaplain for the courtyard.

“This is going to be a saint who came out of our own neighborhood,” Hesterhagen said.

Father Capodanno’s Maryknoll congregation is encouraging and supportive of the movie and the sainthood cause, but is not deeply involved in either, according to Maryknoll Father Raymond Finch, superior general.

“We’ve provided access to our archives, a letter of agreement to the cause and small financial help for the movie, but the real momentum is coming from a base of people who are inspired by Father Capodanno,” he said.

An exhibit about Father Capodanno is on display at the Maryknoll museum.

“Father Capodanno is well-known and admired as an example of determination and staying with and caring for the men he was serving,” Father Finch said.

While Maryknoll priests have served as military chaplains in several wars, there are no active Maryknoll military chaplains now. Maryknoll does not have missionaries in Vietnam, but is in the “last phases” of a 20-year outreach and development program it conducted at the request of the Vatican, Father Finch said.

Phillips, Hesterhagen, and Father Finch are optimistic about Father Capodanno’s cause for canonization. They pointed to a July 11 apostolic letter in which Pope Francis approved the giving of one’s life in a heroic act of loving service to others as a new pathway to possible sainthood.

After a 50th anniversary Mass for Father Capodanno at the opening of the school year, students at St. Adalbert will complete a scrapbook to send Pope Francis.

“It’s about why we think Father Capodanno should be canonized and how his life and example have affected us as a school community. I believe he will be canonized in my lifetime,” Hesterhagen said.

NEXT: Friar’s remains exhumed, relics collected ahead of beatification Mass