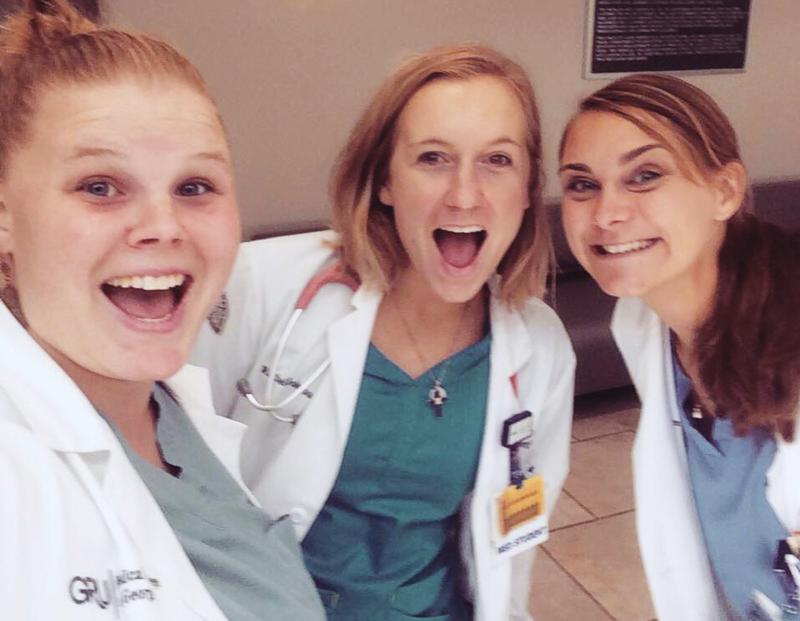 Drs. Alex Olney, Rachel Johnson and Anna Sulimirski Strasma are pictured in this May 18 photo. They first met at Prince of Peace Church in Flowery Branch, Ga., which sponsors a mission to Nicaragua. (CNS photo/courtesy Sulimirski Family via Archdiocese of Atlanta)

Drs. Rachel Johnson, Alex Olney and Anna Sulimirski Strasma began volunteering as children with Amigos for Christ, a nonprofit organization that grew out of a youth group project at Prince of Peace in Flowery Branch in 1999. At one time, the three were members of the parish.

Amigos volunteers work in and around the city of Chinandega, in the northwest part of the Central American country. They labor to bring clean water to communities, build schools, teach disease prevention, foster small economic development projects, and other initiatives.

John Bland, who at the time was a youth group leader at Prince of Peace, founded the nonprofit in the devastation after Hurricane Mitch, which struck Nicaragua, the second poorest nation in the Western Hemisphere, in late 1998.

Johnson and Strasma graduated from the Medical College of Georgia at Augusta University May 11 and have started residencies. Johnson’s residency is in internal medicine at WellStar Kennestone Regional Medical Center in Marietta. Strasma began her residency at Baylor College of Medicine in Houston in June.

Olney, also a graduate of the Medical College of Georgia, is in her second year of residency in Augusta in obstetrics and gynecology, which includes a research project on gestational diabetes.

Strasma first went to Nicaragua when she was 11 years old with her mother, Tessa Sulimirski, who had been volunteering with Amigos for a couple of years.

Since that first mission trip, Strasma has returned many times.

“I’ve gone every year, sometimes twice a year,” she told The Georgia Bulletin, newspaper of the Archdiocese of Atlanta.

During summers, she would sometimes go for three-month stays.

For the first mission trip, volunteers were building a school and Strasma worked in the feeding center after trying construction-related chores. A child herself, she also helped entertain the children of the village.

The first visit did make an impression on the young girl. In a “culture shock” experience, she noticed immediately the gap in what Americans have and Nicaraguans do not.

“It was really eye-opening. We were working on getting people out of the garbage dump,” said Strasma. “It really impacted me a lot.”

According to Amigos for Christ, most children in Nicaragua don’t finish the sixth grade. Skin diseases, parasites and respiratory diseases are rampant. This early experience helps Strasma even today to try to do things “for God and his glory.”

Each time she made the trip, she was able to be more helpful, from washing dishes and counting shovels to logistics and planning.

Eventually, she helped with health education programs, including lice control. The programs include teaching families about proper hygiene and sanitation or talking about “why you shouldn’t have an open fire in your house,” said Strasma.

Amigos for Christ has a clean-air kitchens project to install smokeless stoves in cooking areas. Many Nicaraguans cook with wood-burning pits inside their homes, which can lead to respiratory infections, including pneumonia.

Helping families have access to clean water is a primary goal of Amigos for Christ. Strasma shared that storing water in barrels has always been a practice in that culture, and a difficult one to correct. In 2016, Amigos volunteers connected 121 homes to clean water sources and constructed 41 bathrooms.

Johnson and Olney also both made numerous trips to the impoverished country through Amigos for Christ.

“Rachel and I have actually known each other since birth” and have lived “parallel lives,” said Strasma.

Olney was ahead of Strasma in school, and they met at Prince of Peace Church.

Strasma’s work with health education in Nicaragua prompted her to begin thinking of a career in medicine. After graduating from Georgia Tech, Strasma went on to attend the Medical College of Georgia. During the May hooding ceremony, she not only earned her medical degree but also a special award.

She was named recipient of the U.S. Public Health Service’s 2017 Excellence in Public Health Award. The agency created the award to inspire medical students to commit to public health and become leaders in the field. She is the first student from her college to receive the award.

In addition to her work in Nicaragua, Strasma volunteered at clinics that help the underserved and uninsured in Augusta. As an undergraduate at Georgia Tech, Strasma also served as the homeless ministry coordinator at the Tech Catholic Center.

According to Amigos for Christ, kidney disease kills more people each year in Nicaragua than in any other nation. The culprits may be chronic dehydration, exposure to chemicals or something in the diet.

“I’m already researching it,” she said. “I just love the kidneys.”

In between graduation and beginning her residency at Baylor, then Anna Sulimirski found time to marry fiance Sean Strasma May 27 at St. Teresa of Avila Church in Augusta.

Sean, a high school youth minister, has also been to Nicaragua with Amigos for Christ to dig water trenches. In lieu of gifts, the couple encouraged wedding guests to give to Amigos for Christ.

For Strasma, Amigos for Christ has been a motivating force in becoming a physician. As a couple they plan to continue service in Nicaragua.

“So the goal has always been to live there,” said Strasma. “I don’t think it’s a coincidence I went down there at such a young age.”