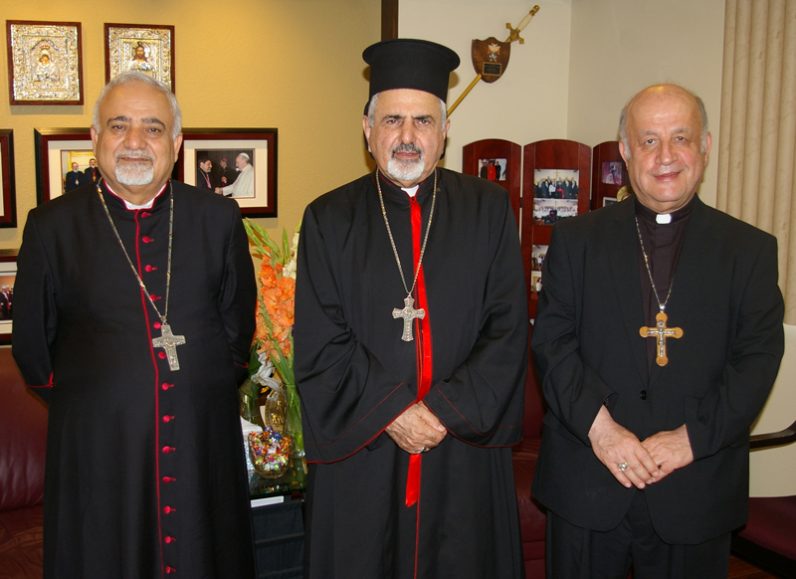 Nor does he shy away from calling out the West for not doing enough to protect Christian minorities.

“I can tell you, we’ve been not only abandoned by the Western countries, but even we have been betrayed,” Syriac Catholic Patriarch Ignace Joseph III Younan told The Southern Cross, newspaper of the Diocese of San Diego.

He made the comments in a recent interview at Our Mother of Perpetual Help Syriac Catholic Parish in El Cajon.

While the Christian minority in Syria and Iraq is composed of “peaceful people” who have been “working honestly for the well-being of their countries,” he said, these Christians are neither oil-rich nor do they represent a terrorist threat to the West. Therefore, he said, they have been essentially ignored by the West and “abandoned to our destiny.”

Patriarch Younan, whose patriarchal see is based in Beirut visited Our Mother of Perpetual Help July 24 as one stop on his pastoral visit to the Syriac Catholic Eparchy of Our Lady of Deliverance, which has its headquarters in New Jersey. The eparchy includes all Syriac Catholic parishes and missions in the United States and Canada.

The patriarch was accompanied by the head of the eparchy, Bishop Yousif B. Habash, and Syriac Catholic Archbishop Yousif Abba of Baghdad.

In conversation with The Southern Cross, Patriarch Younan lamented the “horrendous war” in Syria that is now in its seventh year and he contested the claim, which has been made by Western governments and media, that there is a moderate Muslim faction among the rebel forces.

Meanwhile, the situation in Iraq remains grim, he said. In that country, since the U.S.-led invasion in 2003, “chaos” continues to reign, he said, and more than 140,000 Christians — about a third of whom are Syriac Catholics — have fled the country.

This exodus has been a “real tragedy” and poses a grave threat to the continued existence of the region’s Christian community, which is not seeking any special privileges but simply the ability to live and worship without fear, he said.

“We Christians in the Middle East … are the indigenous communities of these countries,” Patriarch Younan said, noting that it was in this region that Christianity was born. “We’ve been there for millennia and we have been always persecuted. And now … our very survival is at stake.”

Many Syriac Catholics have simply given up on the possibility of stable government in their homeland and have relocated to other countries, like the United States, where they have been able to practice their faith in freedom and safety at parishes such as Our Mother of Perpetual Help.

Patriarch Younan, who as a priest helped establish Our Lady of Perpetual Help Church in 1994, said he hopes that the opportunities afforded by life in the United States will allow these members of his flock to grow even stronger in their faith. Through his pastoral visit, he hoped to impart a hopeful message to the first-generation immigrants and to encourage younger generations to walk a “path of joyful service.”

Regrettably, Patriarch Younan said, Western leaders have succumbed to “pandering” and utilizing “politically correct language” in their dealings with the Middle East.

He said that, unless the United States and European nations demonstrate that they have the political will to speak honestly with the region’s leaders, helping them to create “a civilized constitution” and insisting that they separate religion and politics, “there is no hope for the future.”