‘We are with you,’ says Pence during Florida visit with Venezuelan exiles 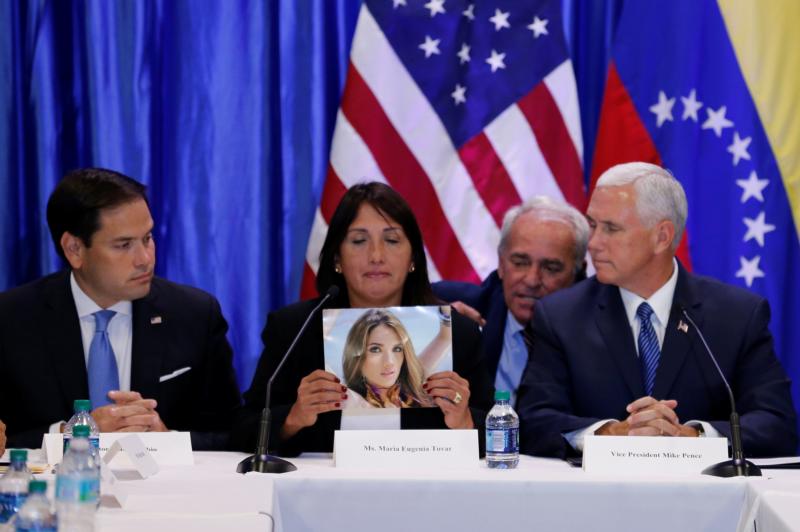 U.S. Sen. Marco Rubio, R-Fla., and Vice President Mike Pence listen to Maria Eugenia Tovar during a meeting Aug. 23 at Our Lady of Guadalupe Church in Doral, Fla., as she holds a picture of her daughter who was killed in 2014 during a protest in Venezuela. Pence met with members of the Venezuelan exile community, recent Venezuelan migrants, other local leaders and officials about the continuing devastation and unrest in in the country. (CNS photo/Joe Skipper, Reuters)

DORAL, Fla. (CNS) — They called Venezuelan President Nicolas Maduro a dictator and a gangster. They recounted personal experiences of torture, beatings and intimidation at the hands of government thugs and jailors.

They told of blatant disregard for the rule of law and the will of the people. A mother held up photos of her 22-year-old daughter, killed by a bullet to the head after a protest march.

About a dozen exiles of Venezuela’s “Bolivarian revolution” sat around a table in the rectory of Our Lady of Guadalupe Church Aug. 23 telling Vice President Mike Pence sad tales of their country’s 18-year tailspin, from democracy to dictatorship, from oil riches to widespread misery.

“I ask for all those who have fallen,” said an emotional Maria Eugenia Tovar, mother of Genesis Carmona, a university student and beauty queen killed during protests in 2014 in Valencia, in the state of Carabobo.

Tovar and other witnesses say the bullet came from government-sanctioned mobs — “colectivos” — who appeared after the military corralled the protesters and left. Feeling persecuted since then, Tovar and her family sought refuge in Miami.

So did Francisco Marquez, 30, an activist with Voluntad Popular (the will of the people) who became a political prisoner for four months in 2016. He recalled how his jailors forced him to march naked and “run under gunfire in handcuffs just to mess with my head.”

“I don’t think governments realize how much torture is done in Venezuela,” said Marquez, whose dual U.S.-Venezuela citizenship probably expedited his release. He noted that “to stay on the front page means a lot, more than you could possibly know, to people who are still in jail.”

Ramon Muchacho, the mayor of Chacao, a district of Caracas, escaped the country after being stripped of his position and sentenced to 15 months in prison for failing to halt anti-government protests.

“There is no democracy in Venezuela. There is a dictatorship in Venezuela,” Muchacho said, adding that he also sees no peaceful way to change it. “It is not possible for us, the Venezuelan people by ourselves, to bring back democracy and freedom to Venezuela. We need help.”

The exiles agreed that sanctions must be placed upon individuals who collaborate with the Maduro regime, including many who have fled with their wealth to South Florida. They added that other nations in Latin America, and especially the European Union, also need to impose sanctions and stop supporting the regime financially.

“We need more sanctions. We need to stop the enemy in Venezuela so they cannot buy tools for repression,” said Ernesto Ackerman, founder of a grass-roots group called IVAC, which stands for Independent Venezuelan-American Citizens.

Several of the exiles compared Venezuela’s situation to Cuba’s, but not because of ideology — although Venezuela has copied Cuba’s model for repression since the days of Maduro’s predecessor, Hugo Chavez. A number of top officials in the regime, including Maduro’s vice president, have been accused of narco-trafficking.

“We are fighting against gangsters,” said Warner Jimenez, a businessman and mayor of Maturin in the state of Monagas. His businesses confiscated, his family persecuted, he hid from the authorities for three weeks before making his way to South Florida earlier this year.

Carlos Vecchio, another activist with Voluntad Popular who spent three months in hiding before leaving his homeland, thanked the Cuban community already here for making exile “easier, because your family, without knowing, set the flag of freedom in South Florida.”

He was specifically addressing U.S. Rep. Mario Diaz-Balart, who sat in on the meeting along with U.S. Sen. Marco Rubio, R-Florida, and Florida Gov. Rick Scott. The stories were not new to them. But the exiles were buoyed by the fact that the vice president of the United States, fresh from a tour of Latin America, had asked specifically to come to Doral and listen to them in person.

“This room is a testament to the brutality of the Maduro regime,” said Pence. “I am deeply moved, and frankly deeply humbled, by the courage around this table.”

He promised to “convey your stories back to the president of the United States.”

Sitting in the church next door, waiting for the same politicians to speak to them, were about 1,000 more people, many of them members of the parish that has become the “spiritual home” of South Florida’s Venezuelan diaspora; a parish led by a Venezuela native, Father Israel Mago.

Those gathered in the rectory and in the church heard hopeful words from the vice-president regarding the current administration’s attitude toward Venezuela’s government.

“President Trump has made it clear that the United States of America will not stand by as Venezuela crumbles,” Pence told those gathered.

The Trump administration, he assured them, will work with other nations in this hemisphere to continue slapping meaningful sanctions against individuals in the Maduro regime — including Maduro himself, who already is one of only four heads of state directly sanctioned by the U.S. government.

The Trump administration “will continue to bring the full measure of American economic and diplomatic power to bear until democracy is restored in Venezuela,” promised Pence. “There’s more to come,” he added, avoiding specifics other than to say the U.S. seeks “a peaceable solution” to Venezuela’s woes.

He urged the countries of the region “to do more, much more,” but promised the Venezuelan community: “We are with you and we will stand with you … America first does not mean America alone … The birthright of freedom belongs to all of our people in this New World.”

PREVIOUS: Ignorance is fueling racism, and respect is the antidote, archbishop says

NEXT: Oklahoma set to welcome world for beatification of ‘ordinary’ native son