Ignorance is fueling racism, and respect is the antidote, archbishop says 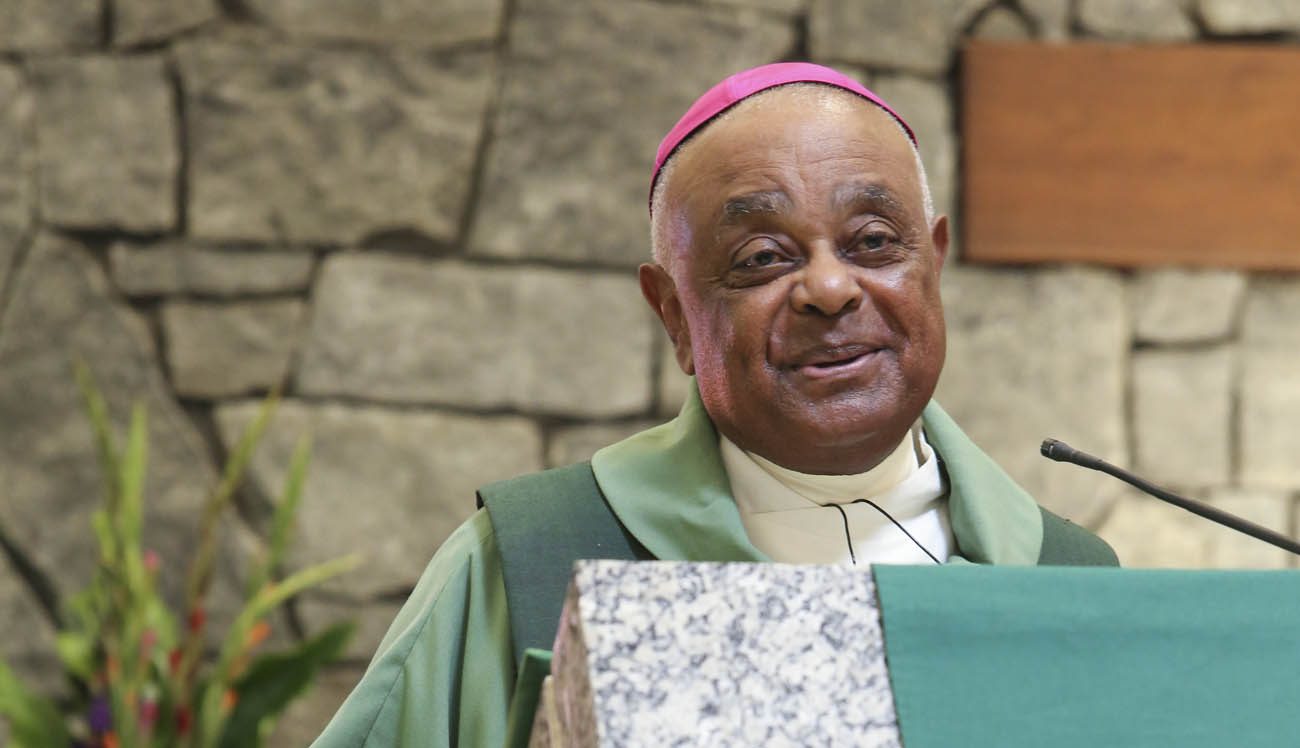 Atlanta Archbishop Wilton D. Gregory celebrates Mass Aug. 20 in the Catholic Center at the University of Georgia in Athens in the aftermath of a series of protests and racial violence in Virginia. (CNS photo/Michael Alexander, Georgia Bulletin)

ATLANTA (CNS) — Following a series of protests and racial violence in Virginia, Archbishop Wilton D. Gregory of Atlanta has conveyed a challenge for justice, civility and respect and delivered a personal message of encouragement to the Catholic community of the Archdiocese of Atlanta.

He spoke on these topics at an Aug. 20 Mass at the Catholic Center at the University of Georgia, Athens, and subsequently gave an interview by email to The Georgia Bulletin, the archdiocesan newspaper.

Following are the questions and answers from the spiritual leader of the archdiocese:

Q: What is the general status of race relations in the Archdiocese of Atlanta, as you see it? On the topic of race, what do you believe are the primary differences (if any) that exist between the metro, suburban and rural areas?

A: I have always believed that people are basically the same in spite of our many superficial differences. We have similar dreams, needs and fears. In each of the three dioceses where I have served, I have found that to be true. Racism needs ignorance as its oxygen. Wherever people are disconnected from one another, there is the possibility that they will begin to develop misconceptions about one another — flawed fantasies that have no bearing in reality.

Fortunately, here in Atlanta there continue to be many situations — employment, religious, residential and social — that bring people together so that there are frequent opportunities to encounter others as individuals. This is not a panacea nor has it eradicated all forms of racism, but it clearly helped in that struggle.

We have also been blessed with strong moral and spiritual leadership in our recent past: Dr. Martin Luther King Jr., Archbishop Paul Hallinan (Atlanta archbishop 1962-1968), Rabbi Jacob Rothschild, Coretta Scott King, Dr. Ralph Abernathy, Hosea Williams and Andrew Young, to mention only a few of the more renowned. These remarkable personalities offered opportunities for people to meet one another as persons of dignity and this has helped immensely. We are far from a perfect example of harmony, but we have been helped by strong leadership and shining moral examples.

We need more opportunities to encounter one another, and thus our metropolitan community provides a unique environment to counter the ignorance that fuels and too often ignites racism and violence. I am not naive — we have a great deal of work to do to bring about true racial harmony and justice.

One area that needs much attention is the restoration of civil discourse. Hate speech has recently been unleashed in ways that startle many of us and frankly should startle all of us. We now live in a “post-polite” world where rude and offensive language — that too frequently has led to brutal behavior — has been given free rein.

Such harsh and insulting language has too often given rise to acts of violence that destroy any sense of civility and public decorum. We should call such speech what it is: pornographic violence. It is a crime to produce, view or distribute some types of pornography. Could violent hate speech not be considered as another form of pornography?

The peace that the time-honored virtues of civility and respect at least attempted to establish has too often been shattered in ways that would astound our parents and society from the not too distant past. The rejection of “political correctness” has camouflaged hate speech and entitled itself as truthfulness. There are social and public institutions and individuals who must take a stand against this deterioration of the common good and social decency. And we, sisters and brothers, belong to one of the most important such institutions in the church that we serve.

We must become the counterbalance to laws that seem only to protect the rights of those who flood cyberspace with hatred. By becoming voices of reason and civility, we hope to become what Pope Francis has managed to become for the world. He speaks for a lasting and widespread peace that is a sign of the truth of the Gospel.

Q: What do you hear from Catholics in our community about where we stand on race relations as a church and a faith community in Georgia? Do people talk to you about this?

A: I must confess that I do hear from some of the finest people in our archdiocese who lament the state of community relations in this local Church. They tell me of their embarrassment and shame at the way people of color are still treated, and they include not just African-Americans, but Hispanics, our Jewish and Muslim neighbors, members of the LGBTQ communities, and the poor of all races and ethnic backgrounds. This is especially concerning when this despicable behavior comes from fellow Catholics who should well remember how we Catholics were victimized in the recent past, simply because we were Catholic.

Q: What are some things you think we are doing well in this local church to get to know others better, especially those coming from other cultures and nations?

A: Some of our parishes offer festivals that invite parishioners from various cultures and nations to bring cuisine, dances, festive garb, artifacts and music to a common celebration. These multicultural events help us to see and to appreciate the uniqueness of other peoples, even as we are exposed to the universally common love we all share for our families, good food, music and dance, and the joy of community. We really are the same.

We enjoy a proud and important relationship with our Jewish brothers and sisters, which has produced several acclaimed recent encounters. Our Eucharistic Congress invites Catholics from many traditions to come together, united by their love and reverence for the Blessed Sacrament and our common Catholic faith. Our schools are vitally important in helping our youngsters come to appreciate others as friends and neighbors. Recently, the Office of Intercultural and Ethnic Diversity was established and has been surveying the attitudes of our Chancery staff in dealing with diversity concerns. This office is commissioned to work across cultural and ethnic lines to bring our people and programs together in a more coordinated fashion. These are a few of the ongoing opportunities to draw people together across this extraordinary local Church.

Q: You recently confirmed, in another interview, that the U.S. bishops are currently working on a successor document to the 1979 “Brothers and Sisters to Us,” the bishops’ last joint pastoral statement on race. You indicated that this time, the document will have a broader focus, including not simply African-American concerns but also those of Hispanics, Asians and other communities. Can you share more about this document?

A: The drafting process for this USCCB (U.S. Conference of Catholic Bishops) pastoral is well underway. I have mentioned that the scope of this pastoral letter has been broadened to include attention to the concerns of other cultural, racial and societal groups since we know that prejudice and intolerance cross many different areas of public life and often impact people who find themselves demeaningly labeled as “other.” The hatred and denunciation of the “other” is a pastoral concern that needs the breadth of this letter to link our efforts with our ecumenical and interfaith partners as together we confront this plague that has recently seized such public attention and become the focus of so much national concern.

Q: How are these problems with race relations connected to the treatment of those in the immigrant community?

They are connected because both of these situations deny the dignity and equality of people. They both are predicated on the false notion that some people are not worthy of belonging in this nation, which from its very foundation has been a nation comprised of people who mostly have come here from other places — some in chains and others in search of better lives for themselves and their families.

The harsh rhetoric and punitive treatment of immigrants who may or may not possess current documentation is essentially no different from the hatred and bigotry that people of color have endured from the time we were brought to these shores from Africa. Much of this sinful and inhuman behavior comes from the belief on the part of some people that the benefits of citizenship belong in a unique way to those of the dominant culture. Some of this hatred and brutality stems from the experience of poverty and despondency that members of the dominant class may endure and falsely assign to the allocation of rights and privileges and advantages to “others.” Some of the racial hatred and hostility against immigrants results from the awareness that our nation is fast becoming a multicultural reality with no dominant community and no ethnic majority.

PREVIOUS: Air Force pilot shot down over Cambodia and MIA for 46 years laid to rest

NEXT: ‘We are with you,’ says Pence during Florida visit with Venezuelan exiles