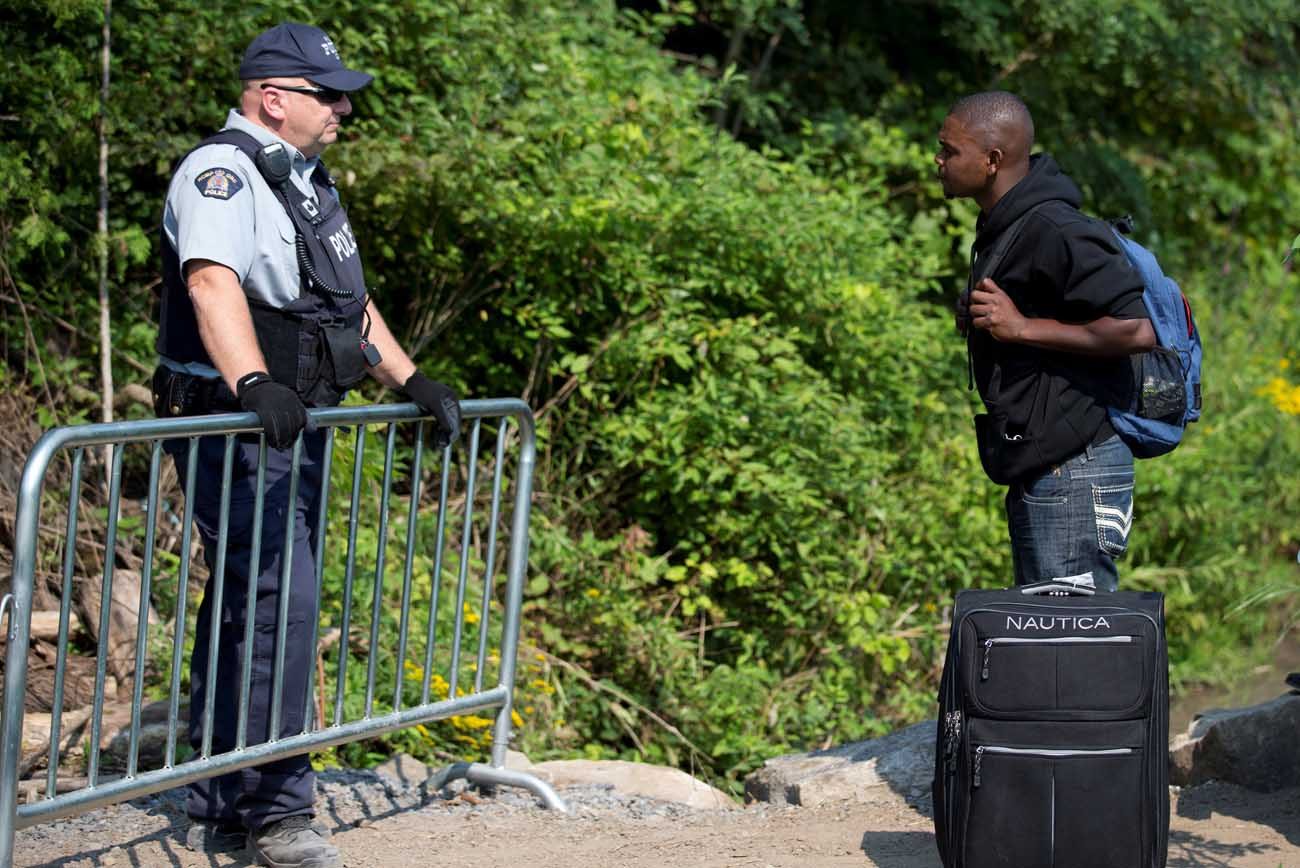 A Haitian man talks with a Royal Canadian Mounted Police officer as he waits to cross the U.S.-Canada border into Quebec Aug. 29. (CNS photo/Christinne Muschi, Reuters)

OTTAWA (CNS) — As waves of asylum seekers continue to cross illegally into Canada from the United States, Catholic dioceses in Quebec and eastern Ontario are mobilizing to provide them with food, shelter and pastoral support.

“It’s a gesture of solidarity toward brothers and sisters,” said Auxiliary Bishop Alain Faubert of Montreal.

An estimated 7,000 men, women and children, primarily Haitians, have entered Canada over the summer since U.S. President Donald Trump ended a program offering temporary asylum to Haitians displaced by that nation’s 2010 earthquake.

About half the asylum seekers that have crossed into Canada have ended up in Montreal after being processed. Whether they remain in Canada will be determined in coming months at immigration hearings.

Bishop Faubert said the church is staying silent on politics, but he is aware of “what the government is doing and not doing.”

“We see people who need our help,” he said. “We can’t stay with our arms crossed.”

That help includes providing lodging, clothing and pastoral support, but also pencils and notebooks for school, he said. “This is Christ knocking on our door.”

To process the asylum seekers, the Canadian military has erected tent cities in Lacolle, Quebec, near the New York border, and at a government-owned conference facility in Cornwall, Ontario, about 90 miles west of downtown Montreal.

By the third week of August, more than 50 tents were standing outside the Nav Centre in Cornwall, where the Canadian Conference of Catholic Bishops will hold its annual plenary Sept. 25-29. The tents were not yet occupied, but some Haitians were being accommodated inside the conference centre alongside other guests.

Archbishop Terrence Prendergast of Ottawa, currently the apostolic administrator of Alexandria-Cornwall, said he has visited the facility. He said the Haitians seemed at ease.

Archbishop Prendergast was told Haitians had attended Mass in a few of Cornwall’s Catholic parishes and had “asked about pastoral care.” He appointed Deacon Pierre Aube to look after the pastoral needs, along with two French-speaking priests, he said.

The tents have heaters, but are not winterized, said a soldier involved erecting the tent city. Most tents accommodate 10 people, but smaller units accommodate families of five.

The Montreal Archdiocese has appealed for government funds and other forms of assistance, as it did in 2015 in response to the Syrian refugee crisis.

In an Aug. 22 pastoral letter, Montreal Archbishop Christian Lepine wrote that the diocese’s sponsorship program “has recently evolved due to events surrounding the influx of asylum seekers.”

The archbishop said the parish of Notre-Dames-des-Victoires, “in an evangelical spirit of welcoming,” will house asylum seekers in its vacant rectory.

“This space, with a dozen rooms, will serve as temporary and safe housing for the time it takes to handle the required migration phases,” he wrote. “The welcoming of pregnant women and single mothers, who are considered to be the most vulnerable and at-risk, are our priority.”

By entering Canada illegally, the asylum seekers hope to avoid being returned to the United States under provisions of the Safe Third Country Agreement between the two countries. It requires asylum seekers to file their claims in the first safe country in which they arrive. But the agreement only applies to people who cross the border legally at recognized entry points, not to those who enter illegally elsewhere. These people must now prove they are legitimate refugees who face persecution if they are returned to their home country.

“There is uncertainty for people,” said Bishop Faubert. “Who are we to judge why they crossed the border?”

People might say these are “not refugees, their lives are not in danger, but we don’t know that,” he said.

Bishop Faubert said how Canadians respond to the asylum seekers may be a test of their core values.

He admitted he does not have “a special telephone line with God,” to help him “understand the signs of the times,” but he said some refugees will come because of war, but many more will be economic migrants and refugees fleeing poverty and the effects of climate change.

“This little wave, it could become big waves,” he said. “We don’t have too much time to reflect on this matter and make up our minds.”