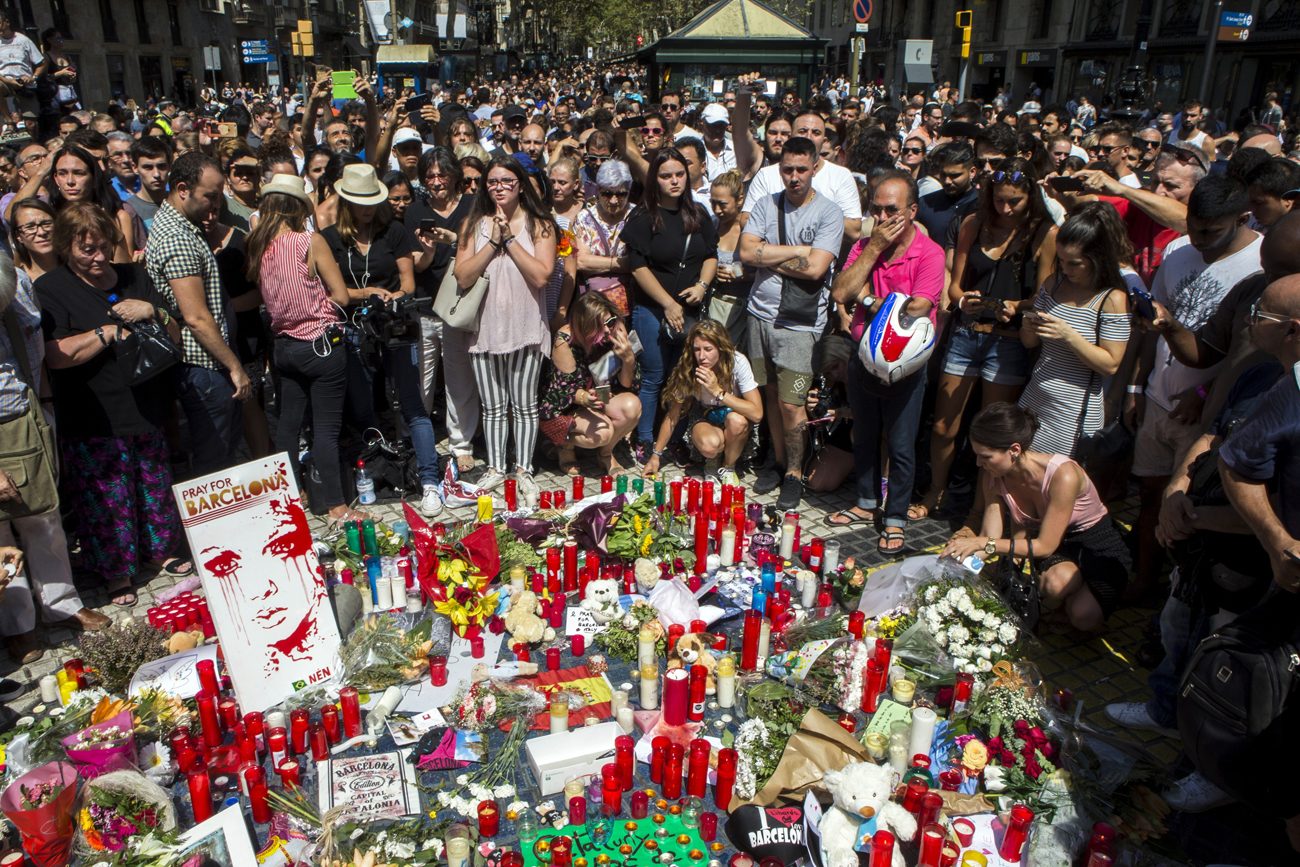 Pope Francis, U.S. bishops and others weighed in with prayers and rejection of the Aug. 17 attacks in Barcelona and Cambrils, where cars drove into pedestrians. The Islamic State group claimed credit for the attacks. Thirteen were killed in Barcelona; one pedestrian and five suspects were killed in Cambrils.

“People are deeply shocked and saddened by this totally random event,” said Msgr. Josep Ramon Perez, dean of Barcelona’s Catholic cathedral. “While many are naturally asking what’s happening to the world to make such things possible, many also recognize that the most important response is to pray for peace.”

Thousands attended a midday vigil Aug. 18 in Barcelona’s Plaza de Catalunya, attended by Spanish King Felipe VI and government and political party leaders from across the country. Spanish police asked mourners not to bring bags or backpacks to the vigil, which was accompanied by parallel commemorations in Madrid and other cities, as well as at the European Union’s headquarters in Brussels.

Barcelona Cardinal Juan Jose Omella interrupted his retreat Aug. 17 to return to his city and be close to his people. The Archdiocese of Barcelona released photographs of him visiting victims of the attack at the hospital. 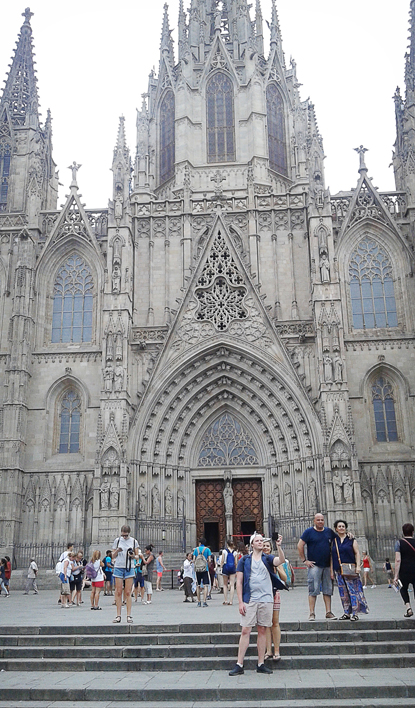 Barcelona cathedral is seen near the Las Ramblas district of Barcelona, Spain, July 31. As part of a security lockdown, the cathedral and neighboring churches were closed for several hours after the terrorist attack Aug. 17. (CNS photo/courtesy Sherri Wyatt)

In a message to Cardinal Omella, Pope Francis denounced the “cruel terrorist attack” in Barcelona and said such “blind violence,” which sows death and pain, is “a great offense to the Creator.”

The papal message, sent by Cardinal Pietro Parolin, Vatican secretary of state, included prayers for the eternal repose of the dead, and for their families.

Pope Francis, it said, also prayed that God “would help us continue working with determination for peace and harmony in the world.”

In an interview Aug. 18, Msgr. Perez said Barcelona’s cathedral and neighboring churches had been closed after the attack as part of a security lockdown, forcing visitors and pilgrims to remain inside until late evening.

“The terrorists who carried out this action have nothing to do with ordinary people here,” Msgr. Perez said, noting that “local Muslims are just as shocked and horrified as everyone else.”

Candles, flowers and messages of solidarity were placed in memory of victims at various city locations.

Meanwhile, the Tarraconense bishops’ conference, grouping Catholic bishops from Spain’s Catalonia region, said members were “completely dismayed” by the “barbarity of the attack and the contempt it implies for human life and its dignity,” adding that Barcelona and its inhabitants had always been “committed to the cause of peace and justice.”

In an Aug. 18 interview with the Spanish church’s COPE news agency, Cardinal Ricardo Blasquez, president of the Madrid-based bishops’ conference, said Spaniards would be “especially beaten” after the Barcelona outrage, which had “inflicted a wound on everyone.” He urged citizens to remember that Muslims were “the main victims” of Islamic State and not to “criminalize” them for the attack or “identify terrorism with Islam.”

“Far from being terrorist violence, the true road to building a future of peace, now and forever, lies in respect for all people,” Cardinal Blasquez said.

Following the first attack, Bishop Oscar Cantu of Las Cruces, chairman of the USCCB Committee on International Justice and Peace, said the bishops’ conference “unequivocally condemns this morally heinous act and places itself in solidarity with the people of the Archdiocese of Barcelona and Spain at this terrible time of loss and grief.”

“Terrorist attacks on innocent civilians can never be justified,” he said. “To directly attack innocent men, women and children is utterly reprehensible.”

The attack is the latest of several in which trucks and vans had been driven at high speed through pedestrian zones in Europe.

In an Aug. 18 message, Archbishop Georges Pontier of Marseille, president of the bishops’ conference in neighboring France, said the Barcelona atrocity was “an insult to the Creator,” and would unite Catholics in their determination that “evil will not have the last word.” In Nice, France, in July 2016, 86 people were killed and 458 injured in a similar attack with a 19-ton truck.

The Las Ramblas attack was Spain’s worst since March 2004, when Islamist militants detonated 10 bombs on commuter trains in Madrid, killing 191 people and injuring more than 1,800.

NEXT: Pope urges respect for the life and dignity of migrants, refugees