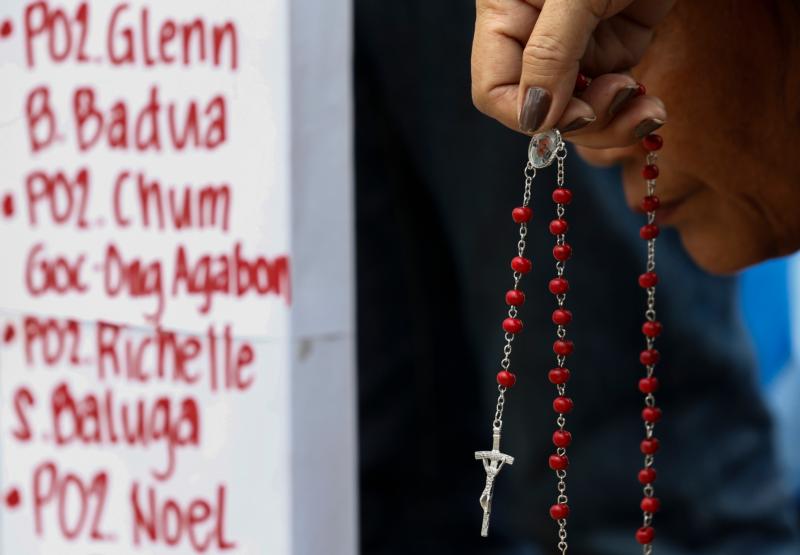 A Filipino prays next to the names of police officers who were killed in a botched anti-terrorism operation in 2015 in this Jan. 25 photo. (CNS photo/Rolex Dela Pena, EPA)

VATICAN CITY (CNS) — Pope Francis sent a hand-signed message to the Italian synod of the Methodist and Waldensian churches, saying that it is more important than ever for Christians to witness together that God is stronger than the violence and evil taking place in the world.

“Christian witness cannot give into the logic of the world,” the pope wrote to the synod’s 180 delegates — half pastors and half laypeople — meeting Aug. 20-25. “Together let’s help each other choose and live according to the logic of Christ!”

“It is important to walk together toward full unity with the gaze of hope,” the pope said. “Recognizing that God’s presence is stronger than evil is so important, especially today in a world marked by violence, divisions and indifference, where the selfishness of self-affirmation without regard for others obscures the simple beauty of welcoming, sharing and loving.

If all Christians keep their gaze firmly on Jesus, he said, they will grow closer to Jesus and to one another, building relationships that “are not only formal and correct, but fraternal and lively.”

“The Good Shepherd wants us to walk together and his gaze encompasses all of us, his disciples whom he wants to see fully united,” the pope said.

NEXT: Pope leads prayers for an end to ‘inhuman violence’ of terrorism