Italians debate whether rescuing migrants at sea can be a crime 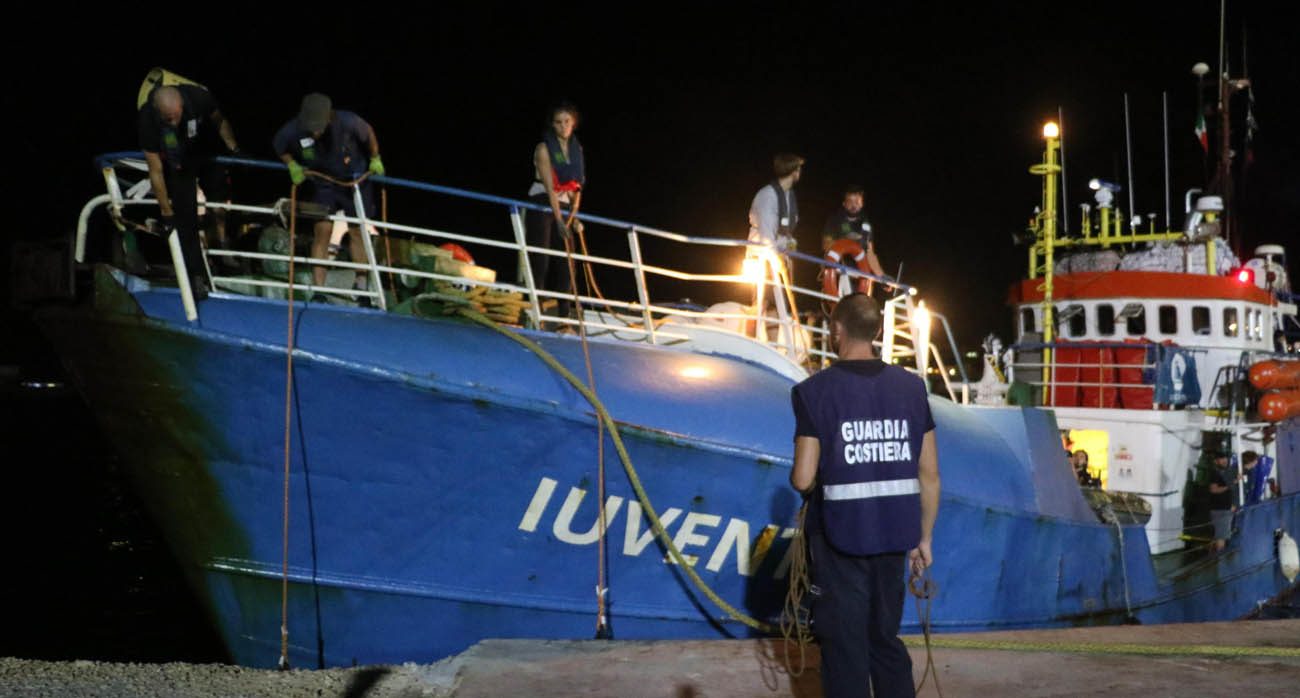 VATICAN CITY (CNS) — As temperatures heated up in Italy in late July and August, so did the debate over migration policy and, particularly, over the rescue of refugees and migrants attempting to cross the Mediterranean Sea.

Italian officials are investigating an Eritrean Catholic priest and a German humanitarian organization on suspicion of “aiding and abetting illegal migration,” but overcrowded and unseaworthy boats carrying migrants and refugees continue to make their way toward Italy’s shores.

For years Italy has been the first port of call for refugees and migrants desperate to reach Europe and, as Pope Francis often has noted, the country has received little help from its European Union partners in rescuing, caring for and processing the newcomers.

The EU’s 2013 Dublin Accord stipulates that requests for asylum and migrant processing must be handled by the first EU country a migrant or refugee enters. Because of its geographical proximity to Libya — the primary port of departure to Europe — Italy usually is that first country, although Malta also is a frontline destination.

In late July, Italy’s prime minister announced an agreement with the Libyan government to have Italian military ships join Libyan ships in patrolling the Libyan coast. Prime Minister Paolo Gentiloni said the aim was to halt human trafficking and migrant smuggling. Migrants pay criminals for a place on the boats.

But, of course, many Italian politicians applauded the move as the best way to stop the influx of migrants and refugees.

Pope Francis, the Vatican office for migrants and refugees and a host of Catholic agencies and humanitarian organizations have long argued that the best way to defeat the traffickers is to expand quotas for legal immigration throughout Europe. Bypassing the traffickers would allow countries to organize the reception and would save migrants from the dangers that come from the sea and from extortion by the traffickers and a host of players that prey on the desperate in Libya.

The Italian government’s second approach to handling the migration crisis was to attempt to forge an agreement with the nongovernmental organizations who are rescuing people at sea, providing food, water, medical care and safe transport to an Italian port.

Right-wing political groups have claimed the likelihood of being rescued simply emboldens smugglers, who provide boats that are in increasingly bad shape, betting those onboard will be rescued.

Italy asked the NGOs to sign a “code of conduct” promising, among other things: to refrain from communicating with or signaling to refugee boats in a way that facilitates their departure from Libyan waters; to inform the Rome-based Maritime Rescue Coordination Center about migrant sightings and rescue operations; to ferry rescued persons directly to a port without transferring them to or from other rescue boats; and, when requested, to allow police onboard to investigate possible cases of migrant smuggling or human trafficking.

Some NGOs, like Doctors Without Borders, refused to sign the agreement. The rule against transferring migrants between boats would mean all rescue vessels would be making long roundtrips, rather than having the bigger boats go to port and smaller boats continuing to patrol, the organization said. In addition, the organization asked for a stipulation that investigating police would not be armed because it does not permit weapons aboard its ships; the Italian Interior Ministry declined to amend the agreement.

Jugend Rettet, a Germany-based group that raised money from young Europeans to buy a rescue ship, also declined to sign the agreement.

Italian authorities seized the Jugend Rettet’s ship, the Iuventa, Aug. 3, claiming that on as many as three occasions, the group did not technically rescue migrants at risk in the sea, but rather transferred them to the Iuventa from the hands of smugglers. The prosecutor in the case emphasized, however, that the group is not accused of accepting money or anything else from the smugglers.

Also under investigation for “aiding and abetting illegal immigration” is Father Mussie Zerai, a Rome-based priest from Eritrea and hero to many refugees and aid agencies that assist them. Since 2003, when someone wrote his phone number on the wall of a migrant detention center in Libya, Father Zerai has responded to distress calls from migrants on sinking boats in the Mediterranean and forwarded the position of the boats to the Italian and Maltese coast guards and to NGO rescue ships.

He told Avvenire, the Italian Catholic newspaper, that he never has had contact with Jugend Rettet, if that’s how his name came up, and he has never contacted any NGO for a rescue without informing either the Italian or the Maltese coast guard. The charges, he said Aug. 9, are “slanderous.”

For Vatican officials, Catholic aid agencies and even a top official from the Italian foreign ministry, the campaign against humanitarian agencies is a bizarre twist in the debate over the best way to handle the migration crisis.

Mario Giro, vice minister for foreign affairs and the former Africa expert for the Catholic Sant’Egidio Community, said Jugend Rettet and others may be examples of “humanitarian extremism,” but that is more humane and more Christian than any of the other extreme positions being voiced.

“Are the NGOs right to save lives in the sea or should their salvation be the exclusive prerogative of state action,” Giro asked in a guest column in Avvenire Aug. 8. Deciding whether to proceed with criminal charges against Jugend Rettet, the Italian magistrates will have to determine “how to ‘sanction’ those who do not respect some of the rules of conduct established by the government without introducing — as an Avvenire editorial phrased it — a kind of ‘humanitarian crime.'”