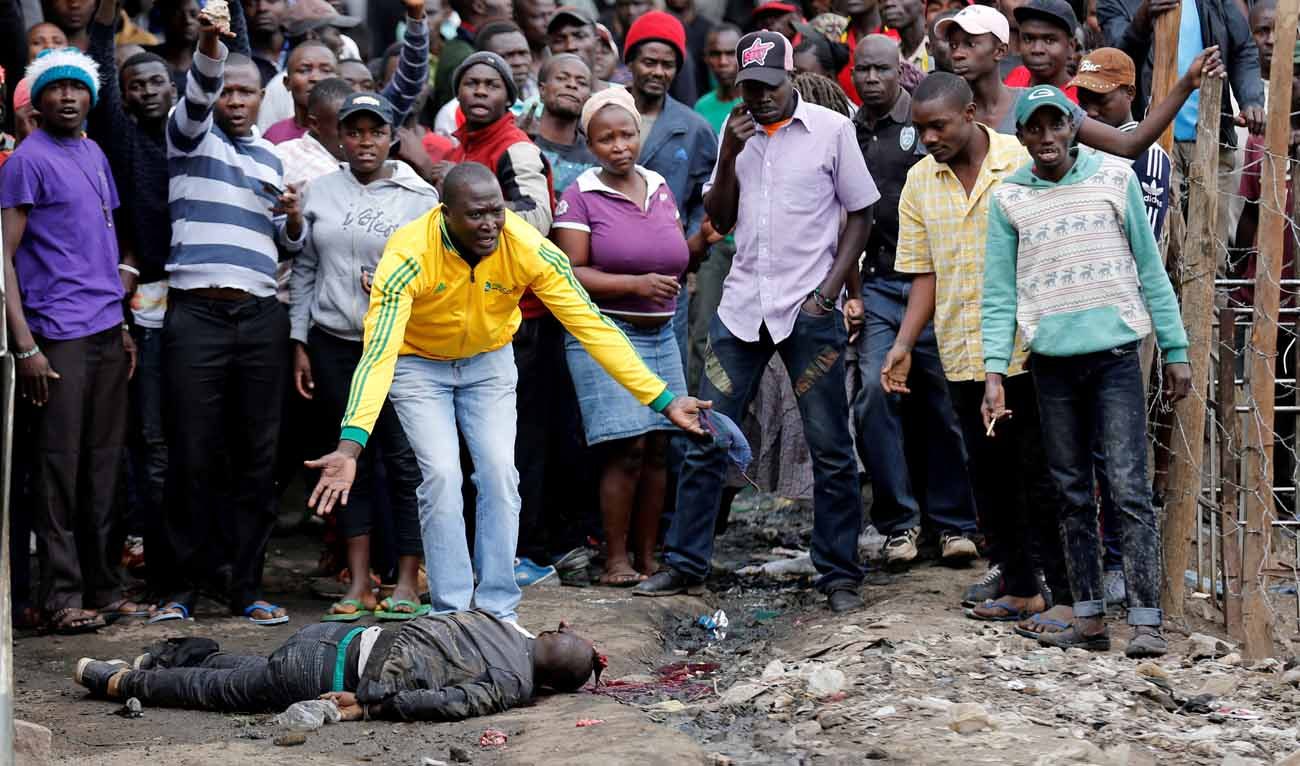 A man reacts after a protester was killed killed by riot police Aug. 9 in Nairobi, Kenya. Protesters and police in Kenya have clashed after the leader of the government opposition claimed he was cheated of victory by a hacking attack that he said manipulated the results in the country's presidential election. At least 3 people have been killed. (CNS photo/Thomas Mukoya, Reuters)

The protests had ignited slums in Nairobi and Kisumu after Raila Odinga, the main opposition candidate, rejected the provisional early results, which showed incumbent President Uhuru Kenyatta had taken an early lead in Aug. 8 voting.

“We are saying to the actors (politicians), you were given an opportunity to go around the country; now can you stop and reflect and allow Kenyans to pause as they wait for the results,” said Bishop Alfred Rotich, retired head of the country’s military diocese, at an Aug. 10 news conference.

In Eldoret, Bishop Cornelius Arap Korir issued a similar appeal. In some areas, his diocese is still recovering from a deadly postelection violence that occurred 10 years ago.

“We urge calm. Those who (are) aggrieved should go to court,” said Bishop Arap Korir.

The Multi-Sectoral Forum, a group of religious leaders that has advocated for peaceful elections, called on Kenyans “to remain calm and peaceful (and) resume day-to-day operations, appreciating that elections are important, but must not be the end of life.”

Explaining why Kenya has been jumping from crisis to crisis in elections, Bishop Rotich said: “Politicians spent a lot of money for many years, five years, campaigning without stopping. Despite the anxiety, they don’t have time to reflect.”

He suggested politicians should be restricted to two-month campaigns and recommended stress relief activities for after elections.

“It was a weekday, so worship activities were not disrupted,” he said.

In some remote regions, the Catholic Church is the only institution with structures that can allow peaceful voting, protection of voting material and of officials.

PREVIOUS: Italians debate whether rescuing migrants at sea can be a crime

NEXT: Cardinal calls Salvadorans to reflect on true meaning of martyrdom