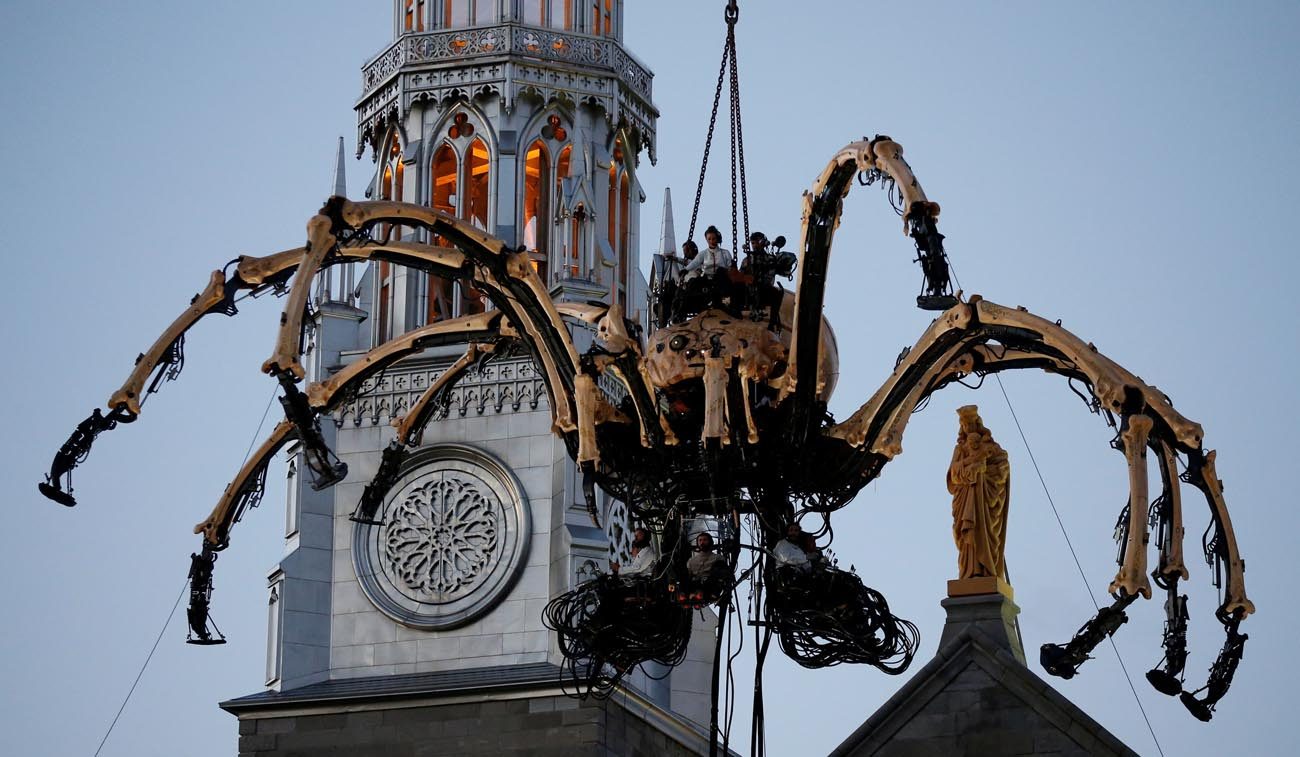 A giant mechanical spider is seen during an art performance in front of Notre-Dame Cathedral Basilica in Ottawa July 27. (CNS photo/Chris Wattie, Reuters)

OTTAWA, Ontario (CNS) — The archbishop of Ottawa expressed regret that several Catholics were shocked at the sight of a giant robotic spider perched on Notre Dame Cathedral.

Archbishop Terrence Prendergast said he was surprised by the negative reaction to an artistic initiative after critics called the spider’s placement “sacrilegious,” “demonic,” and “disrespectful” of a sacred space.

“My cathedral staff and I anticipated that some … might object, but thought it would be minimal, as nothing demeaning was intended in the spider being near the church,” said the archbishop in an email interview with Canadian Catholic News.

“I regret that we had not sufficiently understood that others would see this event so differently. I say to those who were shocked that I understand that this would have been upsetting for them and that I regret that a well-intentioned effort to cooperate in a celebration was anything but that for them.”

The spider, named Kumo, is one of two giant robots created by a street theater company of artists, technicians and performers based in Nantes, France. The company, La Machine, was in Ottawa July 27-30 as part of celebrations marking Canada’s 150th birthday.

The spectacle of robots, music and other special effects drew tens of thousands to Ottawa’s downtown.

The show opened July 27 in the evening, with Kumo “waking up” to organ music from inside the cathedral. As the spider, suspended from cranes, climbed off its perch between the towers, “snow” fell from above as part of the event’s special effects.

“I don’t understand how allowing a mechanical spider to stand on the cathedral is anything but disturbing, disappointing and even shameful,” wrote Diane Bartlett on the archbishop’s Facebook wall.

Others defended the archbishop’s decision.

“While the viewer may find the juxtaposition jarring, I gather it’s supposed to be,” wrote Kris Dmytrenko. “But sacrilegious? C’mon, give your archbishop a break. This civic engagement with art recalls the Vatican’s Courtyard of the Gentiles project. Culture is a bridge.”

The decision to participate in the show was motivated by a desire to engage with the wider Ottawa community, said Archbishop Prendergast.

“We make use of the city to obtain permits for our events, and they are most cooperative,” he said. “The Good Friday Way of the Cross lets us have access to public venues (Supreme Court, Parliament Hill, the plaza in front of the National Gallery), and the police offer a security escort.

“We try to be good citizens, good neighbors and cooperative,” he said.

“To the extent that we did see symbolism, it was that, afterward, Our Lady would continue to reign, something I mentioned in a tweet right after the Thursday performance, as people I respect began to make their objections known.”

Organizers approached the cathedral staff last year. They wanted to position Kumo on the cathedral because it is across the street from the National Art Gallery, which features a large spider sculpture called Maman in its entrance courtyard, Archbishop Prendergast said. The idea was to make it seem as if Kumo was approaching Maman.

“Cathedral staff were shown other cathedrals and public buildings in Europe that had been involved,” the archbishop said. “It seemed innocent enough.

“I guess we thought people would see this as a sign the church is involved in Ottawa’s celebrations,” he said. “Many people, both Catholic and others, English and Francophone, remarked how pleased they were that Notre Dame was involved in our celebration of Canada 150.”