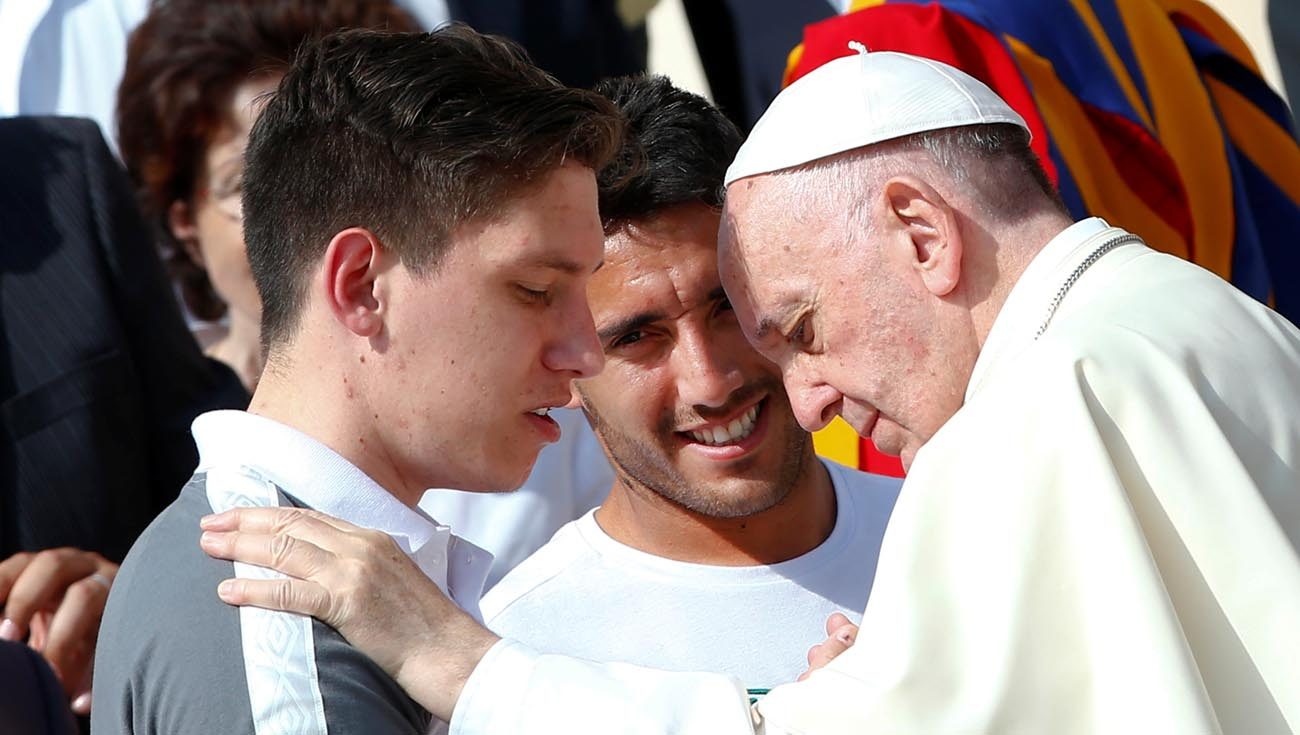 Pope Francis blesses Jackson Follmann of the Brazilian Chapecoense soccer team as the pontiff arrives for his weekly audience Aug. 30 in St. Peter's Square at the Vatican. The pope met with Follmann and two other soccer players, who survived a 2016 airplane crash that killed their teammates. (CNS photo/Tony Gentile, Reuters)

VATICAN CITY (CNS) — God wants people to live with hope and joy — not bitterness — and to dream with him of a better world, Pope Francis said.

“Please, make sure we do not pay attention to disappointed and unhappy people; let us not listen to those who cynically plead not to cultivate hope in life,” he said Aug. 30 during his weekly general audience.

People must ignore those who try to crush enthusiasm and smother “youthful euphoria,” he said. Instead, Christians must cultivate a “healthy utopia” based on what God wants for the world.

“God wants us to be able to dream like he does and, with him as we journey, to be quite attentive to reality — dreaming of a different world,” he said.

Continuing his series of audience talks on Christian hope, the pope reflected on a reading from the Gospel of St. John (1:35-43), which describes how the first disciples heard of Jesus and wished to follow him.

Jesus asked the first two men, “What are you looking for?” because he sensed a healthy restlessness in their young hearts, Pope Francis said.

In fact, the pope said, young people who are not seeking something or looking for meaning in life “are not young, they have gone into retirement, they have aged before their time. It’s sad to see young people in retirement.”

Throughout the Gospels, he said, Jesus responds to the people he meets along the way; he is like an “arsonist,” the pope said, setting people’s hearts ablaze.

The intense joy Jesus ignites in those he encounters is the wellspring of every vocation, the pope said, whether it be marriage, consecrated life or the priesthood.

In that first encounter, Jesus “gives us new joy and hope and leads us — even through trials and difficulties — to an ever-fuller encounter with him and fullness of joy.”

Jesus doesn’t want people who walk reluctantly behind him, the pope said. “Jesus wants people who have experienced that being with him gives immense joy that can be renewed each day in life.”

Any disciple who does not carry joy in his or her heart “does not evangelize in this world.”

People do not become preachers of God’s word by “sharpening the weapons of rhetoric,” the pope said. “You can talk and talk and talk,” but it will not make a difference if that bright light of joy is missing from one’s eyes.

At the end of the general audience, the pope met with three soccer players, who survived a devastating airplane crash in 2016 that killed all of their teammates.

The charter flight for the Brazil’s Chapecoense soccer team was headed from Bolivia to Colombia for the 2016 South American Cup finals. The crash, caused by an exhausted fuel supply, killed 71 of the 77 passengers, which included players, coaching staff, journalists and guests. Only three players and three others survived.

The pope blessed the surviving players, and he greeted and hugged family members of the deceased and the team’s current players. David Plinio de Nes, team president, told Vatican Radio that “Pope Francis has let us feel his love since the tragic moment of the plane accident” and has given them the strength to go on.

NEXT: In Chile, women in crisis turn to Catholic foundation for help