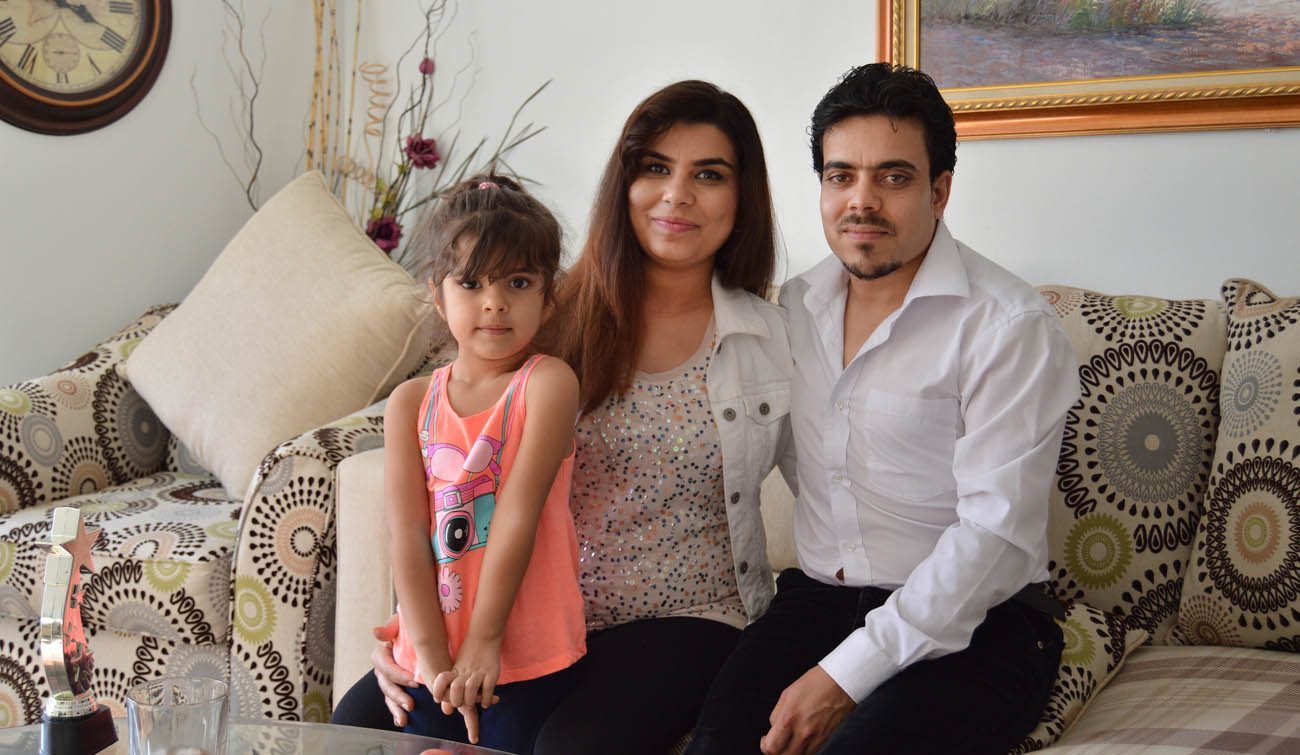 The Noorzei family, who immigrated to Charleston, W.Va., from Afghanistan in 2015, poses for a photo in late February. Pictured are 4 year-old Sana and her parents, Wahida Bakhtari, 29, and Omid Noorzei, 30. (CNS photo/Martina Hart, Catholic Spirit)

CHARLESTON, W.Va. (CNS) — The Noorzei family of Charleston waited three years for their visas to emigrate from Afghanistan and with some help from Catholic Charities in the Diocese of Wheeling-Charleston, they have settled into a new life.

“It was very dangerous for me because I worked for a couple of years for the United States government, and some unknown group is targeting the people who work for the company which is supported by the United States,” Omid Noorzei said. “I left my car, my house, everything, but at least I saved my life, and I’m very happy for that.”

Omid has a bachelor’s degree in business and had taken English courses before and during college. From 2008 to 2011, he was a field monitor with the U.S. Agency for International Development, working on agricultural development in Afghanistan.

He then became a team leader for another agency in Kabul, supported by the U.S. State Department, working on a project to establish a prisoner classification database for the Afghan corrections system.

His wife, Wahida, is originally from Mazar-i-Sharif. Both are of the Baha’i faith, a monotheistic religion that emphasizes the spiritual unity of all humankind. Being members of a religious minority in Afghanistan posed another challenge for the young couple.

After they got married, they settled in Kabul where it was difficult for Wahida to continue her studies to become a teacher, mainly because she could not attend classes without being accompanied by her husband or another male family member.

“A lot of people escape because of the bad situation,” Omid told The Catholic Spirit, newspaper of the Diocese of Wheeling-Charleston. “It’s become worse in the last two or three years. People escape any way they find a way, especially the people who work for the Germans, for the Italians, for the Canadians, for the United States.”

Upon receiving their visas, Omid contacted the International Organization for Migration to inform them of their plans to come to Charleston where his sister had been residing already for a few years. That organization gave him a contact number for Catholic Charities West Virginia and its Office of Migration and Refugee Services.

“They helped us a lot,” he recalled. “When we came here we didn’t know what to do. We were not familiar with the city.”

The Catholic Charities agency took them to local hospitals to receive necessary vaccinations and also helped them obtain health insurance through the state’s Department of Health and Human Resources. While Omid’s sister was instrumental in finding an apartment to rent, Catholic Charities’ “Welcome Money” helped to furnish it.

Soon after arriving in the U.S., the family also received permanent legal residency status, or green card, allowing them to live and work here on a permanent basis. “When I received my Social Security card, I started applying for jobs,” Omid said. “After a lot of difficulties, I got a job at Embassy Suites Hotel as a banquet worker.”

He is also a full-time student at Bridge Valley Community College where he is majoring in network engineering and cybersecurity. “Once I complete my degree, I can obtain a job that will allow me to support my family and become a contributing member of this country,” he said.

Wahida also works at the hotel, but cut down her hours to take care of their 4-year-old daughter, Sana.

Hart writes for The Catholic Spirit, newspaper of the Diocese of Wheeling-Charleston.

PREVIOUS: Rothers still rooted to land where martyred priest and siblings grew up

NEXT: For working priests, distance-learning evangelization degree is godsend