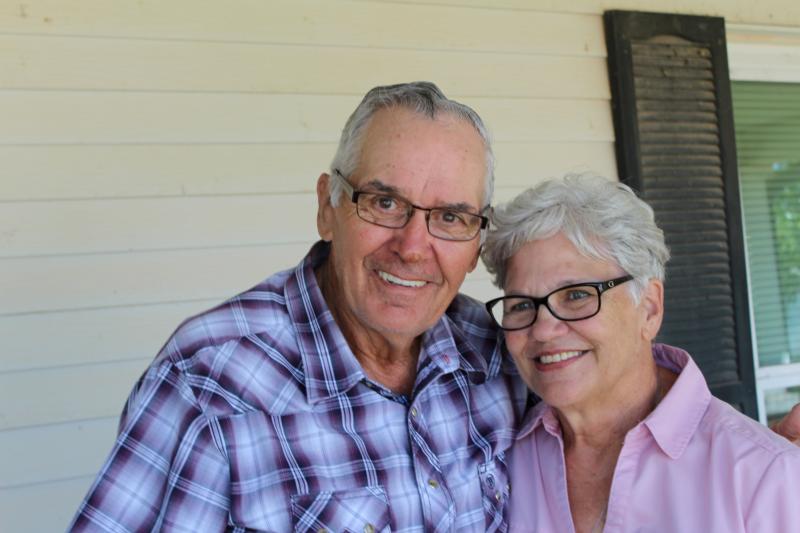 Tom and Marti Rother pose for a photo on their farm Aug. 29 in Okarche, Okla., where Tom grew up with his siblings. He is the brother of Father Stanley Rother, a priest of the Oklahoma City Archdiocese, who was murdered in 1981 in the Guatemalan village where he ministered. He will be beatified Sept. 23 in Oklahoma City. (CNS photo/Anamaria Scaperlanda Biddick)

OKARCHE, Okla. (CNS) — Tom Rother and his wife of 52 years, Marti, live on the farm where he grew up, less than an hour’s drive from their five children and 15 grandchildren.

Though the farm, located three miles from the center of Okarche, is now run by his oldest two sons, he still spends days in the gently sloping fields, cutting hay alongside them and raising calves. At first glance, his life seems exceptional mostly in its rootedness: He attends the same parish and farms the same land where he was raised.

He also is a brother to the first U.S.-born martyr, Father Stanley Rother, who will be beatified Sept. 23 in Oklahoma City. He was gunned down in 1981 in the Guatemalan village where he ministered.

Tom, like his older brother Stan and their other siblings, grew up surrounded by farming, family and faith.

They began their day with farm chores and breakfast. Then, as Tom remembered, “We’d come in on the school bus, put our things up, and go over to church where they had Mass every morning,” at Holy Trinity Catholic Church and School, still a thriving community in the Archdiocese of Oklahoma City, 30 miles northwest of the city.

After school, “we came home and had cows to milk and chores to do,” he said. After dinner, “especially during the month of Mary and in the winter time, we prayed the rosary,” Tom Rother recollected in an interview for Catholic News Service.

“I would try to sneak upstairs a little early,” he said with a shrug and a laugh. “But it didn’t work. They were good parents. They pushed it.”

In addition to a strict household order that centered on work and prayer, the Rother parents modeled patience and love, “I hardly ever heard a cross word,” between my parents, Tom said.

The parish priest, Father Edmund Von Elm, was a regular part of their family life, helping with the farm work and staying for dinner. “One of my dad’s best friends was the priest up here at Holy Trinity,” Tom said. “He loved to be around hay and cattle, ’cause he was a farm boy himself. I think that was one of the motivations for Stan and Sister to go to the religious life.”

Tom was 13 when Stan and Betty Mae, now Sister Marita, left. “I was surprised. It just didn’t happen very often,” he said. “I just remember when Sister told me she was going. We were out digging potatoes. She told me that day, that come a little later in the summer, she was going to Wichita to be a nun. I couldn’t believe it.”

Betty Mae left a few weeks before Stan — leaving Tom and their brother Jim to take over many of the farm chores. “We lost all of our help!” Tom laughed. “They just doubled up on us, and worked a little harder too.”

Sister Marita is a member of the Adorers of the Blood of Christ and lives in Wichita, Kansas.

A few years after his ordination, when Father Rother volunteered for the mission in Guatemala, Tom wasn’t surprised. “He was just a little different,” he said.

“It takes a special person,” he said, especially in a time when many men were leaving the priesthood altogether. In Father Stan’s class alone, five of the 11 men ordained left within seven years. “It was really sad when these priests just started dropping out. We had three at Okarche quit.”

His brother persisted, following the model of a parish priest that Father Von Elm set for him. He worked and broke bread alongside his parishioners. He was dedicated to them even when he was in danger. “He was home just before [he was killed] and you could just see it in him, he wanted to go back so bad to be with those people,” he said, recalling when he heard the news of his brother’s death.

“We were in Tennessee, that was our only vacation. When they told me that the phone was for me, I says, well, I can tell you what happened. And, so, we took off in the middle of the night, and drove,” he remembered. “Next morning, Paul Harvey come on and said that there’s been a Catholic priest from Okarche, Oklahoma, who was murdered in Guatemala. Now, that would have been our first news, if Dad wouldn’t have got ahold of us.”

After Stan died, it didn’t occur to him that perhaps his brother was a saint. “That’s a thing for back in the 16th century, not to come to a little old farmstead like this, you know,” he said.

Since then, he has heard of his brother’s intercession in four situations and witnessed it in one, though it is unlikely any are up to the Vatican standards for a miracle. His wife got knocked down by a cow, hit her head, and was in danger of being trampled by the 50 cows in the lot.

“I said, Stan buddy, if you ever help me, buddy, help me now,” he said, recalling his fear at how the cows were moving around. Miraculously, “some of them went into the barn and stayed.”

Pointing, Tom said, “the other ones stayed over in this corner, and there we were, and I was there with her, and them cows could have run right over us. But they just instantly calmed down. So, I just figured that was my miracle.”

NEXT: Afghan family gets new start in West Virginia with Catholic agency’s help