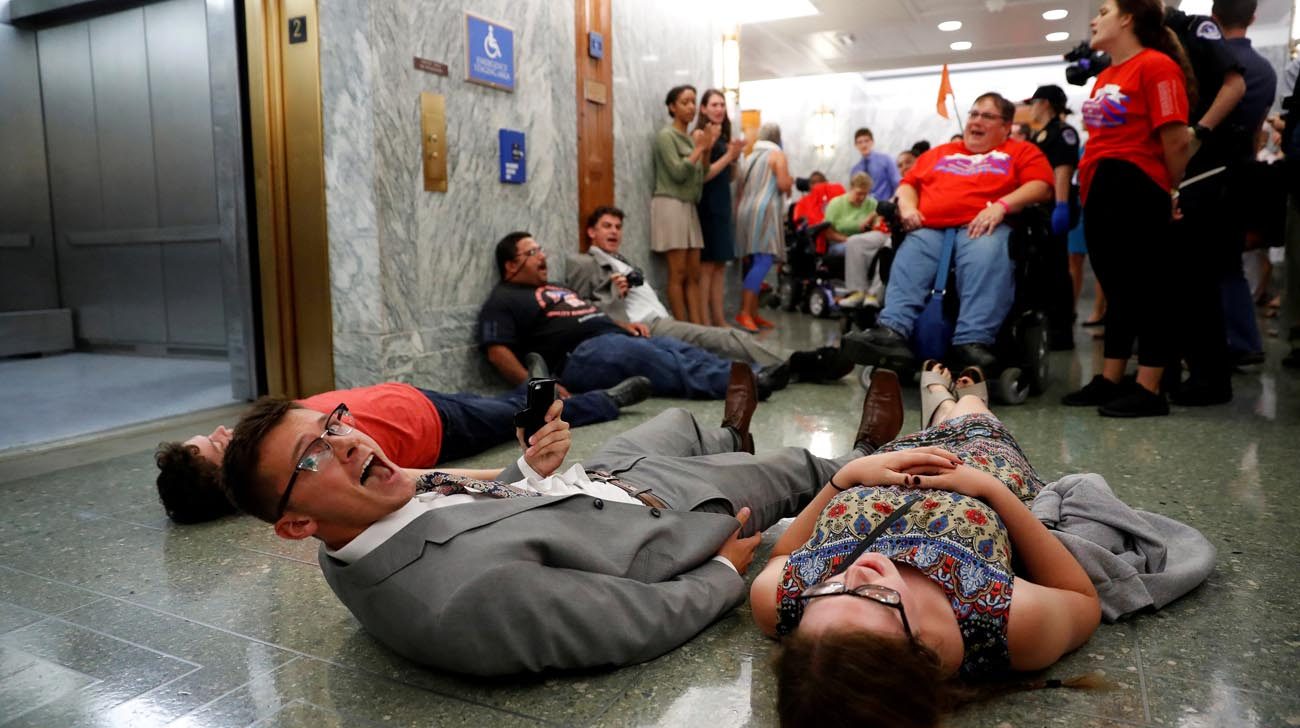 Demonstrators lie on the floor in protest Sept. 25 as the Senate Finance Committee holds a hearing on the latest Republican effort to repeal and replace the Affordable Care Act on Capitol Hill in Washington. (CNS photo/Aaron P. Bernstein, Reuters)

UPDATED – WASHINGTON (CNS) — The U.S. bishops’ effort urging senators to protect the poor and amend the Graham-Cassidy bill, meant to replace the Affordable Care Act, became a moot point as opposition to the bill stiffened amid frantic rewriting to get critical senators’ votes and ultimately led to a decision to have no vote on it.

By mid-afternoon Sept. 26, Senate Majority Leader Mitch McConnell, R-Kentucky, said the measure would not be put to a vote.

Republican Sens. John McCain of Arizona, Rand Paul of Kentucky and Susan Collins of Maine said they would not vote for the bill, which doomed the legislation. The bill, which was being considered under budget reconciliation rules, needed only a simple majority to pass. But in addition to the 48 members of the Democratic caucus lines up against it, the three GOP defections made passage unlikely before the Sept. 30 deadline.

“We urge you to think of the harm that will be caused to poor and vulnerable people and amend the legislation while retaining its positive features,” the bishops said in a letter to all senators dated Sept. 22.

“Without significant improvement, this bill does not meet the moral criteria for health care reform outlined in our previous letters and must be changed,” the bishops said. That criteria includes respect for life and dignity; honoring conscience rights; access for all; and a high-quality plan that is affordable and comprehensive.

The bishops criticized the measure’s Medicaid “per capita cap” because it puts an “insufferable burden” on poor and vulnerable Americans. They did praise the bill for correcting “a serious flaw” in the ACA by ensuring “no federal funds are used for abortion or go to plans that cover it.” They had called on senators to amend the bill to address its flaws but retain the pro-life provisions.

The Graham-Cassidy bill would have repealed the ACA and replace it with block grants for the states to spend as they see fit. The block grants’ size, though, would shrink over time and disappear altogether in 2027.

The bishops did praise the proposal for correcting “a serious flaw” in the ACA by making sure “no federal funds are used for abortion or go to plans that cover it.” “We also applaud that Graham-Cassidy redirects funds from organizations that provide abortion,” they said.

The bishops’ objections to the bill were voiced by 3,000 religious leaders who signed a letter from the Interfaith Healthcare Coalition opposing the bill.

“As faith leaders, it is our duty to care for and minister to people in our communities. As senators, you have a similar duty to care for your constituents,” said the letter, issued Sept. 25. “Please focus on bipartisanship rather than political posturing, oppose Graham-Cassidy, and extend CHIP and DSH funding.”

CHIP is the Children’s Health Insurance Program, which is administered by the Department of Health and Human Services and provides matching funds to states for health insurance to families with children who have incomes that are modest but too high to allow them to qualify for Medicaid. DSH is the Disproportionate Share Hospitals Program, which allows hospitals to get at least partial compensation for treating indigent patients.

Allowing those programs to lapse, the letter said, would “allow the health of America’s most vulnerable people to face unnecessary and immoral obstacles.”

The bishops, in their letter, said the bill’s provisions to ensure no federal funds would be used for abortion “or go to plans that cover it” was “praiseworthy,” because they would “finally address grave moral problems in our current health care system.”

But they took the bill to task for giving block grants to states “in place of premium tax credits, cost-sharing subsidies and the Medicaid expansion,” saying that arrangement would only harm the poor.

Contributing to this story was Mark Pattison.