Blessed Rother a ‘torch of hope’ for church and world, says cardinal

Clergymen concelebrate Mass during the beatification Mass for Father Stanley Rother Sept. 23 at Oklahoma City's Cox Convention Center. Blessed Rother, a priest of the Oklahoma City Archdiocese, was murdered in 1981 in the Guatemalan village where he ministered. (CNS photo/Dave Crenshaw, Eastern Oklahoma Catholic)

OKLAHOMA CITY (CNS) — If the martyrdom of Blessed Stanley Francis Rother “fills us with sadness,” it also “gives us the joy of admiring the kindness, generosity and courage of a great man of faith,” Cardinal Angelo Amato, prefect of the Congregation for Saints’ Causes, said Sept. 23 in Oklahoma City.

The 13 years Blessed Rother spent as a missionary in Guatemala “will always be remembered as the glorious epic of a martyr of Christ, an authentic lighted torch of hope for the church and the world,” the cardinal said in his homily during the U.S. priest’s beatification Mass.

“Formed in the school of the Gospel, he saw even his enemies as fellow human beings. He did not hate, but loved. He did not destroy, but built up,” Cardinal Amato said.

“This is the invitation that Blessed Stanley Francis Rother extends to us today. To be like him as witnesses and missionaries of the Gospel. Society needs these sowers of goodness,” he said. “Thank you, Father Rother! Bless us from heaven!”

The cardinal was the main celebrant of the beatification Mass, joined by Archbishop Paul S. Coakley of Oklahoma City and his predecessor, retired Archbishop Eusebius J. Beltran, who formally opened the Rother sainthood cause 10 years ago.

An overflow crowd of 20,000 packed the Cox Convention Center in Oklahoma City for the beatification of Father Rother, murdered in 1981 as he served the faithful at a mission in Guatemala sponsored by the Archdiocese of Oklahoma City. The evening before a prayer service was held at St. Benedict Parish in Broken Arrow.

In Rome, Pope Francis said Sept. 24: “May his heroic example help us be courageous witnesses of the Gospel, dedicating ourselves in supporting human dignity.” After praying the Angelus with visitors gathered in St. Peter’s Square, the pope recalled the “missionary priest, killed out of hatred for the faith, for his work in evangelization and the human advancement of the poorest in Guatemala.” 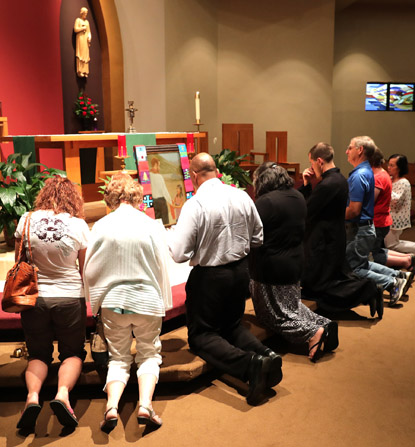 People kneel in prayer in front of the altar and image of Father Stanley Rother following a vespers and vigil Sept. 22 at St. Benedict Parish in Broken Arrow, Okla. Father Rother, a priest of the Oklahoma City Archdiocese who was murdered in 1981 in the Guatemalan village where he ministered, was beautified the next day in Oklahoma City. (CNS photo/Dave Crenshaw, Eastern Oklahoma Catholic)

In Oklahoma City, before the Sept. 23 Mass began, the congregation was shown a documentary made about his life and ministry titled “The Shepherd Cannot Run: Father Rother’s Story.”

Then Cardinal Amato, Archbishop Coakley, Archbishop Beltran and about 50 other U.S. bishops, over 200 priests and about 200 deacons processed in for the start of the beatification ceremony.

Archbishop Coakley welcomed Catholics “from near and far” who traveled to Oklahoma “to celebrate the life and witness of Father Rother.” He acknowledged the ecumenical, interfaith and civic leaders in attendance and those joining the celebration by watching live coverage of it on the internet, TV and radio.

Before Cardinal Amato read the apostolic letter declaring Father Rother “Blessed,” Archbishop Beltran gave some remarks, saying that little did Father Rother know that his growing-up years on his family’s farm near Okarche “would mold him into the kind of man who would make great strides when he volunteered to go to Guatemala.”

“He struggled in seminary,” the archbishop remarked, referring to the difficulty the priest had with learning Latin. He was nearly expelled because he had such a hard time, but he went on to be ordained for the Archdiocese of Oklahoma City in 1963. Once in Guatemala to serve in Santiago Atitlan, he learned Tz’utujil, the language of the many Mayan descendants who were his parishioners. He helped translate the Bible into Tz’utujil.

He worked side by side with the people “teaching them many of the agricultural practices he learned in Okarche,” Archbishop Beltran said.

The mission was about 10 years old when Father Rother arrived in 1968 and had a staff of 10, but the number of missionaries dwindled as Guatemala’s civil war, which began in 1960 and lasted until 1996, intensified. Eventually, Father Rother’s name appeared on a death list and he returned home.

“His ways were very quiet and unassuming but eventually he began to receive death threats,” the archbishop continued. “He made infrequent visits (back to Oklahoma). On his last visit (in 1981) he felt the need to return to his people no matter what the consequences.”

Friends recalled him saying, “The shepherd cannot run. I want to be with my people.” Within three days of his return, three men entered his rectory in the dead of night and murdered him.

“His saintly life has become well known beyond boundaries of Oklahoma and Guatemala and the faith of those familiar with his life has been greatly strengthened. How grateful we are to almighty God this day for the beatification of Father Rother,” Archbishop Beltran said.

Cardinal Amato followed the archbishop by reading the formal letter about the priest’s beatification. When he concluded, a huge colorful banner was unfurled above the altar with a likeness of Blessed Rother and an image of his Guatemalan mission and the Oklahoma City archdiocesan coat of arms at the bottom.

His feast day will be celebrated July 28, the day when he was fatally shot in the head by masked men.

Relics of Blessed Rother, including a piece from one of his rib bones, were brought to the altar in a golden reliquary and set on a small table to the left of the main altar. Cardinal Amato venerated the relics and censed the reliquary.

Rother family members then came up to the altar to greet the cardinal: his sister, Sister Marita Rother, a member of the Adorers of the Blood of Christ, who lives at her community’s motherhouse in Wichita, Kansas; and his brother Tom and his wife, Marti, who live on the farm where the martyred priest and his siblings grew up, located three miles from the center of Okarche.

In his remarks, Archbishop Coakley said that on behalf of the local church in Oklahoma “and in communion with my brother bishops in the United States and Guatemala,” he felt “profound gratitude” for the opportunity to help celebrate the beatification of a native son.

“We are grateful for your (Pope Francis) recognition of the heroic witness of this good shepherd (who) remained with his people,” the archbishop said. “He gave his life in solidarity with so many suffering individuals and family who endured persecution for the sake of the Gospel. We pray the church will experience a new Pentecost and an abundance of vocations to the priesthood inspired by the witness and aided by the intercession of Blessed Stanley Rother.”

He thanked Archbishop Beltran for formally opening the Rother cause, as well as the postulator, Andrea Ambrosi of Rome, who attended the Mass, and the many men and women who worked diligently over many years to advance the cause and “make known the holiness and heroism of this ordinary priest.” 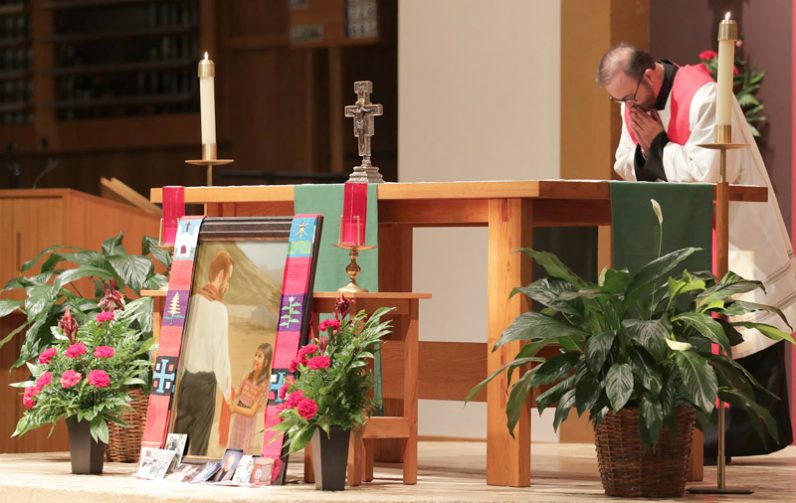 NEXT: Show all the warts of Christ’s church, Cardinal Dolan tells priests