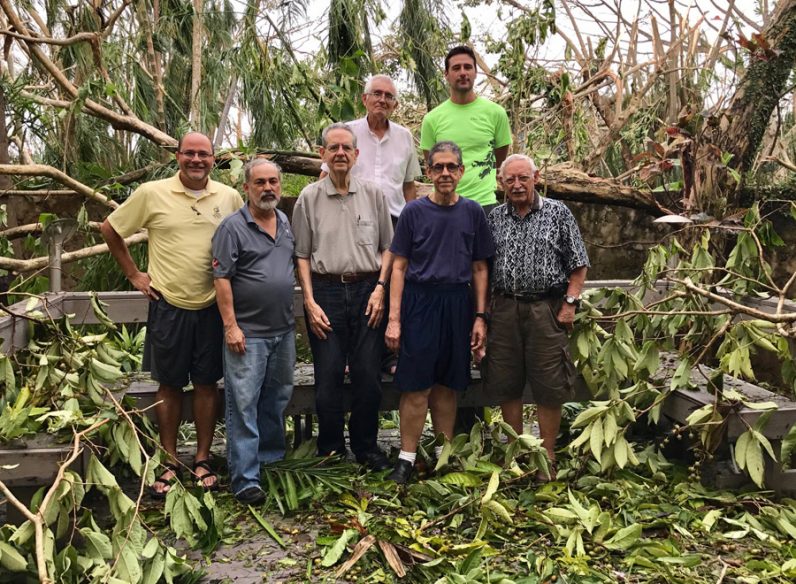 Members of the Society of Jesus in San Juan, Puerto Rico, are pictured near debris left by Hurricane Maria after the Sept. 20 storm. The deadly hurricane plowed into Puerto Rico with winds up to 155-miles-per-hour. (CNS photo/courtesy Jesuit Father Flavio Bravo)

WASHINGTON (CNS) — It took a couple of days for Jesuit Father Flavio Bravo to venture out and survey the devastation of Hurricane Maria, with its torrential rain and winds of 155 miles per hour, inflicted for hours on the island of Puerto Rico.

“We were trapped,” because of debris, said Father Bravo, the superior of the Society of Jesus’ Puerto Rico community, recounting the initial aftermath of the hurricane on the island. When Father Bravo finally managed to get outside, the scene was nothing short of “apocalyptic,” he said during a Sept. 22 telephone interview with Catholic News Service.

In what was once a lush forest, the palm trees that are still standing look more like telephone poles because they have no leaves on them. Before Maria, it was hard to see anything past the dense tropical foliage, and now “you can see all along.” Seeing the fallen trees, “it is brutal,” Father Bravo said.

But what was most shocking, said Father Bravo, was the sight of the cross at the entrance of Colegio San Ignacio de Loyola, the secondary school the Jesuits operate on the island: The 6-foot-5-inch cross was bent into a 45-degree angle by the hurricane’s forceful winds and now looks almost like a sword planted on the cement post.

“It was a sight that touched me. But that cross invites me to think: What have I done for Christ? What am I doing for Christ? What ought I do for Christ?” Father Bravo said, citing part of the Jesuits’ Spiritual Exercises. “It was a message of destruction but also of reconstruction.” 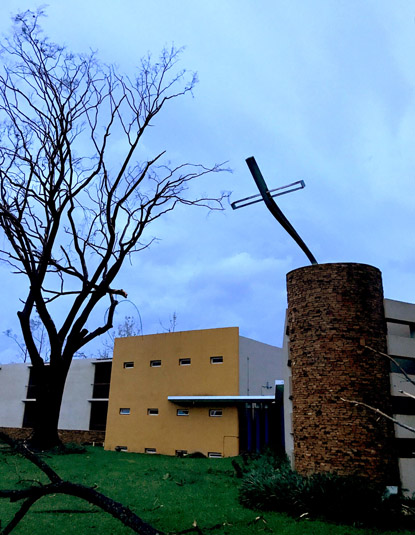 Puerto Rico, as well as other places affected by September’s back-to-back hurricanes, first Irma and now Maria, has a long way to go before life returns to normal.

Father Bravo said the aftermath has left a pile of emotions and thoughts almost as high as the debris: sadness, desperation from lack of communication, the poor who already were suffering will now suffer more, wanting to help but not knowing where to begin. It feels daunting, he said.

Those who have been able to free themselves from damaged buildings and homes are out looking for neighbors, family, making sure everyone is OK.

“There isn’t a sense of panic, but (rather) sadness. … You don’t know how to console, or be consoled” because there’s so much destruction all around, he said.

Puerto Rico, which already was experiencing economic problems because of huge debt due to mismanagement, had an infrastructure with massive problems before the hurricanes arrived. The economy already was weak, people were leaving the island behind and with it, family, because of the financial problems. And now those who had little, have nothing, Father Bravo said.

“It’s an avalanche of disasters, one disaster after another disaster,” he said.

One of Father Bravo’s tasks is to repair the damage done to the Jesuit school, which educates more than 600 in San Juan, and which already had suffered damage from Hurricane Irma. Electricity will not return for a long time, he said, maybe four to six months. There is a lot of broken glass, damages to buildings, and debris to clear.

Even in the midst of tragedy, “we are seeking the greater glory of God,” said Father Bravo. The Society of Jesus in Puerto Rico wants to offer its thanks for the help and support it will take to raise, in the middle of an aftermath, a path of hope to face the future ahead.

The website for the Jesuit’s province lists a link for donations at jesuitscentralsouthern.org to help with recovery efforts.

PREVIOUS: After repeated pinnings, Senate goes to the mat again on ACA repeal

NEXT: Blessed Rother a ‘torch of hope’ for church and world, says cardinal