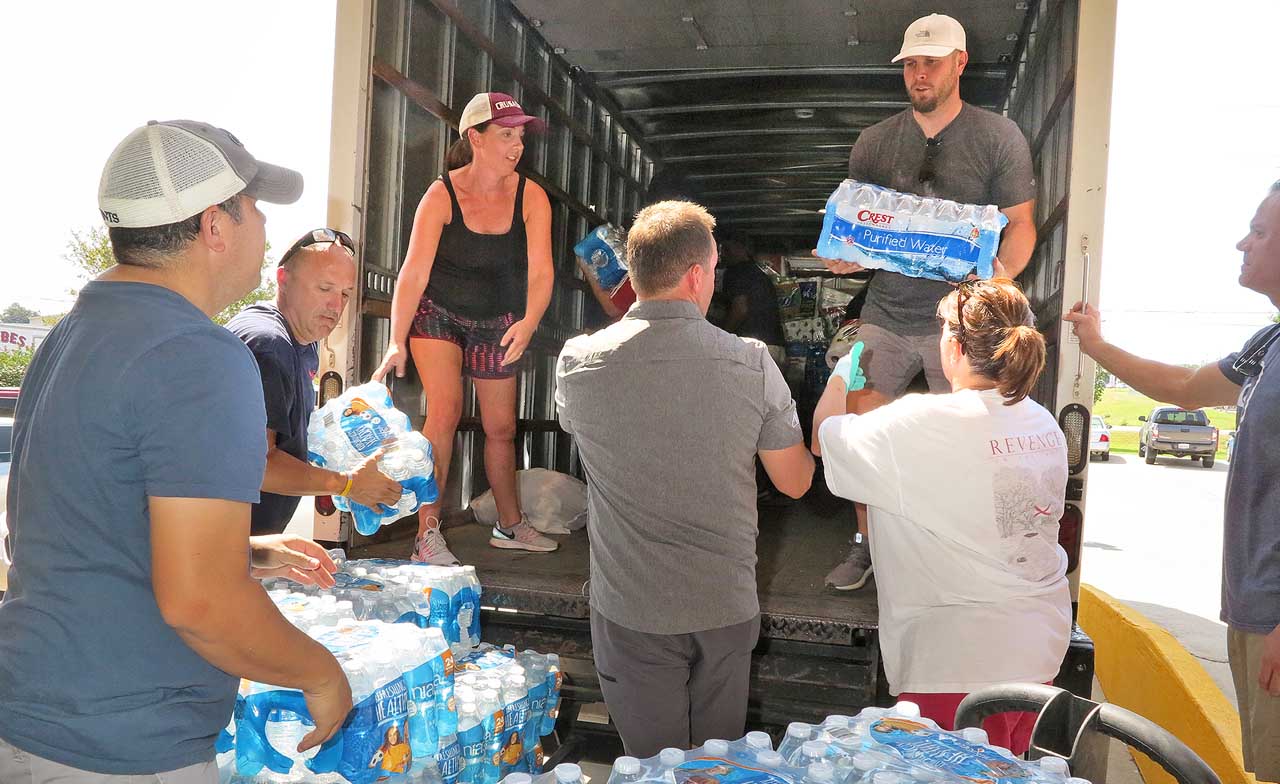 BEAUMONT, Texas (CNS) — Hope. That’s what 50-plus volunteers from a Louisiana Catholic parish offered to those devastated by Hurricane Harvey as part of a pre-dawn caravan of six 18-wheelers with donated supplies to Texas Sept. 9.

“We are so glad to see you,” a Beaumont resident told the group from St. Catherine of Siena Parish as they arrived at the first Texas stop. “God bless you.”

The stop was a warehouse run by Catholic Charities of Greater Beaumont that served as a storage and distribution site for food, water, hygiene and cleaning supplies, baby food, diapers and more for parishes and people in need.

The caravan left St. Catherine of Siena in Metairie, Louisiana, at 4:30 a.m., and the bus of volunteers arrived back home at midnight. In Beaumont, the first stop, volunteers first unloaded 18-wheelers already on site before unloading three of their own that had been part of the six-hour convoy from Metairie.

Catholic Charities staff and volunteers greeted the Metairie travelers with thanks and a prayer offered by Bishop Curtis J. Guillory, head of the Beaumont Diocese since 2000. A native of Mallet, Louisiana, he served in the Archdiocese of New Orleans from 1974 to 1988.

He said the greatest signs after a disaster are the individuals rushing to aid others, no matter their race or belief.

“With you people here, it is a sign of hope,” Bishop Guillory said. “It gives us encouragement. We realize we are not in this alone.”

The Diocese of Beaumont’s devastation was comparable to Hurricane Rita’s damage in 2005 and Ike’s in 2008, Bishop Guillory said. This time, relentless rain badly damaged 12 of 50 churches in the diocese, three schools and sent 8 feet of water into Holy Family Retreat Center.

Recovery continues in southern Texas after Hurricane Harvey wreaked havoc on the region Aug. 25-30. In a four-day period, many areas received more than 40 inches of rain. Flooding inundated hundreds of thousands of homes, displaced more than 30,000 people, and prompted more than 17,000 rescues. At least 70 people died.

At St. Ann School in Orange, Texas, all staff members except the principal had water in their homes, and there was no running water for three days, with a boil advisory remaining two weeks later due to pumps flooding.

“That’s what we are facing here,” Bishop Guillory said. “But through it all, you see the goodness of people. God speaks through storms, and through the people.”

Carol Fernandez, executive director and president of Catholic Charities Southeast Texas, concurred with Bishop Guillory. Fernandez was living in New Orleans in 2005 and lost her home in Katrina.

“I can’t say thank you enough,” Fernandez said. “It is so awesome bringing love from my hometown and all over the nation. Volunteers are providing help and creating hope. This is what it is we do (as Catholics) – helping people but at the same time reminding people that they are loved and not forgotten.”

She estimated that her agency would be distributing needed items for four to six weeks.

From Beaumont, three of the 18-wheelers continued west to a Knights of Columbus council and St. Vincent de Paul distribution center and thrift store on the east side of Houston.

Knights from the Archdiocese Galveston-Houston opened Council 3077 headquarters to be used as a drive-through for individuals needing supplies and food donated by the Houston Food Bank and other generous individuals.

“We are their family and have relationships with them,” she told a reporter from the Clarion Herald, newspaper of the New Orleans Archdiocese. “We are a regular source of food for many people.”

Pallets of rice, tissue paper, paper towels, food, clothing, etc., were pulled from the trucks, and Deajon said some remained at the location to stock its food pantry and thrift store “where people can come and get what they need.”

“This is taking the recovery center and putting it in a community that has been severely impacted,” she said. Deajon noted that more than 61 Catholic sites, primarily church parishes, reported varying degrees of damage. Six sites — including four churches whose sanctuaries were underwater, the Christian Renewal Retreat Center and diocesan Cemeteries Office — reported catastrophic damage. A Knights council in Dickinson was destroyed.

St. Catherine volunteers saw their effort as a repayment of kindnesses Texas bestowed on Louisianians during Katrina. The parish also had sent supplies to Baton Rouge in 2016.

“We saw who it was helping and how it affected people, and we wanted to do this as a family (his wife and daughter accompanied him) and a parish community,” said Wayne Francingues, past Men’s Club co-president. “I think we all saw how desperate our area was for Katrina, and Houston helped us and Baton Rouge helped us, so it was easy to give back. We understand that desperation you feel and know little things like we did in Texas can help.”

Father Tim Hedrick, parochial vicar of St. Catherine of Siena, was proud to be part of such a generous parish that recognized a need and worked hard to fill it. St. Pius X Parish and Archbishop Chapelle High School also donated supplies to the relief effort.

“And something even greater was that we showed them the love of Christ and gave them hope during their difficult time,” he said. “Our motto (at St. Catherine of Siena) is ‘Centered on Christ and Ablaze With Love.’ This really shows that we as a community are trying to live that out at St. Catherine.”

The priest quoted St. Catherine of Siena, the parish’s patron saint, “Be who God created you to be, and you will set the world on fire. As Christians, we are called to be the hands and feet of Christ and that’s who we were today.”