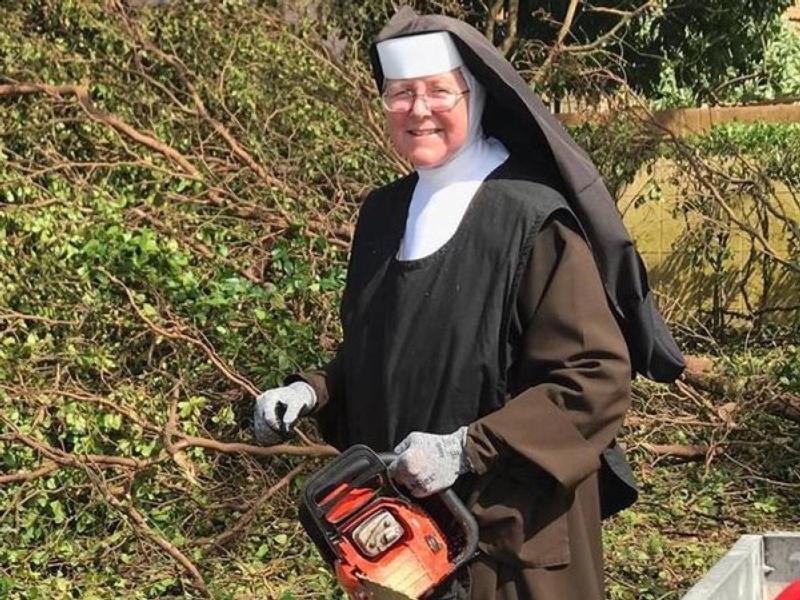 WASHINGTON (CNS) — She inspired many when she rolled up the sleeves of her habit to clean up after Hurricane Irma with a chainsaw.

After the local police department posted a video Sept. 12 on Twitter of Carmelite Sister Margaret Ann Laechelin trimming branches off a fallen tree with a chainsaw, she became an instant hit and a symbol of sorts for the hurricane-ravaged Miami area.

“People are making a big deal about the chainsaw, but I’ve already given my life to God and that’s what brings true joy,” not the fame that came after the airing of the video, said Sister Laechelin in a Sept. 14 phone interview with Catholic News Service.

But the community at Archbishop Coleman F. Carroll High School, where she is the principal, has been enjoying the fame and the attention it has brought to the suburban Miami Catholic school of 300 students in West Kendall, she said.

“They say ‘Sister, you’re famous. Can I have your autograph?'” she said.

The community needs every bit of levity it can find as it recovers from the damage wrought by Hurricane Irma, which led to the school’s closing because a cooling tower needs to be fixed before students are allowed to return. Inspired by the Carmelite’s example of contributing to the cleanup, families from the school have shown up to help clean around the perimeter, she said.

Though it’s not open for classes, the school has been helping the surrounding community, giving out ice (from its icemaker) and providing a place for others to charge their phones and regroup, Sister Laechelin said.

“There’s such joy in giving,” she said.

And that’s what she was doing when she decided to clear the tree from the road when a police officer, armed with a phone, happened to drive by and filmed her. Though you wouldn’t know it from the video, she had never really used a chainsaw before, but when she was faced with finding a way to clear the tree, she remembered some important advice from her students.

“I had to go on YouTube” to figure it out, she said, “but growing up in Texas, I did a lot of yardwork and my dad taught me to figure things out.”

Though she lives in Florida, she is a member of the Carmelite Sisters of the Most Sacred Heart in Los Angeles, who also have a community of four women religious in Florida. Via FaceTime, she has been talking to them, easing the concerns of her community in Los Angeles, she said.

“Sisters, we stick together,” she told CNS.

They weren’t surprised at all. she said, by seeing her wielding the chainsaw and said,”That’s Sister Margaret Ann, she never sits back and jumps right in.”

Her family in Texas, however, was in “awe” when they saw her on TV, she said, and told her “I always thought you’d be famous, but not because of a chainsaw.”

The best lesson she can impart on her students from the situation, she said, comes from the Gospel.

“I want them to know that if they see a need, to step in and to help people, to help others, because God didn’t create us to be selfish and to care only for our little world,” she said.

NEXT: Wuerl: Pope sees ‘journeying together’ as essential to life of church