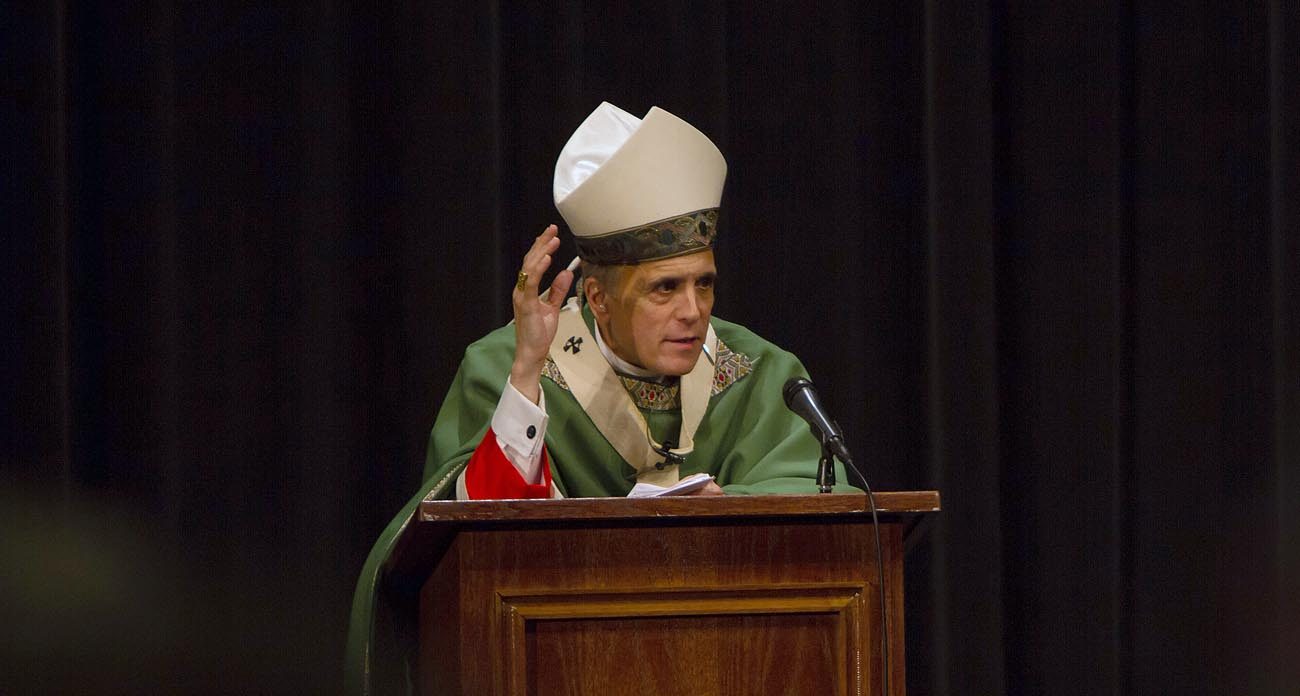 Cardinal Daniel N. DiNardo of Galveston-Houston gives a homily during a Sept. 2 Mass at St. Ignatius Catholic Church in Spring, Texas, for victims of Tropical Storm Harvey. Cardinal DiNardo, president of the U.S. Conference of Catholic Bishops, has asked the nation's bishops to take up an emergency collection in their dioceses for those impacted by Hurricane Irma. (CNS photo/James Ramos, Texas Catholic Herald)

WASHINGTON (CNS) — The president of the U.S. Conference of Catholic Bishops in Washington has asked his fellow bishops around the country to take up an emergency collection in their dioceses during weekend Masses Sept. 23-24 to help those recovering from devastation wrought by Hurricane Irma in the Caribbean and the southeastern region of the United States.

“While emergency outreach was immediate, we know that the road to recovery and the rebuilding of communities will be long and additional support will be needed,” said Cardinal Daniel N. DiNardo of Galveston-Houston in a statement issued late Sept. 14.

The funds collected “will be used in the affected areas to support humanitarian aid, assistance with long-term efforts to restore communities after widespread destruction, and for the pastoral and reconstruction needs of the church in U.S. and the Caribbean,” he said.

Cardinal DiNardo acknowledged that his call “comes on the heels” of the emergency collection for victims of Hurricane Harvey, which hit Texas and Louisiana and held on for days before moving inland.

Harvey, too, “caused catastrophic damage and compelled us to respond,” he said. “Likewise, Hurricane Irma has been devastating and our brothers and sisters in the Caribbean, especially the Diocese of St. Thomas in the Virgin Islands, and the southern U.S. need our help.”

The earlier call for a collection came in an Aug. 28 letter from Archbishop Jose H. Gomez of Los Angeles, as USCCB vice president, suggesting funds be collected during Masses the weekend of Sept. 2-3 or Sept. 9-10.

Hardly any place in the path of Hurricane Irma was left untouched. Its strength and size, with 120-plus-mph winds stretching 70 miles from its core, leveled entire islands in the eastern Caribbean, brought unprecedented flooding on Cuba’s north coast, devastated the Florida Keys, snapped construction cranes in downtown Miami and targeted cities along Florida’s Gulf Coast.

In the Keys alone, at least 25 percent of the homes were destroyed and 65 percent suffered significant damage, according to Federal Emergency Management Agency administrator Brock Long. “Basically, every house in the Keys was impacted,” he told the news media.

In a Sept. 12 statement, the U.S. bishops’ Executive Committee prayed for “the safety and care of human life” after two catastrophic hurricanes — Irma and Harvey — and they urged Catholics around the country to offer their prayers as well as financial support and volunteer help as they can.

Irma dwindled to a tropical storm as it neared the Florida-Georgia line early Sept. 11 and had died out over southern states by week’s end.

“The church is a channel for grace and solidarity in the wake of natural disasters as it offers solace and support in their aftermath,” Cardinal DiNardo said Sept. 14. “However, as is so often the case, the church itself in these regions is both a long-standing provider of aid and now is in need of tremendous assistance itself.”

Many church structures “have been damaged and their resources depleted which makes it even more challenging to provide assistance and pastoral outreach to those in need,” he added.

NEXT: Catholic college leaders reach out to DACA students in uncertain times