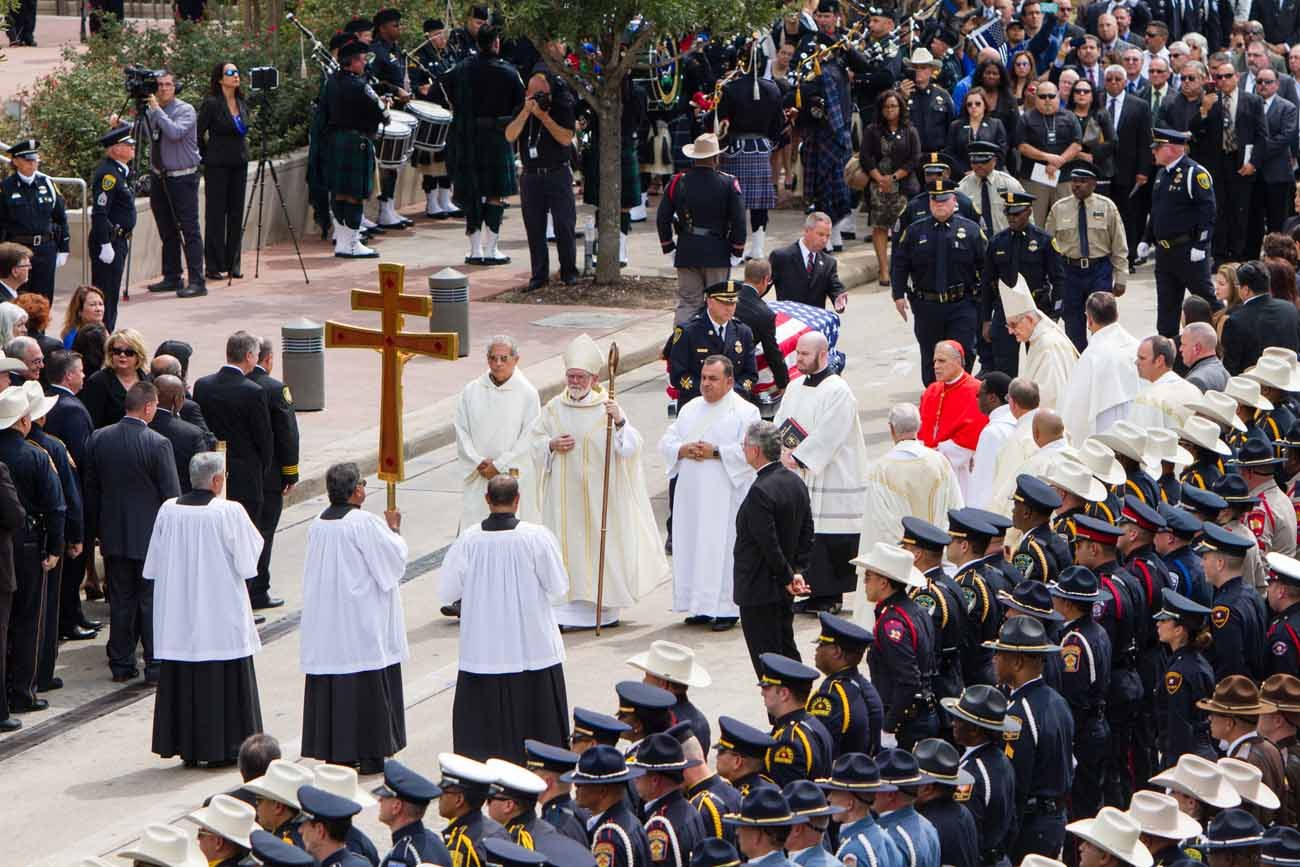 Cardinal Daniel N. DiNardo of Galveston-Houston, in red, retired Archbishop Joseph A. Fiorenza of Galveston- Houston, at far right, and Auxiliary Bishop George A. Sheltz of Galveston-Houston, center with crosier, process during the funeral Mass for Houston Police Sgt. Steve Perez outside the Co-Cathedral of the Sacred Heart in Houston Sept. 13. Perez died during Hurricane Harvey after driving into floodwaters while trying to get to work. (CNS photo/James Ramos, Texas Catholic Herald)

HOUSTON (CNS) — The Co-Cathedral of the Sacred Heart was filled with thousands gathered Sept. 13 to honor the life and pray for the soul of Sgt. Steve A. Perez, a veteran Houston police officer.

Perez, an active parishioner of St. Mary Magdalene Catholic Church in northwest Houston, died after driving into high water during Hurricane Harvey. The 35-year veteran officer was trying to find his way to work as Harvey’s record rainfall flooded hundreds of streets in the fourth largest city in the nation. 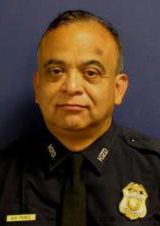 Cardinal Daniel N. DiNardo of Galveston-Houston said Perez lived with an open, human heart receptive to the Lord, a heart that he gave to the whole church.

“In the recent weeks, the city of Houston and Texas have given an object lesson in the beatitudes to the whole world,” Cardinal DiNardo said. “Part of the reason for that has to do with people like Sgt. Steve who always lived those beatitudes.

“We are surrounded by beauty,” he said.

Auxiliary Bishop George A. Sheltz of Galveston-Houston presided over the funeral Mass, joined by concelebrants Cardinal DiNardo and retired Archbishop Joseph A. Fiorenza of Galveston-Houston. Texas Gov. Greg Abbott and Texas Lt. Gov. Dan Patrick attended, with Houston Mayor Sylvester Turner, to pay their respects to the fallen officer and his family.

The funeral Mass was broadcasted to allow as many people to observe and participate in the liturgy. Dozens of emotional mourners listened nearby, many bearing flags, pins and ribbons, sharing hugs and wiping tears. Groups of uniformed officers from Dallas to Detroit stood watch on horse, bike and foot. Even nearby construction workers paused to pray during parts of the Mass.

Father Anthony Udoh, parochial vicar at Perez’s St. Mary Magdalene Catholic Church and homilist for the funeral Mass, said that Perez had seriously discerned the priesthood, but “decided to serve God and his people in a different uniform.

“We thank God for such selfless love and loyalty to service,” Father Udoh said.

“We pray today that our presence here and our prayers for your family, our love and concern may bring you some peace and consolation,” Father Udoh said to Perez’s family.

After Mass, the service moved to the street outside the co-cathedral, where Perez’s body was escorted by other officers and his son Maverick Perez.

After traditional salutes to law enforcement service, including a four helicopter flyby, a piercing three-volley salute, a riderless horse and final radio call, the co-cathedral’s processional cross with Bishop Sheltz led the casket’s escorts forward to Perez’s hearse. Then, the co-cathedral’s bells tolled as his casket was placed in the hearse, where it would follow a large motorcade of police vehicles to his final resting place at Houston National Cemetery.

Born in California, Perez, 60, attended Catholic schools in Central Texas before joining the Army in 1978. After serving in the Army, he became a member of the Houston Police Department in 1982

A rosary and liturgy was held at his parish church, St. Mary Magadalene, Sept. 12. Perez was the 114th Houston Police officer to die in the line of duty.

Just two weeks after Perez died, two first responders were killed in a car accident as Hurricane Irma rocked Florida Sept. 10. Together, the storms have claimed at least 150 lives.