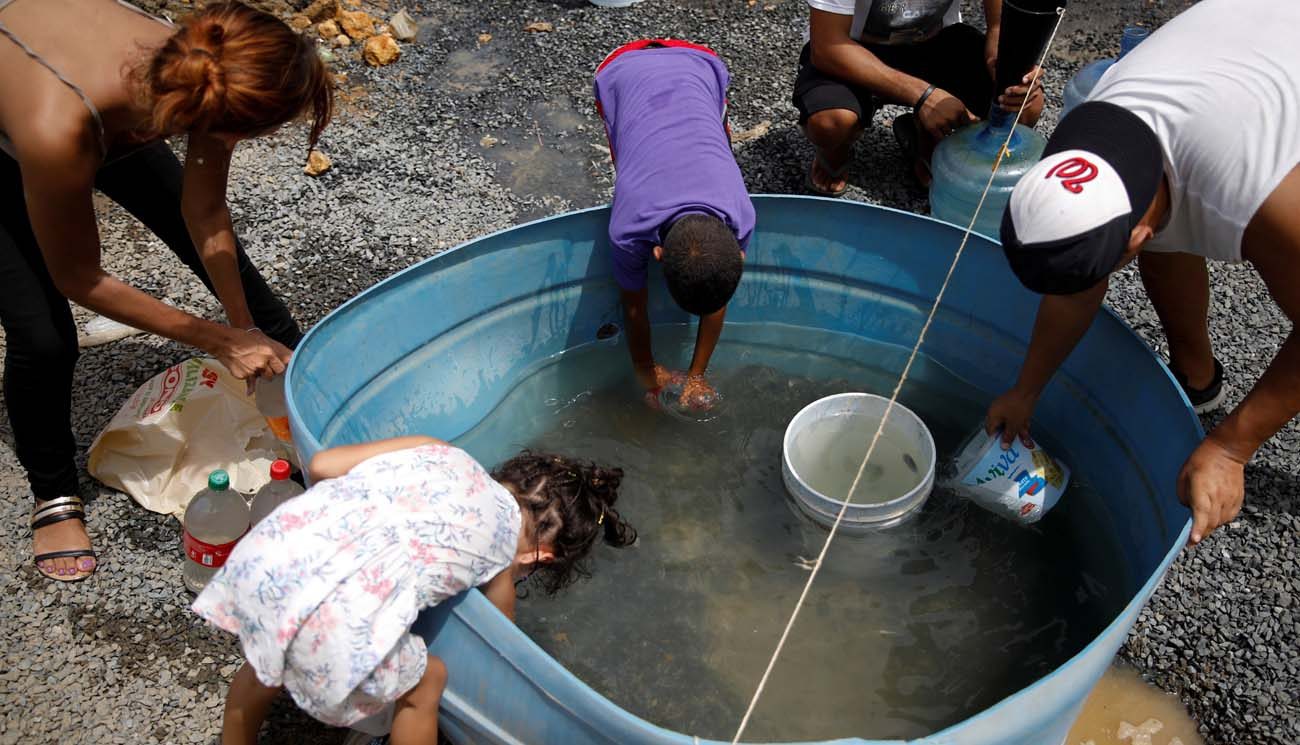 Displaced people fill containers with water Sept. 26 in Canovanas, Puerto Rico, in the aftermath of Hurricane Maria. The Knights of Columbus and other agencies announced they are sending aid to Puerto Rico, which is on the brink of a humanitarian crisis. (CNS photo/Carlos Garcia Rawlins, Reuters)

When Hurricane Maria made landfall in Puerto Rico Sept. 20, its 155-mph winds knocked out electricity to the entire island, leaving its 3.4 million people in the dark. As of Sept. 27, most of the island remained without power. The situation could last up to six months, officials said.

“There’s a humanitarian emergency here in Puerto Rico. This is an event without precedent,” Puerto Rico Gov. Ricardo Rossello said in a statement. He has called for additional assistance from the U.S. government as residents deal with not just the loss of power but a lack of drinkable water, fuel and numerous necessities.

Funds from Catholic Charities USA will assist Caritas Puerto Rico as it begins the work of recovery, a spokeswoman for the agency told Catholic News Service Sept. 27. The Alexandria, Virginia-based national network of Catholic Charities agencies collected the money from thousands of donors across the United States in response to damage done by hurricanes Harvey, Irma and Maria.

The Knights of Columbus, based in New Haven, Connecticut, has raised more than $2.8 million as part of an ongoing national appeal “that builds on the donations and relief work of Knights themselves.”

In a Sept. 26 news release, the organization said it donated $100,000 to Puerto Rico to aid victims of Maria and an additional $100,000 to Mexico for victims of the earthquakes that have struck that country.

In addition to financial support, it said many Knights have helped to rescue stranded neighbors and provide assistance, which has included the distribution of more than $720,000 in food, water and other necessities.

“Charity has always been the defining characteristic of the Knights of Columbus, and people — both those in distress and those who want to help — have placed a great deal of trust in us,” said Knights’ CEO Carl Anderson. “The outpouring of generosity to our appeal by our members and others has been greatly appreciated.”

Dominican Sister Donna Markham, CEO of Catholic Charities USA, is making plans to go to Puerto Rico as soon as it is possible, according to the agency.

Brock Long, administrator of the Federal Emergency Management Agency, told reporters Sept. 26 that that badly damaged airports and seaports are making it difficult to get aid and personnel to Puerto Rico.

Long said 16 Navy and Coast Guard ships were currently in the waters around the island and that thousands more U.S. military personnel and 10 more ships have been dispatched to offer help, including a Navy hospital ship, the USS Comfort.

PREVIOUS: Message of Fatima as important today as 100 years ago, says bishop

NEXT: Priests must understand own weaknesses to really help flock, says bishop