Message of Fatima as important today as 100 years ago, says bishop 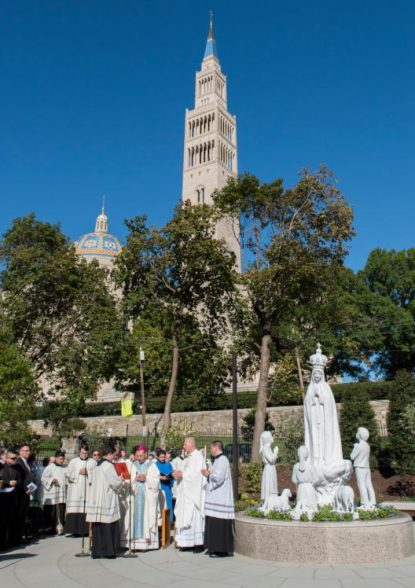 Bishop Frank J. Caggiano of Bridgeport, Conn., leads Catholics in prayer Sept. 23 during the blessing of a new rosary walk and garden near the Basilica of the National Shrine of the Immaculate Conception in Washington. (CNS photo/Matthew Barrick)

WASHINGTON (CNS) — Our Lady of Fatima’s message about prayer, conversion and peace that she imparted to three shepherd children in a field in Portugal “is as important now as it has ever been since” she appeared a century ago, a Connecticut bishop told Massgoers Sept. 23 in Washington.

“We come here to ask for her intercession,” Bishop Frank J. Caggiano of Bridgeport said in his homily at the Basilica of the National Shrine of the Immaculate Conception. “She might lead every human heart to answer the question, ‘What is it that you are looking for?’ And we will answer it: ‘We are looking for your Son, and lead us to him.'”

The bishop was the main celebrant of the Mass, which drew a capacity crowd to the national shrine’s Upper Church. After Mass ended, Bishop Caggiano led a procession of concelebrants, deacons, altar servers and the congregation to a new rosary walk and garden near the shrine. As they walked, people recited aloud the joyful mysteries of the rosary.

People flooded into the garden — which on one side features a white Carrara marble sculpture of Our Lady of Fatima with the three child-visionaries at her feet, Lucia dos Santos and Jacinta and Francisco Marto. On the opposite side is the crucified Christ, sculpted from the same kind of marble.

The paved walkway, symbolic of the thread connecting a rosary’s beads, circles through and around the garden, taking visitors past groupings of colorful mosaics that illustrate the 20 mysteries of the rosary. Bishop Caggiano walked to the Fatima statue, then around the path, blessing the new garden as he went. He ended up back at the statue and led the crowd in prayer.

At the beginning of Mass, Msgr. Walter Rossi, rector of the national shrine, welcomed the congregation, noting the 2,000 pilgrims from the Diocese of Bridgeport in attendance, along with pilgrims from the Philippines and China, the New York area and the Washington region. Bridgeport’s diocesan youth choir sang for the Mass, which was broadcast live by the Eternal Word Television Network, CatholicTV of Boston and New Evangelization Television of the Diocese of Brooklyn, New York.

Thanking donors who made the new garden and prayer walk a reality, he noted the project was an initiative put forward by Bishop Caggiano and Dr. Daisy Lin of Washington.

Opening his homily, Bishop Caggiano asked, “My friends, what are you looking for? What is it that you seek?” This “may sound like a strange question to ask on an occasion such as this and yet it seems to me that is the question that roots each of our lives,” he said.

“It is the reason that we have come here to this sacred place, and on this day of pilgrimage and prayer (it) affords us an opportunity to answer it again in your heart and mine in the mind of Christ,” he said.

Everyone at Mass had “made the sacrifice to break our ordinary routine” to come to the shrine,” he said, but he was sure everyone there carried people in their heart — a family member or friend or neighbor — who “are confused … without direction, without joy, perhaps even without hope” because they listen to the modern world’s voices of secularism and materialism and are unable to find “the rock upon which they are to build their lives.”

“They’re lost … without happiness. … They listen to the voice of relativism that tells them that the only truth that matters is what they believe it to be to be true, rather than a gift to be discovered,” Bishop Caggiano. “And they live their lives without direction. And in our world marked with so much conflict and division, they believe the voice that tells them, ‘My life is all about me,’ and they find themselves alone.”

“We come here perhaps struggling with that sense of hopelessness, helplessness, (asking) ‘How can I help these people?'” he continued. “We have come here because we will put them before Our Lady and we will ask her for her help, her intercession and touch their hearts in a way you and I cannot do.”

Bishop Caggiano also urged the congregation to be aware of how many times in their own lives they all have struggled — and he included himself — “to keep our eyes fixed on Jesus” and have been too stubborn to refuse to see Christ’s face in the poor, the outcast, in the sick, in the immigrant, in the marginalized in our midst?”

“How many times, my friends, has our own pride, yours and mine, prevented us from loving our neighbor as we love ourselves?” he asked. “And we come here to seek forgiveness, to seek a new beginning to allow our hearts to grow.”

“No matter what challenge you and I face,” Bishop Caggiano said, “the Lord will lead us through it, through the intercession of his mother, and to you and I struggling to be disciples, she is our model and guide.”

About 1,500 pilgrims from Bridgeport boarded buses for the one-day trip to Washington; the other 500 came on their own. Pilgrims talked about the experience in tweets and in Facebook postings. “We’ve made it to the Basilica of the National Shrine of the Immaculate Conception! Positively joyful atmosphere here!” one person said in a Facebook post.

“It was such a beautiful and spiritual day for me and my family. I was honored to serve in the Knights honor guard for the Mass,” said George Ribellino.

In an email to Catholic News Service, a member of the diocesan youth choir, Liam Drury, said it “was a very cool opportunity to be invited to sing and to be up on the altar while our bishop celebrated Mass for such a special occasion.”

“The basilica is so majestic and it was amazing to sing in such a beautiful place!” added Liam, a high school sophomore and a member of St. Mary Church in Bethel, Connecticut. “It was very powerful and moving to be part of the procession leading the rosary walk along with our bishop and other priests and pilgrims.”

Mary Bozzuti Higgins, choir director, said the experience for the young singers, ranging in age from sixth-graders to 12th-graders, “was just over the moon incredible.”

Sixty-five members of the 80-strong choir were there. She quoted a sixth-grader who said it best: “It was so pure and so holy I wished every in the world could have been there, how different the world would be if everyone in the world was there to experience it.”

A member of Our Lady of Fatima Parish in Wilton, Connecticut, Bozzuti Higgins is a former opera singer who has traveled the world performing and also has taught voice at Boston University. She noted that directing the choir is “an avenue to combine my faith with love of music” and “couldn’t be a sweeter.”

The youth choir just started its third year, she said, adding that its creation was Bishop Caggiano’s idea as part his overall efforts “to connect kids to their faith.”