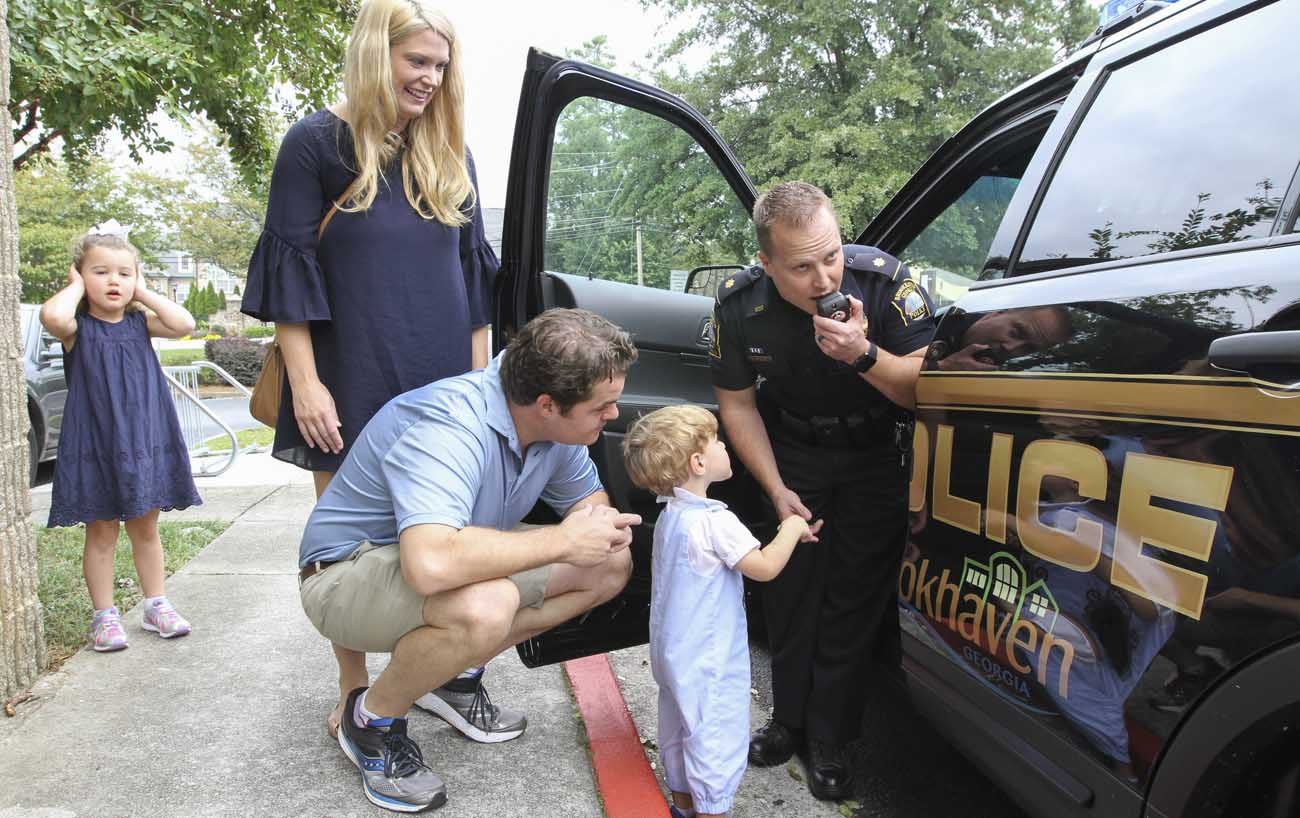 Maj. Brandon Gurley of the Brookhaven Police Department in Atlanta shows 2-year-old Thomas Gioia how it sounds to speak over the police loudspeaker, as his parents, Tom and Ashlyn Gioia, look on Sept. 14. In the background Thomas' 4-year-old sister, Eleanor, covers her ears to block the noise. (CNS photo/Michael Alexander, Georgia Bulletin)

BROOKHAVEN, Ga. (CNS) — The Adopt-A-Cop ministry of Our Lady of the Assumption Church in Brookhaven, launched in late February, is helping parishioners forge relationships with local law enforcement.

The ministry has grown by leaps and bounds as 144 parish families have adopted 54 employees of the Brookhaven Police Department, which has 65 sworn police officers.

Last winter, Deacon Ed Patterson approached her about starting the ministry in support of Brookhaven officers after learning about it from a deacon friend.

“It sounded like a great idea. I was always raised to respect police,” said Stephens told The Georgia Bulletin, newspaper of the Archdiocese of Atlanta.

She didn’t expect to be deeply involved but accompanied the deacon to an inquiry meeting with Brookhaven Deputy Chief Juan Grullon and Sgt. Jake Kissel of the Support Services Division.

Stephens went in thinking the program would consist of sending notes of encouragement and praying for officers. She said the chief and sergeant had more in mind, wanting “to get to know the men and women of the department.”

“They wanted us to have a relationship with them, to build community,” Stephens said. “I was so impressed with both officers that when we got back into Deacon Ed’s car, I told him, ‘I want to run this.'”

Stephens assured them they were not trying to evangelize but to express thanks.

“I was thinking it was going to be a hard sell,” she said.

The parish ministry serves as the Brookhaven and Chamblee chapter of the national Adopt-A-Cop organization, started in 1998 by a police chaplain.

However, the parish has expanded on the program of prayer encouraged by the national group.

She and co-leader Sarah Cash developed surveys for officers to complete about their hobbies, birthdays, favorite restaurants and foods, and interests.

The deputy chief supported that effort but warned her law enforcement officers are a private bunch and not to expect much. To the surprise of both sides, officers enjoyed filling out the surveys.

The community has learned much about those who protect them and the stress of the daily work.

“That has been the amazing part, getting a glimpse of what their lives are like,” said Stephens. “It’s hard on their families and on them.”

Many of the officers commute from outside the Brookhaven area and don’t spend a lot of time socially with co-workers. Brookhaven, in suburban Atlanta, became a city with its own police force in 2012.

The Adopt-A-Cop ministry has given officers something in common as they show off notes of support and talk about eating out with their adoptive families. 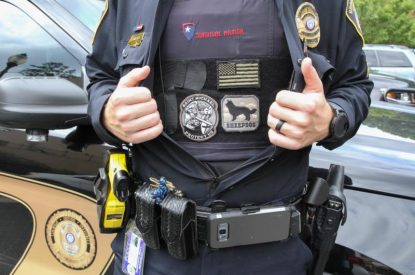 Sgt. Jake Kissel of the Brookhaven Police Department in Atlanta opens his uniform shirt Sept. 14 to reveal the bulletproof vest that bears patches that include an American flag, a sheepdog and St. Michael the Archangel, the patron saint of police officers and other first responders. In some circles police are compared to sheepdogs guarding the sheep, which for officers is the community. (CNS photo/Michael Alexander, Georgia Bulletin)

Each participating family received a packet of information about ways to support their cop. The level of interaction depends on the officer’s level of comfort.

Although Kissel was open to the program, he admitted an apprehension. He thought it would fail. The sergeant was surprised how officers reacted and of the willingness on both sides to build connection.

“To see that it’s going both ways, it’s shocking,” said Kissel. “I think it speaks well of Brookhaven. To have that bond with our citizens, it’s something I’ve never seen before.”

While a parish ministry, each grade of Our Lady of Assumption School and the preschool also adopted officers. The youth group is participating. Other ministries, including the Society of St. Vincent de Paul Society, Loaves and Fishes, Stephen Ministry and Knights of Columbus, have lent support.

“The community has embraced the department. It’s really mind-boggling what this ministry has done,” said Stephens.

When people drop off baked goods or cards at the department, the officers come out to say hello. “It’s like one big happy family. That’s what I want to put out there,” said Stephens.

A friend of Stephens wanted to participate but was fearful about what to say to a police officer. “They’re just real people,” Stephens assured her.

“The Holy Spirit has moved through this program,” she said.

When you hug an officer, it’s impossible to miss the bulk of their bulletproof vests, noted Stephens.

“These people are here to serve and protect,” she said. “They have to go out every day for my benefit.” An increasing number of emails from officers ask for prayers for them or loved ones, she said.

Officers are receiving so many cards that the city manager wants to make a book compiling them. It helps officers remember, “This is why you were called to wear this uniform,” he said.

Kissel talked about storm recovery and police gadgets and showed his bulletproof vest to students. He told them he had never had to use his gun in the line of duty.

A police officer’s job is really about presence, he told the class.

“There’s a story about police officers and comparing them to sheepdogs,” Kissel told students. “You’re our sheep.”

Vijay Devassy, 10, enjoyed the visit to his class.

“I really like the Adopt-A-Cop organization,” said Vijay. Since the class adopted a cop, when he sees an officer out in public, “I try and say thank you,” he said.

Stephens wrote participating families to thank them for their generosity and creativity in adopting members of the police force. She shared the words of officers, including Cpl. Tom Martin and Officer Maria Jones.

“Your church has been so nice. In my 24 years of being in law enforcement, I have never experienced the care and love you guys all show,” wrote Martin. “I enjoy working in Brookhaven and I have worked in some violent places in my career.”

“I believe I speak for all the men and women in blue when I say we appreciate people like you and your church. I appreciate great citizens who are concerned for our well-being, so we can make our communities all a safer place,” Jones said.

PREVIOUS: A week after being hit by Hurricane Maria, Puerto Rico begs for help