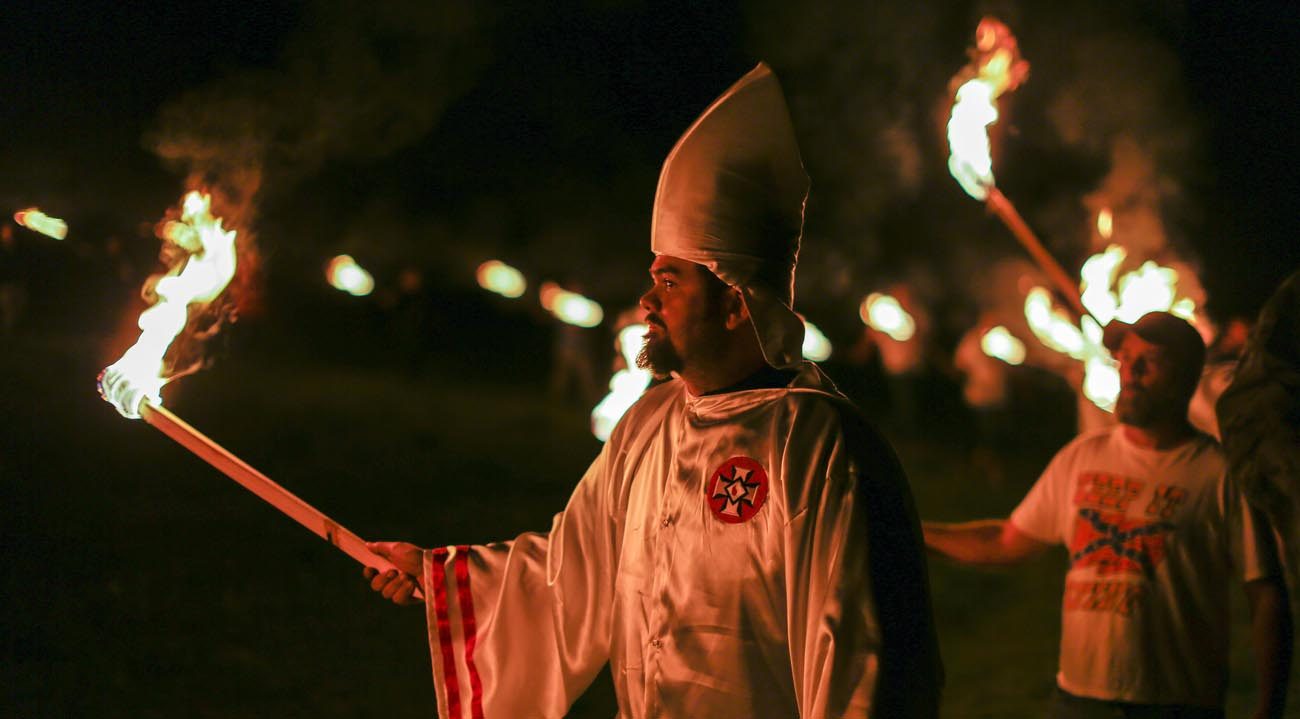 WASHINGTON (CNS) — Given the Ku Klux Klan’s historical animus toward Catholics, one of the most unusual stories that emanated from the aftermath of the Aug. 12 “Unite the Right” march and its deadly aftermath in Charlottesville, Virginia, was the self-penned admission by a priest in the Diocese of Arlington, Virginia, that he had been a member of the Klan 40 years ago, before his entry into the seminary.

The revelation came shortly after a freelance journalist — who, as a child, was a member of a Virginia parish where the priest was assigned — connected the dots and linked him to a cross-burning conviction and civil judgments for this and other racial terror tactics not far from the Maryland suburb where he was raised.The priest’s recent request to take a temporary leave from active ministry was granted by the diocese.

The intersection of the KKK with Catholics came to an ugly head in the 1920s, when the second version of the Klan was making inroads not just in the South but throughout the nation. In the 1920s, the Klan mushroomed in membership. Estimates put its number at between 3 million and 5 million — staggering numbers when the total U.S. population in 1920 was 106,021,537. Subtract Catholics, Jews and African-Americans from that total — they were the groups most despised by the KKK — and the Klan’s always-secret membership could have been equal to 15 percent of the eligible population.

A 1923 dispatch from Bastrop, Louisiana, by NCWC News Service — the initial name of Catholic News Service — spoke of a “crack troop of cavalry” ready to defend townspeople from the Klan, and described a process used by the KKK called “selling out”: “killing as many as possible before a person is killed himself, in other words, trading one’s life for the highest price possible.”

Also that year, the Missionary Sisters of the Most Blessed Trinity declared they would ignore Klan threats in Sterling, New Jersey, and open a retreat house there.

A 1924 story noted how Catholic teachers were blaming the KKK for being discriminated against in hiring in public schools. It was the mission of women in the Klan to protest the employment of Catholics as teachers. The NCWC News Service story listed no cities or states; in fact, it featured two long dashes in place of specific locales.

Given the tenor of the times, there was guilt by association.

Earle Mayfield was dubbed “the KKK candidate” in a U.S. Senate race in Texas because both he and the Klan supported prohibition. Although one Catholic quoted in a 1922 story claimed Mayfield would not win, and not be seated if he did win, Mayfield won handily over a write-in candidate, but was not seated until the following December due to procedural challenges to the election. He served but one term, losing the 1928 Democratic primary. While in office, Miriam “Ma” Ferguson, a Democrat running on an anti-KKK platform in 1924, won a two-year term to become Texas’ first female governor.

In 1924, denunciations were collected from newspapers in Georgia after then-Gov. Clifford Walker addressed a Klan “konvocation” in Kansas City, Missouri. A Dalton Citizen editorial said Walker’s charges against Catholics in the remarks were “back alley gossip about papal control of America, originated by a certain class of people who are selling their souls for money, and who have no more regard for America than for Borneo.”

Two decades later, in 1946, Ellis Arnall, by this time Georgia’s governor, tried to drive a stake through the heart of the Klan in its Peach State birthplace. As the world learned of the extent of the Third Reich’s campaign of extermination of Jews in Europe, Arnall called the Klan “Hitler stuff.”

In Indiana, where the Klan may have been at its strongest in the 1920s, a sensational deposition was given by David Stephenson, once the second in command in the KKK but by 1928, was serving a life term for murder. “Catholic churches were burned and pillaged, riots were incited and political officials bent to corrupt ways through orders of the Klan chiefs,” Stephenson said. “One Klansman traveled all over the United States burning Catholic churches.”

In 1926, Father Peter Rice, the pastor of St. Patrick Parish in Hudson, Wisconsin, and two parishioners had riot charges dismissed against them in a Klan riot earlier that year. Father Rice and the parishioners had approached a Klan tent pitched in the town after being told its occupant had made “insulting charges … against the morals of priests and nuns.” After denying the “slanderous attacks,” according to NCWC, Father Rice left. Later, the tent was pulled down and burned, but the Catholics arrested in the case denied responsibility.

Another clergyman, Bishop Warren Candler of the Southern Methodist Church, speaking to a denominational conference in Clarksdale, Mississippi, in 1927, urged “clergymen and others who belong to the Ku Klux Klan must take off their nightgowns and work in the open at the task of making the world better,” adding he was “not trying to probe the Klan.”

The St. Louis Democratic City Committee in 1923 adopted a resolution against the Klan that read, in part: “The Catholic, the Jew and the Negro are placed in a class that is un-American by this so-called 100 percent American organization, and we, the members of the Democratic City Central Committee of St. Louis, Mo., condemn the actions of this organization as un-American and will use all the power which we possess to uphold the Constitution of the United States and especially the amendment granting civil and religious liberty, so necessary at this time.” Earlier in 1923, the Klan had founded a weekly paper in St. Louis, The Patriot; it filed for bankruptcy in less than a year.

In Richmond, Virginia, in 1925, Klan members of the state House of Delegates said they would sponsor a bill to require all candidates to public office to specify their religious affiliation. There was no later word as to the bill’s fate.

In 1933, prominent Catholic families in Los Altos, California, were sent a threatening letter signed “K.K.K.” ordering them, “Get that Mexican family out of Los Altos and no fooling,” driving home the point with a drawing of a skull and crossbones. The six-child family, on county assistance, was being put up in a house owned by Adeline Brooks, who responded. “I’m a Kansas plainswoman. I sleep with a six-shooter under my pillow and I’ll use it and ask questions afterward.”

But because of the Klan’s anti-Catholic stance, Catholics did not have to be at the forefront of anti-KKK efforts to be considered newsworthy by NCWC News Service.

Nary a Catholic is mentioned in news accounts from 1922 to 1926 in Cleveland and Columbus, Ohio, that described attempts to uproot what NCWC called “the sheet and hood crews” from hotels and parades.

But in Youngstown, Ohio, when a woman marching at a 1928 KKK rally fell faint and was taken to a nearby house to rest, the woman served up some ginger tea to refresh her. “You’re a Christian, lady, a real Christian; maybe you’re a member of my own church, I wouldn’t wonder,” said the Klanswoman. The unnamed hostess replied, “I’m just a plain old woman who tries to do right, but I’ll say this: There is no happier member of St. Patrick’s Church than myself.”

To view the Catholic Research Resource Alliance’s database of NCWC News Service newsfeeds from 1920 to 1952, go to www.thecatholicnewsarchive.org.

NEXT: N.Y. parish hit by Hurricane Sandy conducts Harvey relief to ‘pay back’