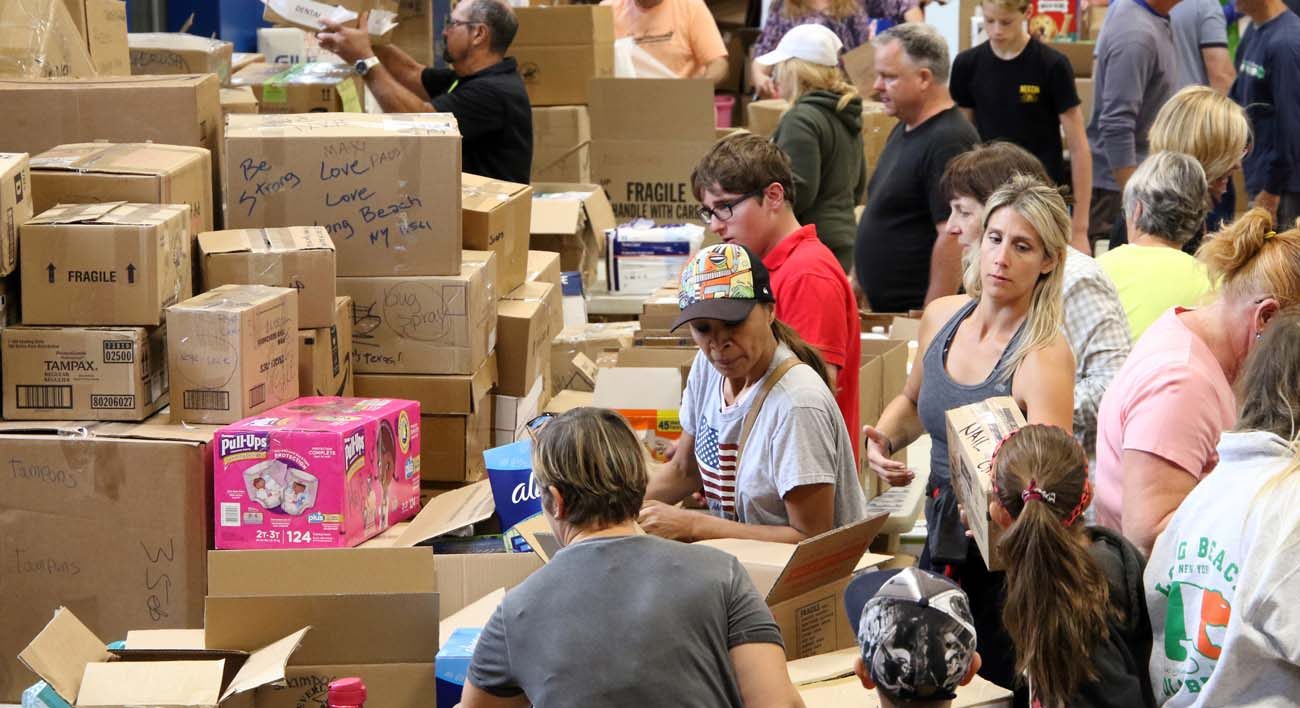 Volunteers are seen Sept. 2 at St. Mary of the Isle Church in Long Beach, N.Y., as they prepare boxes of relief supplies that were to be delivered by tractor-trailer to the victims of Hurricane Harvey in Houston. (CNS photo/Gregory A. Shemitz)

LONG BEACH, N.Y. (CNS) — The parish hall at St. Mary of the Isle Church on the South Shore of Long Island was a beehive of activity Sept. 2 as an army of volunteers packed canned food, baby formula, flashlights, cleaning products and an assortment of other relief supplies into corrugated boxes for the victims of Hurricane Harvey.

Outside the beige brick building, the activity was equally fast-paced as other volunteers stacked and secured the boxed supplies — along with cases of bottled water, bags of pet food and other items — onto wood pallets that were loaded by forklift into the rear of a tractor-trailer. The big rig was one of five needed to transport the several tons of donated goods 1,700 miles to southeast Texas.

The massive relief operation was conducted by residents of Long Beach, a barrier island that has largely recovered after being battered by Superstorm Sandy five years ago.

“We’re returning the favor,” said Father Brian Barr, the pastor at St. Mary’s, a parish in a tightknit community that had been on the receiving end of much-needed aid from other parts of the country following Sandy’s catastrophic blow in October 2012.

“There’s a logical desire to pay back,” he added. “Strangers were there for us, so we’re now there for them.”

The sight of people and supplies filling the parish hall stirred up memories for Father Barr, who had begun his assignment at St. Mary’s just two weeks before the arrival of Sandy.

“In the early weeks after Sandy, the hall looked a lot like it looks today,” the 52-year-old priest told Catholic News Service. “It was a triage center for supplies: water, blankets, food, clothing, tools, batteries and so on … There was an incredible amount of action and activity.”

Back then, the auditorium also doubled as a worship space for Mass after 1 and a half feet of surging water flooded the parish church, ruining the floor, interior walls, pews, organ and sound system. It took 10 months to repair and renovate the structure.

“People in Long Beach watched the news images (from Houston) through a very different lens,” said Father Barr. “What’s going on in Texas is far worse than here, but it was pretty bad here … We know what they’re going through.”

Tim Kramer, 50, owner of a local auto leasing and sales company, and his wife Christina, 42, a professional photographer, are spearheading the Harvey relief efforts in Long Beach.

Like most community residents, the Kramers experienced the emotional trials and tribulations of Sandy and its aftermath. None was more frightening than when the younger of their two sons, 2-year-old Chase, had a near-fatal febrile seizure after coming in contact with contaminated water.

“Everybody in Long Beach was affected by Sandy in one way or another,” Tim Kramer said. “We had 28 inches of water in our basement. There was no electricity, no gas. You couldn’t bathe. You had to cook on a camping stove. You couldn’t do laundry. It was very tough.”

Kramer felt an instant connection to the people of Houston while following news reports on Aug. 27. The images documenting Harvey’s destruction compelled him to organize a local relief effort the next day. After receiving permission from Father Barr to use the parish hall as a staging area for the anticipated donations, he recruited his wife to promote the cause via social media. She also created a crowdfunding website to help finance their efforts. Kramer said a friend in the trucking business helped him secure tractor-trailers, drivers and fuel at a significant “family discount.”

The response from the community was swift and overwhelming. During a five-day period, more than $1 million in relief supplies and gift cards arrived at St. Mary’s Church and about 300 people showed up to organize and box the supplies that came to the parish hall from across Long Island and other parts of the state.

“I never could’ve dreamt that this would be the end result,” he said. “Never in a million years.

“Everyone wants to help. I just provided a way to do it,” he said.

The relief effort will continue and Kramer and his wife along with other volunteers plan to fly to Texas to directly distribute $25 gift cards to people in need. To date, more than $40,000 in gift cards have been donated. A Christmas toy drive is also being considered.

Citing the “great spirit” of Long Beach and the “reality of what happened here five years ago,” Father Barr said the response of the community to assist people of Texas was not unexpected, though the scope of the generosity “stunned” him.

“Because of the (Sandy) experience, there’s an instinctive reaction to step up and help,” he said. “Our faith tells us the same thing. What these people are doing is exactly what Jesus challenged us to do, to reach out to those in need.”