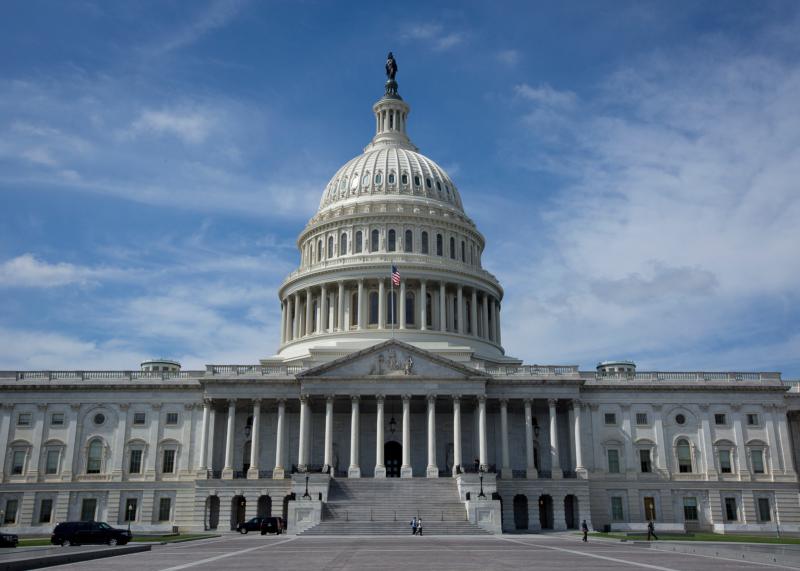 The U.S. Capitol is seen in Washington Sept. 26. The chairmen of two U.S. bishops’ committees Sept. 27 urged Congress to pass disaster relief bill that would ensure fair treatment of houses of worship damaged in natural disasters by allowing them to apply for federal relief. (CNS photo/Tyler Orsburn)

WASHINGTON (CNS) — Lawmakers in Washington were urged to approve a bill introduced in Congress to ensure the fair and equal treatment for houses of worship damaged in natural disasters “by enabling them to seek aid from the Federal Emergency Management Agency.”

The chairmen of the U.S. bishops’ Committee for Religious Liberty and their Committee on Ecumenical and Interreligious Affairs called for support for the measure in identical letters sent to members of the House and Senate.

The bill is the Federal Disaster Assistance Nonprofit Fairness Act of 2017, known as H.R. 2405 and S. 1823 in the House and Senate, respectively.

“The legislation is consistent with Supreme Court jurisprudence, which recognizes the right of religious institutions to receive public financial aid in the context of a broad program administered on the basis of religion-neutral criteria,” said the letter.

A news release was issued Sept. 28 about the letters, which were dated Sept. 27.

“In the Trinity Lutheran Church case decided in June 2017, the U.S. Supreme Court held that it is unconstitutional to discriminate against churches — in a generally available government grant program — just because they are churches,” the two prelates wrote.

In a 7-2 decision in that case, the Supreme Court said a Lutheran preschool should not be excluded from a state grant program to refurbish its playground surface just because it is a religious entity.

Archbishop Lori and Bishop Rozanski said the bill regarding FEMA aid and houses of worship “is not asking for special treatment, just equal treatment that conforms to constitutional protections.”

“It should be noted that in the aftermath of a natural disaster, houses of worship often play an irreplaceable role in the recovery of a community,” they wrote. “Discrimination that treats houses of worship as ineligible for federal assistance in the wake of a natural disaster, beyond being a legal violation, hurts the very communities most affected by the indiscriminate force of nature.”

“The discriminatory policy of excluding houses of worship from disaster relief is not prescribed in any law,” Smith said in a statement when the Senate version was introduced. “The previous administration simply refused to help them. We have an opportunity to change this through future federal disaster assistance programs.”

President Donald Trump has indicated he supports the legislation.

The measures were first introduced in the House and Senate back in 2013, months after Superstorm Sandy devastated New Jersey, parts of New York state and other areas of the Northeast region. The House passed it in a 354-72 vote, but the Senate refused to take up the bill.

NEXT: Congressman Scalise credits power of prayer for his shooting recovery