Congressman Scalise credits power of prayer for his shooting recovery 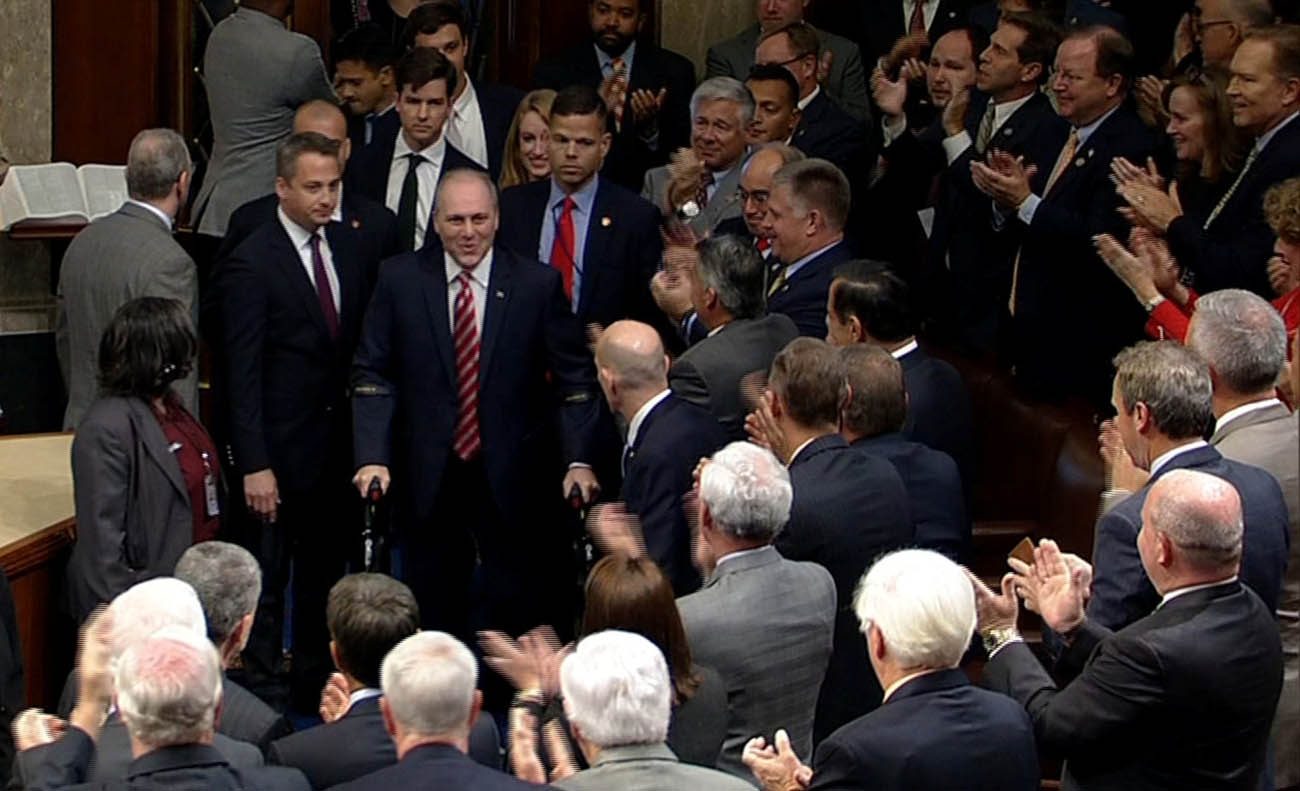 House Majority Whip Steve Scalise, R-La., enters the U.S. House chamber in Washington Sept. 28 after returning to Congress for the first time since being shot and seriously wounded. Scalise was shot June 14, when a gunman opened fire on Republican members of Congress during baseball practice in Alexandria, Va. Two U.S. Capitol Police officers who were part of the Catholic congressman's protective detail also were shot. (CNS photo/TV handout via Reuters)

WASHINGTON (CNS) — Three and a half months after he was shot during an early morning baseball practice, Louisiana Congressman Steve Scalise, the House majority whip, received thunderous applause and standing ovations from the House floor Sept. 28 where he attributed his recovery to the power of prayer.

“I’m definitely a living example that miracles really do happen,” he told his colleagues after acknowledging: “You have no idea how good it feels to be back here at work at the people’s house.”

The congressman, a parishioner at St. Catherine of Siena Church in Metairie, Louisiana, along with his wife, Jennifer, and their two children, said the past few months have been challenging for him and his family, but he said the outpouring of love, warmth and prayer gave them the “strength to get through all of this.”

“It starts with God,” he said, noting that right after he was shot on the Alexandria, Virginia, baseball field and couldn’t move, he “just started to pray.”

“I will tell you, it gave me an unbelievable sense of calm knowing that at that point it was in God’s hands,” he said. He also recounted how he prayed for specific things and many of those prayers were answered, which gave him “renewed faith and understanding that the power of prayer is something that you just cannot underestimate.”

Scalise and fellow Republican House members along with staffers and others were practicing June 14 for the annual Congressional Baseball Game, which is played for charity, when James Hodgkinson from Illinois, who was targeting the group, opened fire. He wounded Scalise and four others, including Capitol police officers on Scalise’s protective detail, a congressional staffer and a lobbyist. The gunman died at a local hospital from gunshot wounds.

The congressman thanked the Capitol Police, especially the officers on his security detail, David Bailey and Crystal Griner. He also thanked the doctors at MedStar Washington Hospital Center who gave him “a second chance at life.”

He thanked his wife and the many people who reached out with prayers and support, including colleagues from both parties and world leaders.

Scalise said many people have asked whether the shooting changed him.

“Yes, it changed me, but not in ways you might think,” he said on the House floor, noting that the experience strengthened his faith in God and his belief in the goodness of people, since he witnessed “how much compassion there is out there.”

A big takeaway for him was the reaction of world leaders, which he attributed not just to their personal concern for him.

“Sure, they cared about my well-being,” he said, but he also is convinced they saw the shooting as an attack on U.S. political leaders as a whole.

“They count on us to be successful,” Scalise said, reminding his colleagues to rise above the challenges of the day because “all around the world, people are counting on us.”

NEXT: Bishops, pope call for prayers after ‘unspeakable terror’ of mass shooting