In receiving pallium, cardinal says he will ‘spend my life for the flock’ 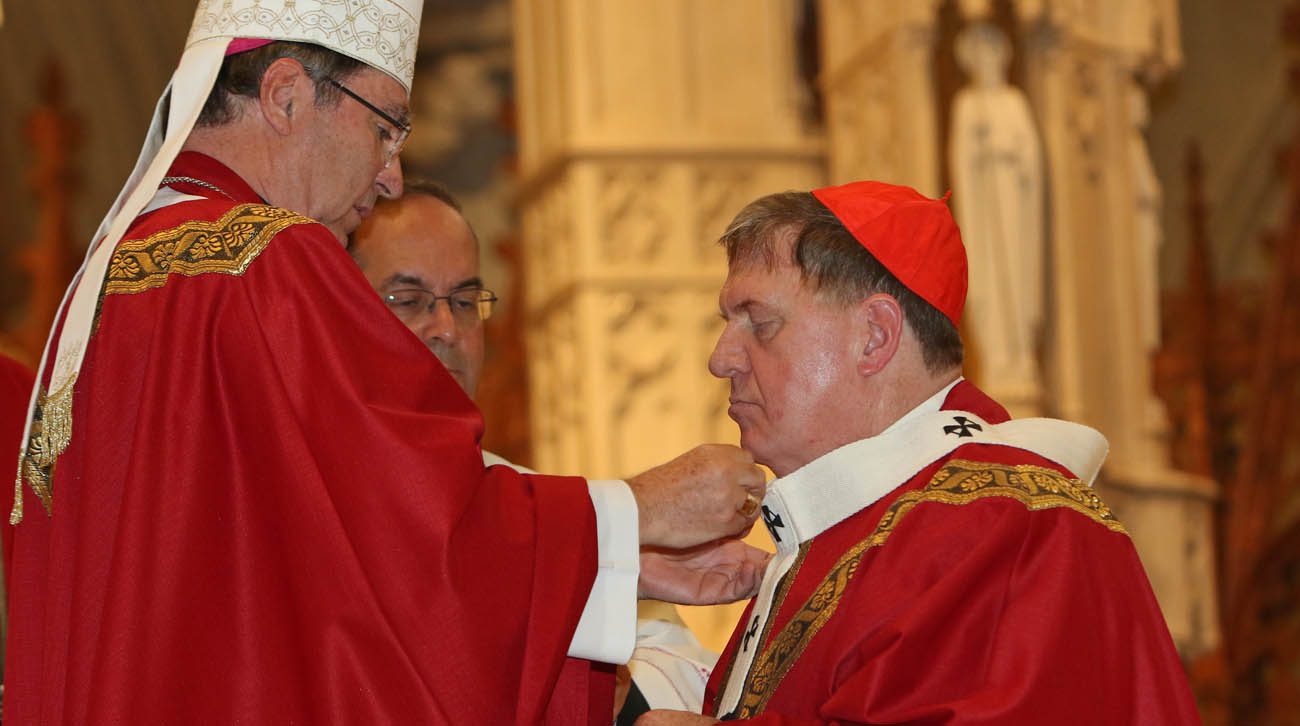 Cardinal Joseph W. Tobin of Newark, N.J., is vested with a pallium by Archbishop Christophe Pierre, apostolic nuncio to the United States, during Mass Sept. 14 at the Cathedral Basilica of the Sacred Heart in Newark. The pallium is a white woolen band worn by archbishops atop their chasubles. It symbolizes their authority over an ecclesiastical province and their unity with the pope. (CNS photo/Gregory A. Shemitz)

NEWARK, N.J. (CNS) — Archbishop Christophe Pierre, the U.S. papal nuncio, imposed the pallium on Cardinal Joseph W. Tobin, the sixth archbishop of Newark, at a Sept. 14 Mass at the Cathedral Basilica of the Sacred Heart.

“I confess that, among all the ‘stuff’ episcopal ministry requires that I wear, the item I appreciate most is what I received today,” Cardinal Tobin said. “Made of pure lamb’s wool and draped over the shoulders, the symbolism of the pallium is even more concrete: The lamb’s wool is meant to represent the lost, sick or weak sheep, which the shepherd places on his shoulders and carries to the waters of life.”

The liturgy took place 10 months into a tenure already marked by outreach and inclusiveness with advocacy for immigrants, the gay community and dozens of visits to deaneries, parishes, schools and archdiocesan institutions.

Although Newark’s other archbishops received the pallium, those ceremonies were in Rome, a practice Pope Francis changed in 2015 when he asked that they be held in home dioceses. This was the first such liturgy in Newark’s cathedral since Oct. 19, 1954, when Newark’s second archbishop, Archbishop Thomas A. Boland, received his pallium on the day the Gothic cathedral officially opened after a half-century of construction.

Worn around the neck, the pallium encircles the shoulders while two bands hang from the front and back. It is embroidered with six black crosses commemorating the wounds of the crucified Christ, while three jewel-tipped pins symbolize the nails that affixed Jesus to the cross. The liturgy was held on the feast of the Exaltation of the Holy Cross.

“In his passion, death and resurrection, Jesus fulfills his mission as the redeemer,” Archbishop Pierre said in his homily. “God comes to save his people, and Jesus saves by giving his life for his sheep, when in obedience, he offered himself freely and fully as an acceptable sacrifice upon the cross. “This is what it means to be a good shepherd: to give life, to offer one’s life in sacrifice for everyone; for you, for me, for every man and woman.

The array of red vestments worn by the prelates in the sanctuary were complemented by the colors an afternoon sun poured into one of the nation’s largest Gothic cathedrals through its 214 stained-glass windows and as its soaring vaults reverberated with hymns led by the cathedral choir, a brass ensemble and the organ’s 9,513 pipes.

Schoolchildren were among the 2,000 worshippers. “It’s great,” Kenneth Macalos, an eighth-grader at Holy Spirit School in Union, said of his first visit to the cathedral. “And I’m excited to see him.”

“This is a historical moment and important in the life of the church,” said Maria Alvarado,” religion coordinator at Holy Spirit. 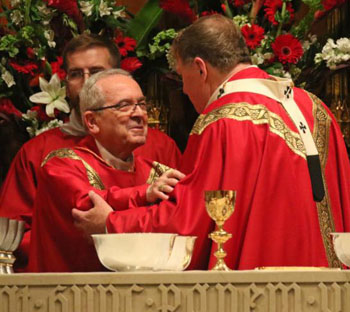 Cardinal Justin Rigali, retired archbishop of Philadelphia, smiles as he exchanges the sign of peace with Cardinal Joseph W. Tobin of Newark, N.J., during Mass Sept. 14 at the Cathedral Basilica of the Sacred Heart in Newark. (CNS photo/Gregory A. Shemitz)

Once just worn by the bishop of Rome, the pallium was subsequently conferred on metropolitan archbishops -– those who preside over an ecclesiastical province. The province of New Jersey consists of the Archdiocese of Newark and the dioceses of Trenton, Camden, Paterson and Metuchen, whose bishops concelebrated the Mass at Newark’s cathedral.

In November, the pope named Cardinal Tobin, then the archbishop of Indianapolis, as Newark’s sixth archbishop. The appointment came barely a month after the pope named him a cardinal but before he received his red biretta. He is New Jersey’s first cardinal.

“In accepting this pallium, I intend to spend my life for the flock, imitating the Good Shepherd who bears all of us on his shoulders,” Cardinal Tobin said at the conclusion of the Mass. “I am aware that Peter once promised something similar to Jesus, and then ran away, so I ask that you pray for me.”

Frank is a staff writer with the Advocate Publishing Corp. of the Archdiocese of Newark.

PREVIOUS: Archbishop calls for peace after verdict, asks community to come together