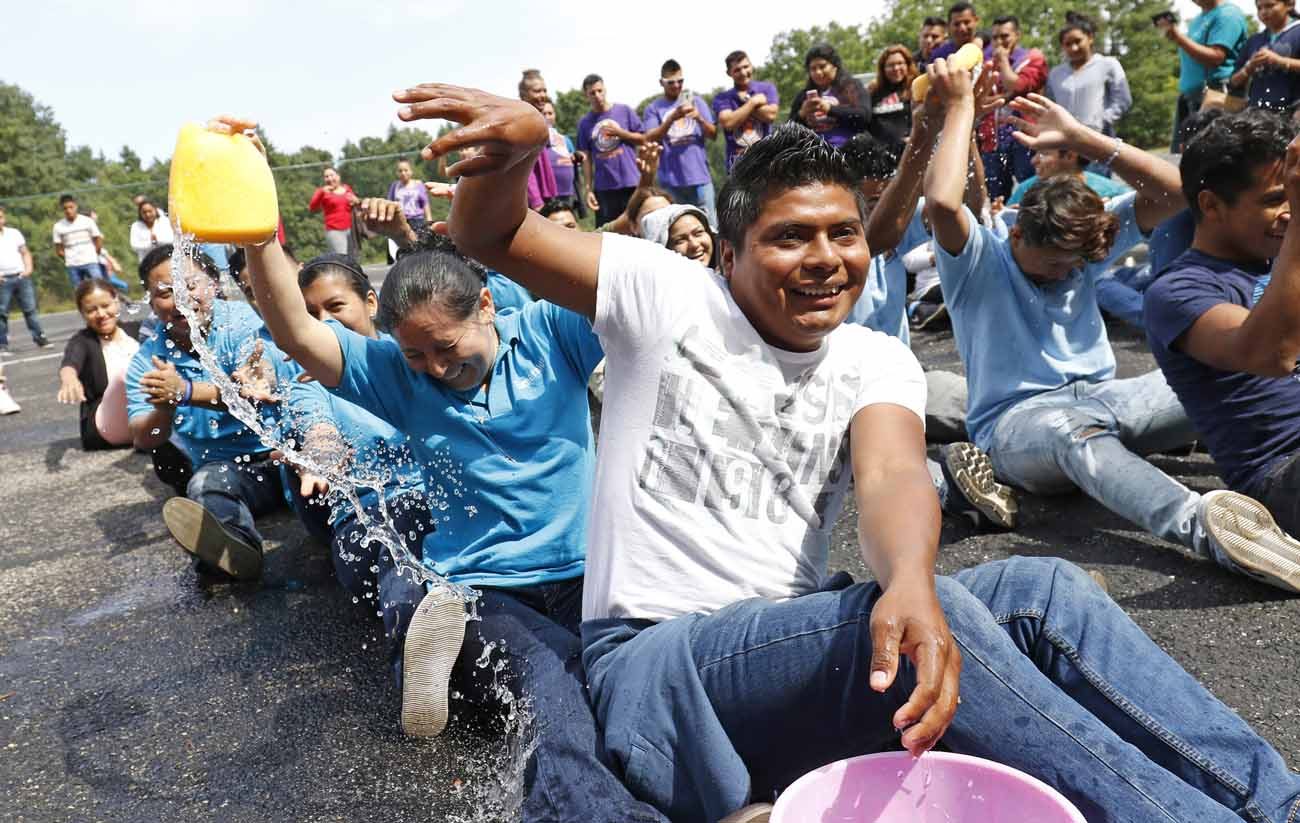 Members of Our Holy Redeemer Church in Freeport, N.Y., pass a sponge soaked in water during a team competition at the annual encuentro gathering in 2016 at Immaculate Conception Seminary in Huntington, N.Y. (CNS photo/Gregory A. Shemitz, Long Island Catholic)

WASHINGTON (CNS) — Most dioceses and archdioceses around the country are holding their diocesan encuentros throughout the fall, highlighting what contributions Hispanic Catholics bring to the Catholic Church and their faith communities.

Anticipation of those gatherings comes as communities celebrate this year’s annual National Hispanic Heritage Month, highlighting Hispanics’ contributions to their communities and to society. The observance began Sept. 15 and runs through Oct. 15.

U.S. census estimates show that about 29.7 million Hispanics/Latinos in the United States identify as Catholics, which represents nearly 59 percent of the total Hispanic population in the country. Among millennials, Hispanic Catholics represent 54 percent of U.S. Catholics born in 1982 or later.

U.S. Catholic officials say the church’s encuentro process is an essential opportunity for many parishes and dioceses to promote and grow unity, leadership and cross-collaboration.

Diocesan encuentros are the current phase of what is a four-year process of ecclesial reflection and action. First came parish-level encuentros, next will be regional encuentros. The process will culminate in the Fifth National Encuentro, known as “V Encuentro,” next September in Grapevine, Texas. Previous national encuentros were held in 1972, 1977, 1985 and 2000.

The purpose, as its name states, is to “encounter” others by reaching out to those at the margins through evangelization, by listening to the concerns of such a diverse community through consultation and preparing emerging ministry leaders.

In the Diocese of San Diego, David Gonzalez, a parishioner at Our Lady of Mount Carmel in San Isidro, California, said the process has helped unify his parish community, engage new leaders including youth and young adults, and focus parish ministry groups on one common mission.

Personally, it has brought him a renewed sense of commitment. “I’m part of the church, I am the church, I need to go out too,” he said in an interview. “My wife and I, we try to continue (it). It is not just a process that happened and we are done.”

The Diocese of San Diego, which serves 1.3 million Catholics, will hold its encuentro Oct. 21. About 250 delegates from participating parishes are expected to attend. The encuentro process in this culturally diverse diocese, where 75 percent of the Catholic population is Hispanic, is offered in both English and Spanish.

Around the country, over 100 of the nearly 165 participating dioceses are holding their diocesan encuentro between August and December. Parish delegates will attend and afterward present a report to their respective diocesan bishops that will include needs, goals, priorities and recommendations.

In the Archdiocese of Washington, 300 delegates representing 30 parishes gathered to contribute their recommendations, which will be presented in a report to Washington Cardinal Donald W. Wuerl Oct. 21 during the archdiocesan encuentro. About 1,000 people are expected to participate.

The delegates identified several priority areas from information gathered from nearly 6,000 people engaged during the process. Those include the accompaniment of families and youth, including single parents, the elderly and those at risk of violence; the need to foster a sense of missionary discipleship, including outreach to non-Spanish-speaking Hispanics; and the call to advocacy and solidarity with immigrants.

“It was pretty evident that folks wanted to be formed in their faith and they wanted to be the ones as missionary disciples, to go out and reach out to these groups.” said Javier Bustamante, chairman of the archdiocesan team for the V Encuentro.

“Our archdiocesan team will be taking a look at these recommendations in the next few months and will continue to come up with strategies, recommendations of best practices, things that we could be doing, both at the archdiocese and the parish level,” he said in an interview.

About 2,000 leaders and delegates from 100 parishes and religious organizations in the Archdiocese of San Antonio were preparing for their encuentro Sept. 30. The encuentro process reaching out to Hispanics and other cultural groups, has been fruitful in many ways, say those involved, including bringing hope and conversion, and helping many return to the church.

In one particularly moving case, it even helped save the life of someone who was considering suicide, according to Lucia Baez Luzondo, director of the Office of the V Encuentro. She also heads the Secretariat for Laity, Marriage, Family Life and Youth at the Archdiocese of San Antonio.

“The spirit and the culture of the encuentro are going to be the backbone of the new pastoral plan of the archdiocese for the next five years. It has been transformational to all of us,” Luzondo said.

In another example of missionary discipleship inspired by the encuentro, a youth group from St. Matthew Catholic Church in San Antonio reached out to a group of young Burmese refugees, who in turn have gotten closer to the parish and its community to the point where about 20 Burmese representatives will take part in the archdiocesan encuentro, Luzondo reported.

Dioceses will share recommendations gathered during their own encuentros with their episcopal regions by next spring and following that will come regional encuentros.

Reports based on recommendations will assist dioceses to better identify strategies, implement recommendations and set priorities in a more inclusive way to continue shaping how Hispanic ministry is done based on Pope Francis’ “Joy of the Gospel,” said Alejandro Aguilera-Titus, national coordinator for the V Encuentro.

He is assistant director of Hispanic affairs in the Secretariat of Cultural Diversity in the Church for the U.S. Conference of Catholic Bishops in Washington.

“The V Encuentro is an implementation of that vision of church that is missionary, that is an example and promoter of justice, that reaches out to those who are most in need, that builds community and understanding,” Aguilera-Titus said.

PREVIOUS: In receiving pallium, cardinal says he will ‘spend my life for the flock’