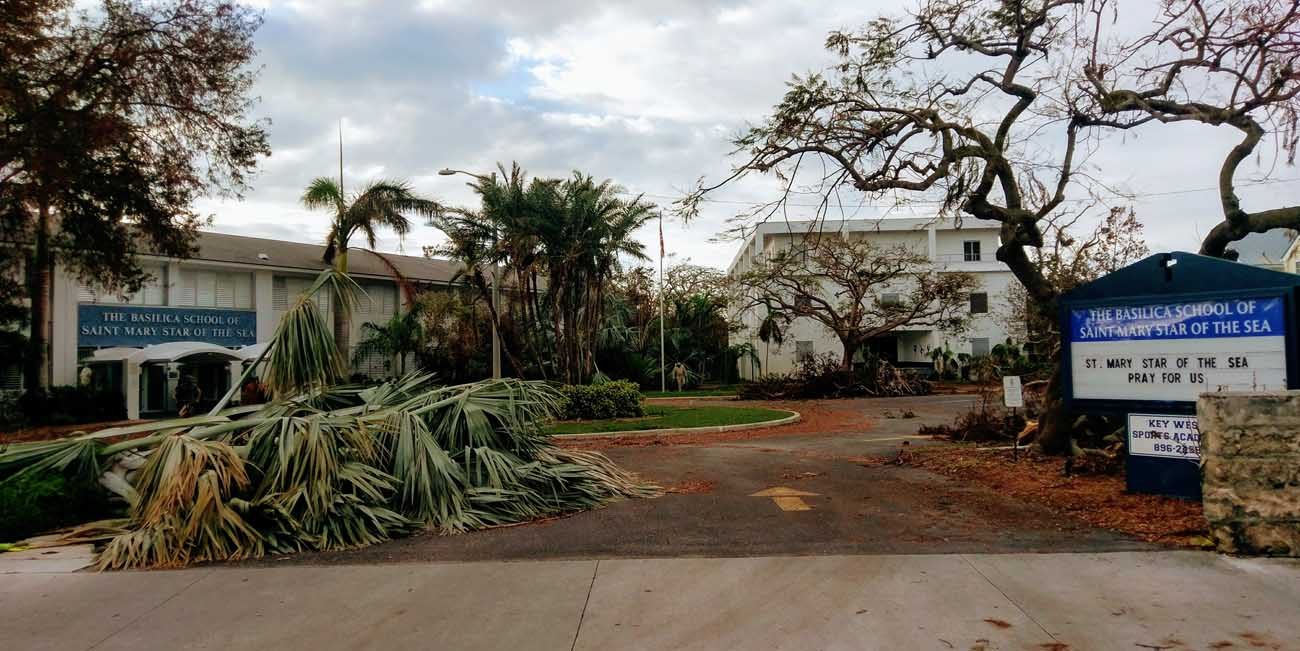 Debris is seen Sept. 16 outside the Basilica School of St. Mary Star of the Sea in Key West, Fla., in the aftermath of Hurricane Irma. (CNS photo/Tom Tracy)

KEY WEST, Fla. (CNS) — Robert Wright, principal of the Basilica School of St. Mary Star of the Sea in Key West, reluctantly left town before Hurricane Irma made its historic landfall, knowing it wouldn’t be easy getting back to Florida’s southernmost tip later on.

Wright drove the Overseas Highway north toward the Florida mainland, braving 50-mph winds, to join his wife and five children who had evacuated to a relative’s home in Lakeland in Central Florida. Wright’s wife, Jessica, is a sixth-generation Conch, or Key West native.

“I had at first decided to stay and ride it out, but my wife wasn’t happy about that, and we have five children,” said Wright, principal of the school since 2013. “So I drove overnight to Lakeland.”

Wright’s fears about returning were well-founded. County officials only began letting residents head back to the lower Keys and Key West early in the morning Sept. 17.

Some days before that, Wright finally found a way back to Key West through a friend who works with a humanitarian aviation agency in Lakeland called Aero Bridge, which was flying post-hurricane relief and supplies to Summerland Key, near Key West. (The main airport in Key West was open only to military and governmental traffic at the time.)

He learned about the flight the night of Sept. 13, and, leaving his family in Lakeland, he boarded the flight the next morning along with his 120-pound dog and a couple of cases of Gatorade.

“It was a humbling sight to fly over the Middle Keys around Marathon Key, seeing the devastation,” Wright told the Florida Catholic newspaper. “I got into Key West, and my first order of business was to find fuel for my car.”

Wright found gas at a marina where his family keeps a boat. He also procured some drinking water, then set out for the basilica’s school. He spent six hours doing a full damage assessment, and spoke to the insurance adjusters and Miami archdiocesan staff working on a cleanup plan.

He contracted with a local company to begin the cleanup process beginning Sept. 18. He set Sept. 25 as the target for a full school reopening.

Meanwhile, the school began operating a half-day of free day care for area youngsters whose families didn’t evacuate and needed a safe place for their children while they recover from the storm. An estimated 8,000 residents remained behind.

“My goal is to open up the school as soon as possible, and I think that is one of the first things a community needs to return to a sense of normalcy,” Wright said.

With some 300 students, most of whom evacuated with their families in advance of Hurricane Irma, the Basilica School of St. Mary Star has been educating Key West children since 1868. The school enrolls students from prekindergarten (age 3) through eighth grade and stands next to the Basilica of St. Mary Star of the Sea, in the heart of Key West.

Key West was not ready for an immediate, rapid return of residents. As of Sept. 18, water service was being rationed, available only four hours each day. Cellphone service was only recently restored, electricity remained out and gasoline was in short supply.

Wright also was visiting members of his staff, faculty and student families who were busy cleaning up homes. His own house suffered some minor damage, and he asked his family to stay in Central Florida until conditions improve.

Meanwhile, he said, Key West has been transformed from a beautiful resort to a beautiful state of neighbor helping neighbor, as restaurants offer free food to locals and people pitch in to clean up the island.

“It’s really is neat to see people dig deep and start to serve others,” he said. “Amidst the chaos there is great charity at work. It’s easy to feel sorry for yourself in a bad situation. But when you see the generosity and care of neighbors, it’s a very pleasant feeling, and it takes your mind off the road ahead.”

It will be months, even years, before the island returns to what it once was, Wright said. Locals point out that 2005’s Hurricane Wilma actually brought Key West more catastrophic flooding than Irma, which will be remembered by locals for its Category 4 winds.

“I have families asking how long this will take and wondering should they enroll elsewhere,” Wright said. He believes the city of Key West in general will lose some students as their families relocate after suffering heavy damage to their homes.

Many faculty and staff of the basilica’s school, however, were waiting for the Key West airport to open to commercial flights to return. The school has its own water wells, which are now functioning again.

“It’s important to focus on the beauty of charity and progress that these moments bring out,” Wright said. “The charm of the island has shifted from palm trees and tiki huts to the beauty of people serving one another.”