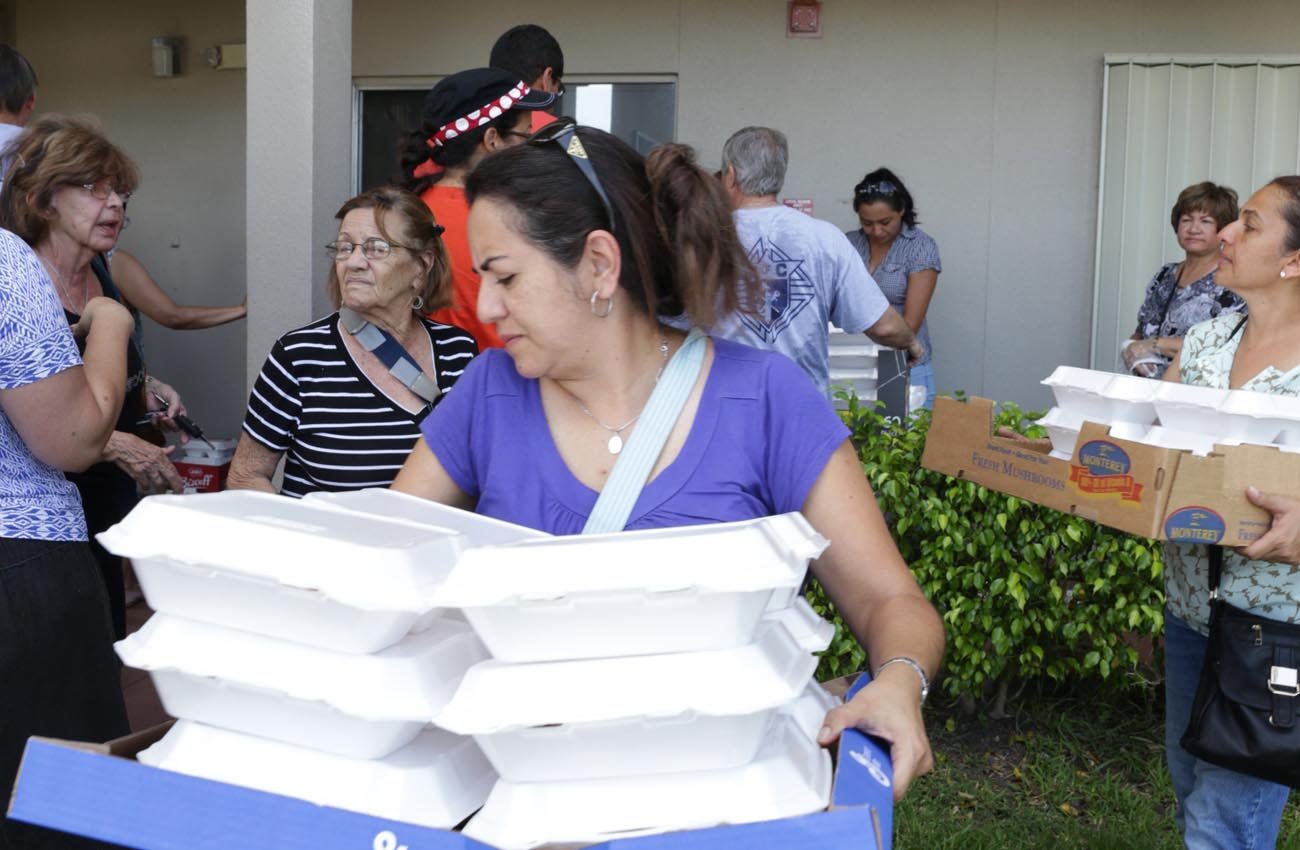 Volunteers from St. Edward Parish in Pembroke Pines, Fla., carry hot meals and set out to knock on doors and check in on senior citizen residents of the expansive Century Village Pembroke Pines housing development Sept. 14. The effects of Hurricane Irma left the residents there without electricity and air conditioning for days. (CNS photo/Tom Tracy)

PEMBROKE PINES, Fla. (CNS) — The nation watched in sadness and outrage at the deaths of eight elderly people in Hollywood without air conditioning and electricity following the historic passing of Hurricane Irma.

Members of nearby St. Edward Parish in Pembroke Pines and the local Knights of Columbus council, hearing the call to be good neighbors, prepared hot meals and set out to knock on doors and check in on senior citizen residents four days after the storm.

The group was given permission to go door to door with their hot meals and water supplies at the expansive Century Village Pembroke Pines housing development in western Broward County Sept. 14.

Residents there reportedly had been without electricity and air conditioning for days, although power was being restored even as the parish volunteers were making their rounds.

According to news reports, police confirmed earlier in the week that about 60 percent of the 15,000-person community of mostly retirees still didn’t have electricity and was under a “boil water” notice. Century Village is a community comprised of people 55 and over.

Compounding the hardships, many elderly citizens at Century Village were unable to get around the four-story buildings because the elevators were not working and some residents couldn’t climb three and four flights of stairs.

The volunteers visited several of the buildings with hot meals consisting of Cuban food and pasta along with bottled water.

Scott O’Connor, the Knights’ state secretary for Florida and a resident of Pembroke Pines, noted that his own mother had lived in Century Village at one time.

“It is a large community built for citizens over 55 years old and in the early days it was primarily Jewish-oriented, but now it is quite an eclectic mix of people and a kind of self-contained city,” O’Connor said. “We are out here helping and that is what we do; it doesn’t matter what religion you are, we are helping everybody.”

One of the issues the housing complex has, he said, is that the residents are susceptible to loss of power and there is only one elevator in each of these buildings.

“Sometimes you have elderly people who may have mobility issues and can’t get down the stairs, and so bringing meals and supplies in for them is really a necessity and something we can do to help,” O’Connor said.

“Normally when we get affected by storms it is localized. But in this particular case, Hurricane Irma affected really all of our Florida jurisdiction. And we still don’t have access to the Florida Keys here on the fourth day.”

Daniel Diaz, grand knight of Council 14698 in Pompano Beach, helped coordinate the food delivery program along with five other Knights.

“Because they lost power here for about a week, all the food in their refrigerator went bad,” said Diaz, who said he rode out the hurricane with his mother at her residence nearby. “This was widespread and went straight up the entire state.”

Diaz, who also is the Knights’ state young adult and college council coordinator, said he will keep looking for ways the Knights can help in the local hurricane recovery. “We are going to keep our ears open and see how else we can serve our community.”

Irma will be remembered as one of the Atlantic’s strongest hurricanes on record, with peak winds of 185 mph and Category 4 strength when it landed in the Florida Keys. Some sources are predicting that insured losses from the storm could total $18 billion in the U.S.

Hurricane Irma also caused significant harm to populations in the Caribbean, including the U.S. Virgin Islands.

“Before Hurricane Irma, we set up the network in terms of communications and figured out who was doing the various positions in the state and with coordination with Supreme,” said Knights District Deputy Peter Chiaravalle, a resident of Fort Lauderdale.

“We were lucky on the east coast of Florida — we didn’t get hit as bad as we thought we might have,” Chiaravalle said. “So a lot of preparation work really paid off.”

Elsewhere in Florida, the Knights were already down in the Keys helping out and a supply truck from the north of the state was waiting to go there, said Joe Cox, public relations coordinator for the Knights’ region six in Florida.

“It is in times like these that we find out who has a willing heart and a ready hand to do something for our fellow human beings who have suffered a lot,” he said.