Share the Journey campaign urges Catholics to connect with migrants 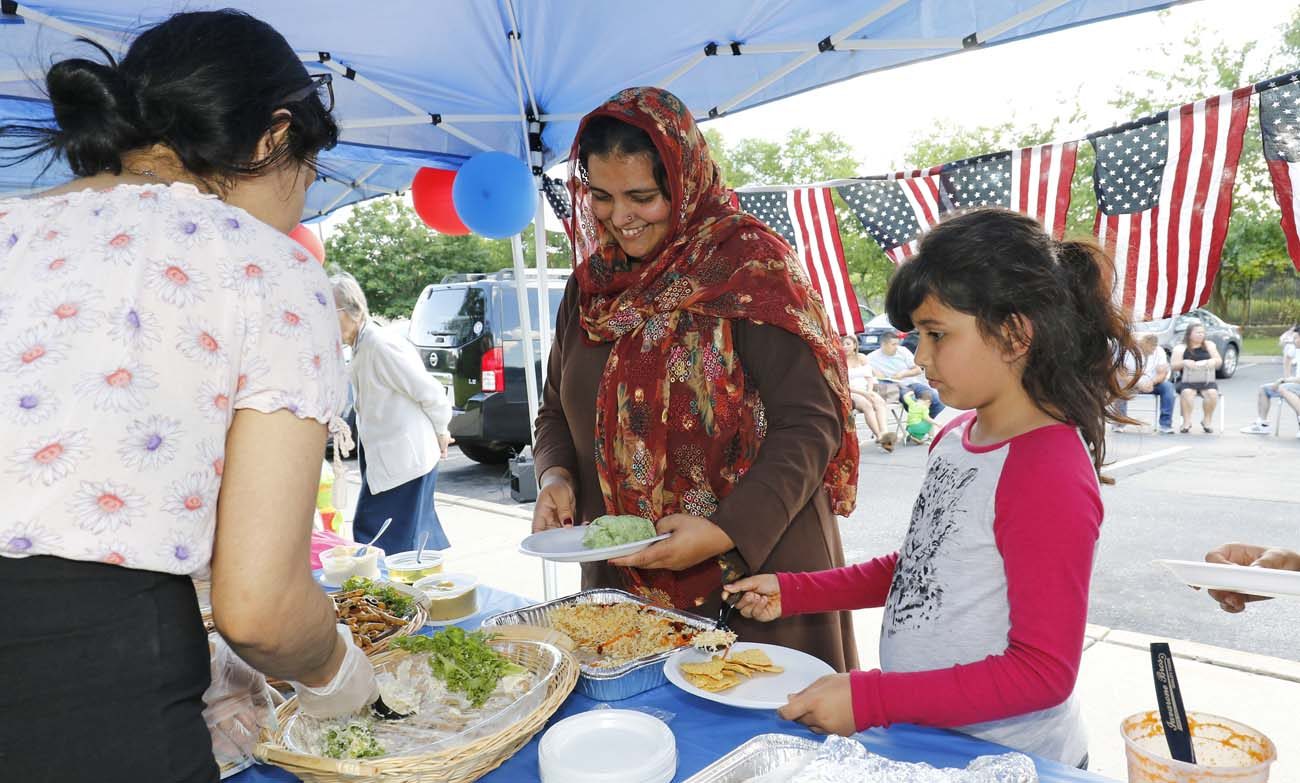 A Pakistani woman and her daughter stand in a buffet line during a Catholic Charities-hosted party for refugees held in observance of World Refugee Day June 20, 2017, in Amityville, N.Y. Pope Francis is hoping Catholics around the world will act over the next two years to encounter people on the move. (CNS photo/Gregory A. Shemitz)

WASHINGTON (CNS) — A prayer here, a share on social media there, a voice of support in a letter to the editor, even a get-to-know-others potluck.

Supporting refugees and migrants can take many forms, and Pope Francis is hoping Catholics around the world will act over the next two years to encounter people on the move.

In the U.S., the church’s leading organizations have developed a series of activities, including prayers, that families, parishes, schools and individuals can undertake during the Share the Journey campaign the pope is set to open Sept. 27 at the Vatican.

Share the Journey is an initiative of Caritas Internationalis, the global network of Catholic charitable agencies. It is meant to urge Catholics to understand and get to know refugees and migrants who have fled poverty, hunger, violence, persecution and the effects of climate change in their homeland.

In addition to Pope Francis’ formal announcement at his weekly general audience, key church representatives, including Cardinal Luis Antonio Tagle of Manila, Philippines, president of Caritas Internationalis, were to conduct a media conference the same day.

U.S. partners in the effort are the U.S. Conference of Catholic Bishops and its Migration and Refugee Services, Catholic Relief Services and Catholic Charities USA.

The effort will give Catholics the opportunity to learn and explore Catholic social teaching on refugees and migrants, said Joan Rosenhauer, executive vice president of U.S. operations for CRS.

“Catholic social teaching has clear messages of caring for strangers, the importance of hearing their stories and understanding their needs,” she said.

Much of the effort will be focused on sharing stories about migrants and refugees, the struggles they face and why they chose to seek a better life elsewhere, said Kristin Witte, coordinator of domestic Catholic educational engagement at CRS, which is the U.S. bishops’ overseas relief and development agency.

The campaign began across the U.S. with special Masses, prayer vigils and events involving local migrants and refugees. The Diocese of Venice, Florida, introduced a photo exhibition and slideshow highlighting the issue. A video about the adult child of migrant workers who now serves as program director for Catholic Charities Guadalupe Social Services in Immokalee, Florida, also debuted.

The coalition of Catholic organizations has developed a toolkit in English and Spanish that includes prayers, suggestions for activities for families, prayer groups, classrooms and clergy, and utilizing social media with references to #sharejourney.

“We’re giving people clear direct ideas, not just in their neighborhood but to mobilize communities. To create an environment or an opportunity for action is critical especially at this time,” Witte said.

Mark Priceman, communications for the bishops’ Migration and Refugee Services, said the U.N. High Commissioner for Refugees estimates that about 22 million people are on the move around the world, making the Christian community’s awareness and response to their situation critical.

Since 1996, the number of refugees admitted has fluctuated between 70,000 and 90,000 annually. The number of refugees to be accepted each year is determined by the president under the Refugee Act, which was signed into law in 1980 by President Jimmy Carter. The act amended earlier law, created a permanent and systematic procedure to admit refugees, and established a process for reviewing and adjusting the refugee ceiling to meet emergencies.

Share the Journey looks to mobilize people quickly. Soon after the opening, the campaign is calling for a week of prayer and action for migrants and refugees Oct. 7-13.

Special prayers at Masses, prayer vigils, simulation exercises, school announcements, lesson plans and speaking events are among the activities suggested as ways to learn about people on the move.

Similar activities will be taking place worldwide throughout the campaign, Rosenhauer said.

Nearly three dozen cardinals, archbishops and bishops as of Sept. 25 have pledged to participate in the campaign, according to the U.S. Conference of Catholic Bishops.

Archbishop Thomas G. Wenski of Miami addressed the concepts of the Share the Journey campaign in an op-ed column Aug. 28 in the Sun Sentinel in Broward County, Florida.

“‘Share the Journey’ invites us to see through the eyes of others rather than turning a blind eye,” he wrote. “As Pope Francis says, ‘Not just to see but to look. Not just to hear but to listen. Not just to meet and pass by but to stop. And don’t just say, ‘What a shame, poor people,’ but to allow ourselves to be moved by pity.'”

The campaign will take advantage of specially designated days throughout the year to raise awareness, including the feast of Our Lady of Guadalupe Dec. 12; Lent; the church’s observance of National Migration Week in January; World Refugee Day June 20 and the September 2018 United Nations meeting to consider two global compacts on refugees and migration.

There also is an advocacy component to Share the Journey, Rosenhauer said, giving U.S. Catholics the opportunity to take what they learn about migrants and refugees and approach federal policymakers to better allocate international assistance to address the factors that cause people to flee.

Together with Catholics worldwide, the U.S. organizers said they hope the campaign will begin to ease the burdens under which migrants and refugees live.

“We’re mobilizing the worldwide Catholic Church to serve,” Witte said. “There are so many networks that the Catholic Church already has that we can infuse an opportunity allow them to live their baptismal call and to stand up for the most vulnerable.”

Editor’s Note: More information and a toolkit on Share the Journey is available online at www.sharejourney.org. Learn more about the international campaign at journey.caritas.org.

NEXT: Couple were touched by love when they opened hearts to adoption