Couple were touched by love when they opened hearts to adoption 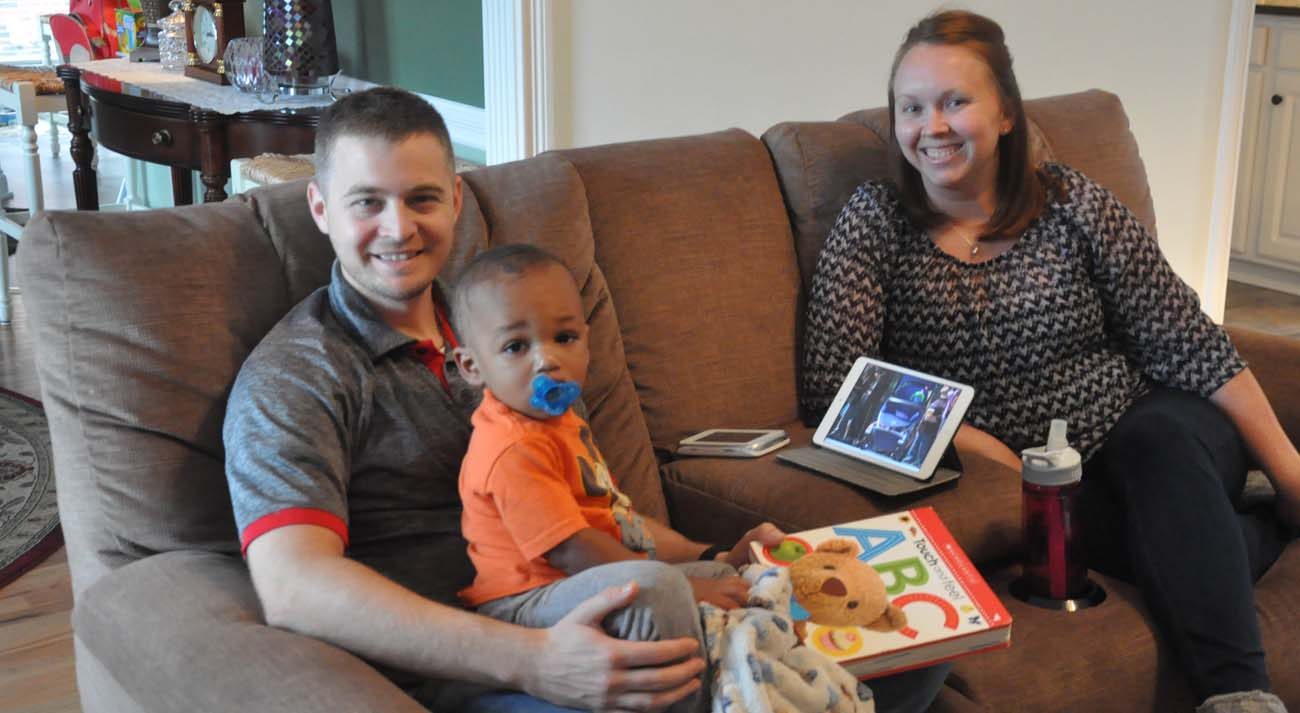 In late April, Jaxson Amschler, then 18 months old, sits with his father, Joe Amschler, and his mother, Jenni Amschler, at their home in Kentucky. The couple adopted Jaxson through Adoption Bridges of Kentuckiana, a ministry of St. Elizabeth Catholic Charities in New Albany, Ind., in the Archdiocese of Indianapolis. (CNS photo/Natalie Hoefer, The Criterion)

LOUISVILLE, Ky. (CNS) — Jenni and Joe Amschler recall the birth of their baby boy with love and awe.

“I fell in love with him as soon as he was put on my chest,” said Jenni. “It was an instant bond.”

“It was instant” for Joe, too, he said. “I did the first skin-to-skin. I changed the first diaper. I mean, that was our baby.”

The fact that the couple’s skin was white and their baby’s was a beautiful brown was of no consequence.

“I love him as my own. I didn’t give birth to him, but how could you not love this little baby?” she said, hugging 18-month-old Jaxson as he sat on her lap during an interview this past April.

“He is my son, who I will love, support and take care of his every need,” Joe said.

Like so many couples who had trouble conceiving, the Amschlers opened their hearts to adoption.

Unlike some couples who adopt, the Amschlers know the birth mother — and of her refusal to have an abortion.

This is the story of their pro-life adoption journey through Adoption Bridges of Kentuckiana, a ministry of St. Elizabeth Catholic Charities in New Albany in the Archdiocese of Indianapolis.

During one such move, the couple suffered their first miscarriage. Their second miscarriage happened while they were stationed in Arizona.

“Grieving was difficult because we didn’t know anyone and were far from family,” said Jenni told The Criterion, Indianapolis archdiocesan newspaper. “And we were always transitioning from one place to another, so we didn’t have time to focus on the grieving.”

After researching the cause of the infertility, and even a surgery, the couple remained childless.

Joe entered the Army Reserves in 2013. He started working at General Electric, and the couple settled in their hometown of Louisville. The couple suffered their third miscarriage and decided they were ready to pursue adoption.

“We always knew we wanted to have children,” Jenni added. “And when we couldn’t have our own, then we reached out to friends who we knew were going through the adoption process. They were the ones who led us to Adoption Bridges (of Kentuckiana).”

The agency, a Louisville-based ministry of St. Elizabeth Catholic Charities in New Albany, works with women in unexpected pregnancies who seek loving families for their babies rather than abortion.

“The agency does a lot of work and effort in locating these forever families,” said Mark Casper, agency director for St. Elizabeth Catholic Charities. “Unfortunately, for every baby that’s able to be placed for adoption, there are 10 to 20 families wanting to adopt.”

Casper said several aspects of Adoption Bridges differentiate it from other agencies, such as an all-day training for couples seeking to adopt; free lifetime mental health counseling for the parents of the adopted child, the adopted child and the birth parents; residential options if the mother chooses to raise her child; and legal licenses to handle adoptions both in Indiana and in Kentucky.

The Amschlers found all those features appealing, plus the fact the agency only deals with infant adoptions.

“We’ve never been parents before, so we wanted that (experience of) every two hours you have to get up and change the diaper and feed the baby,” said Jenni.

Supporting the agency’s pro-life cause also figured into the Amschlers’ decision.

“There are definitely circumstances outside a birth mother’s control, especially in this day and age where there are so many influences and things that are wrong in the world,” said Joe. He and Jenni acknowledge the strength it takes for a birth mother “to have her child and love them enough to place them up for adoption.”

Jenni added that the birth mother had the strength to fight pressure from her father to have an abortion.

The Amschlers filled out an application for Adoption Bridges that allowed them to specify such preferences as gender, multiple births, ethnicity and more. The agency offers monthly meetings for couples waiting to adopt.

Even nearly two years after adopting Jaxson, the Amschlers still keep in touch with the members from their former support group of couples who joined the adoption journey at Adoption Bridges during the same time frame.

The agency also offers support also to the birth mothers as well. Said Joe, “It’s definitely a two-way street, it’s not just about us. That makes us feel good.”

At Adoption Bridges, the birth mother uses portfolios made by couples to select the family she thinks will be best for her unborn child. Shortly after Jaxson’s birth mother chose the Amschlers, the couple met her.

Jaxson’s is an open adoption, meaning that he can one day meet his birth mother, if he chooses.

“We talk about her to Jaxson,” said Jenni. “We’re very open. He has two biological brothers. We’ll keep that open to him in the future.”

Jaxson is now 22 months old, and the Amschlers hope to adopt a second child, though it could be 18 months to two years from now.

“We know God has a plan for our family and will send us the perfect baby at his timing,” said Jenni.

“You have to step outside of your comfort zone — it’s going to be rewarding,” he said.

NEXT: A week after being hit by Hurricane Maria, Puerto Rico begs for help