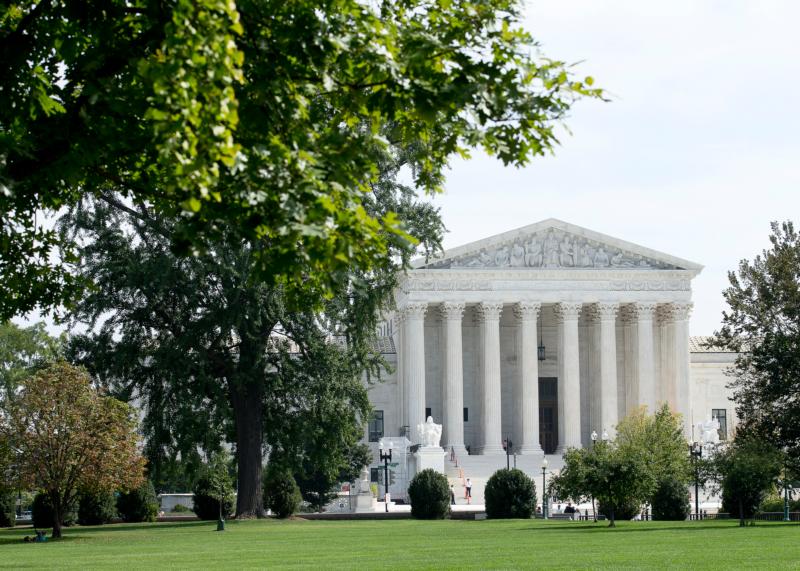 WASHINGTON (CNS) — With the Supreme Court’s new term starting Oct. 2, one person equipped to comment on it — Supreme Court Justice Ruth Bader Ginsburg — hesitated to say too much but hinted that it would be interesting.

“There is only one prediction that is entirely safe about the upcoming term, and that is it will be momentous,” she told first-year law students Sept. 20 at Georgetown Law where she was invited to speak as the school’s 2017 distinguished lecturer.

Ginsburg made her remark about the upcoming term after highlighting a few of its major cases, including the court’s plan, at that time, to hear oral arguments Oct. 10 on the constitutionality of President Donald Trump’s executive order restricting travel from individuals from specified countries into the United States.

Just five days after her address — confirming that the term was already interesting — the Supreme Court announced it was canceling arguments on the president’s order, often described as the travel ban, “pending further order of the court.” That’s because the court wanted to consider the Sept. 24 revision to the ban — its third update — adding three more countries to its list including two that are not majority Muslim, a factor that could protect the order from charges that it showed religious discrimination.

The Supreme Court allowed the president’s order to take effect temporarily in June, blocking some federal appeals court rulings that would have increased the number of travelers exempt from the ban. After the order was revised again, the court asked both sides to file briefs by Oct. 5 to debate changes that could make the case moot or at least sent back to lower courts.

The religious aspect of the initial versions of the travel ban — barring people from some predominantly Muslim countries to the United States — is what the U.S. Conference of Catholic Bishops took primary issue with in its friend-of-the-court brief filed Sept. 16 along with Catholic Charities USA and the Catholic Legal Immigration Network.

The brief said the president’s order had the purpose and effect of “discriminating against Muslims” since it singled out “the populations of six overwhelmingly Muslim nations for sweeping immigration restrictions that apply nowhere else in the world.”

“Such blatant religious discrimination is repugnant to the Catholic faith, core American values and the United States Constitution,” the brief said. It added that the order also “poses a substantial threat to religious liberty that this court has never tolerated before and should not tolerate now. Having once borne the brunt of severe discriminatory treatment, particularly in the immigration context, the Catholic Church will not sit silent while others suffer on account of their religion as well.”

Another big case, still on the docket, which the USCCB also has weighed in on, centers on Jack Phillips, the owner of the Colorado-based Masterpiece Cakeshop, who refused to make a cake for a same-sex wedding. The case pits anti-discrimination laws against freedom of speech and freedom of religious expression.

The baker in this case says the state should not be able to compel him to bake a cake with a message that celebrates a same-sex wedding, which goes against his religious beliefs. The state argues that businesses open to the public are required to comply with the state’s anti-discrimination law, even if the owners have religious or moral objections to providing certain services.

The brief stressed that “American citizens should never be forced to choose between their religious faith and their right to participate in the public square.” It also said there was much more at stake than simply a cake, saying it was about the “freedom to live according to one’s religious beliefs in daily life.”

It also said freedom of speech and religious expression applies to institutions and individuals and by siding with the state in this case the court would “would negatively impact the freedom” of institutions to continue their public ministries, specifically pointing out Catholic Charities and other faith-based organizations that provide foster and adoption services to children and “have been forced to shut down rather than comply with government mandates to place children with same-sex couples on the same basis as opposite-sex couples.”

The brief said: “The government should never penalize individuals like Phillips, or organizations like Catholic Charities, for their long-held beliefs about God’s teachings regarding marriage. Instead, the First Amendment, properly construed, protects religiously motivated individuals and organizations who seek to discern the truth and then act on it, including in the public square.”

Michael Moreland, professor of law and religion at Villanova University in Pennsylvania, said Justice Anthony Kennedy’s vote “will likely be decisive for the outcome of the case,” noting that he “rarely sides against a freedom of speech claim but is also the author of several landmark gay rights decisions.”

As in year’s past, the Supreme Court is also scheduled to hear oral arguments on the death penalty with one case scheduled and another one they might take up. They will hear oral arguments in the case of Carlos Ayestas, sentenced to death in Texas in 1997. His new legal team says Ayestas was not given effective counsel since details about him were withheld from the jury that might have persuaded them to give him a life sentence.

The court may also take up the case Hidalgo v. Arizona, which would more broadly address the death penalty. Arizona death row inmate, Abel Daniel Hidalgo, has been arguing for the past three years that the state’s death penalty law is unconstitutional because it doesn’t do enough to narrow who is eligible for the death penalty among those convicted of murder.

On Sept. 26, the Supreme Court issued a stay of execution for a Georgia inmate who claimed a juror’s racial bias placed him on death row. The stay was granted while the court considers if it will take up his appeal.

Other cases on the docket for the court, back to full strength with all nine justices this term, include whether congressional and state legislative election districts can be drawn to benefit a political party; if police can use cellphone location data to track suspects without a warrant; if companies can bar employees from class-action lawsuits; and if a federal ban on sports betting in most states violates their regulatory powers.