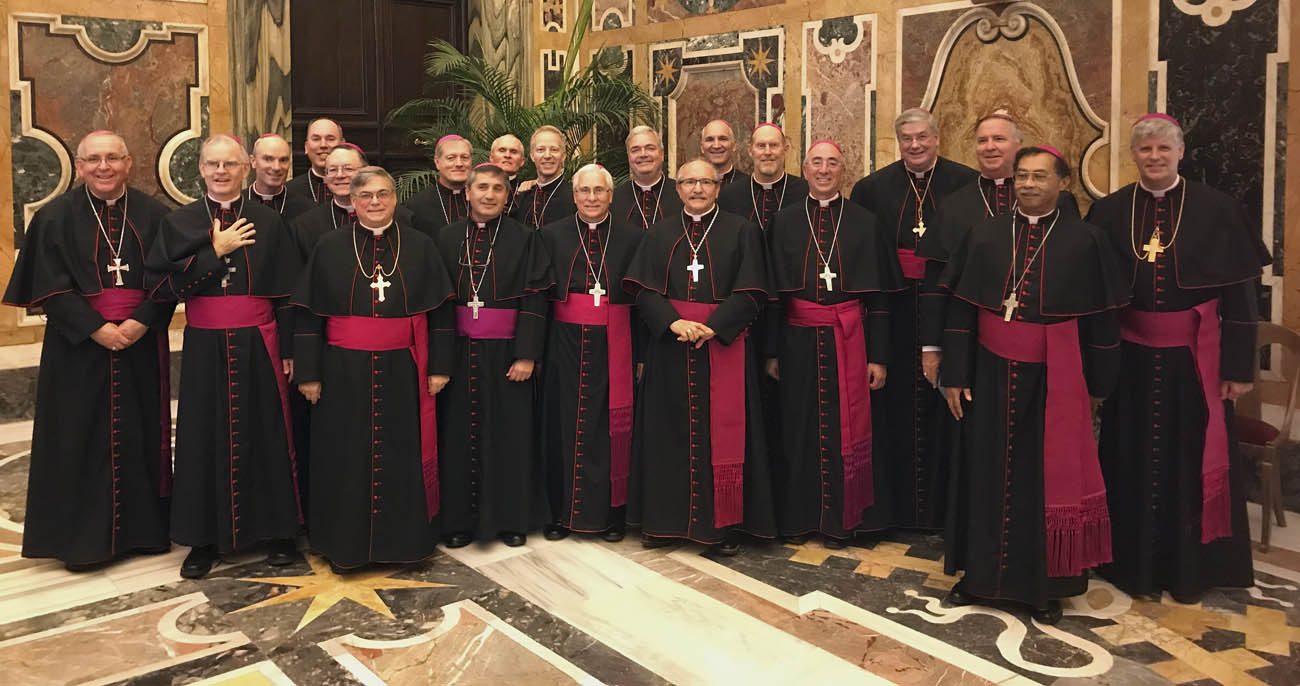 Twenty of the 21 U.S. bishops who attended the annual Vatican's “school for new bishops” pose for a photograph during a meeting with Pope Francis at the Vatican Sept. 14. (CNS photo/courtesy of Bishop William Wack)

VATICAN CITY (CNS) — A bishop cannot truly discern God’s will by lording over his flock; rather he must listen to and participate in the lives of those entrusted to his care, Pope Francis told some 120 new bishops.

A bishop’s discernment is a “community action” that cannot disregard “the richness of the opinion of his priests, deacons, the people of God and those who can offer a useful contribution,” the pope said Sept. 14 at the end of the annual Vatican training for new bishops.

“The bishop is not a self-sufficient ‘father-ruler,’ nor is he a frightened and isolated ‘solitary shepherd,'” he said.

Entering the Clementine Hall of the Apostolic Palace, Pope Francis was greeted with warm applause by the men he had named to lead dioceses around the world. Seeing so many bishops in one room, the pope jokingly asked them, “Is this the third Vatican Council?”

In his speech, the pope reflected on the “pastoral and spiritual discernment” a bishop needs to guide men and women in “their search for life and happiness.”

To lead their flocks, bishops must themselves be guided by the Holy Spirit, which comes only from a personal relationship with God through prayer, and which helps them in “being wise in their choices and in their personal and ecclesial behavior.”

True discernment, he said, lies in “cultivating a listening attitude” that does not rely on “the eyes of others,” but uses one’s own eyes to see “the places and people, the spiritual and cultural traditions of the diocese.”

Humility toward one’s own plans and priorities and obedience to the Gospel and the teachings of the church also are necessary components of discernment, which serves as remedy to the “immobility of ‘it’s always been done this way’ or ‘let’s take some time.'”

A bishop “cannot take for granted” that he has wisdom, as if it were “an acquired right” that comes with ordination, the pope said. No, wisdom is a gift which must be prayed for continually.

And, he said, “I invite you to cultivate an attitude of listening, growing in the freedom to give up your own point of view — when it is shown to be partial and insufficient — in order to assume God’s.”

A bishop’s discernment is a “creative process” that is an “antidote to rigidity because the same solutions aren’t valid everywhere,” Pope Francis added.

“Remember that God was already present in your dioceses when you arrived and he will still be present when you have gone,” the pope told the new bishops. “In the end, we will all be measured not by an accounting of our works but on the growth of God’s work in the hearts of the flock that we watch over in the name of the shepherd and guardian of our souls.”