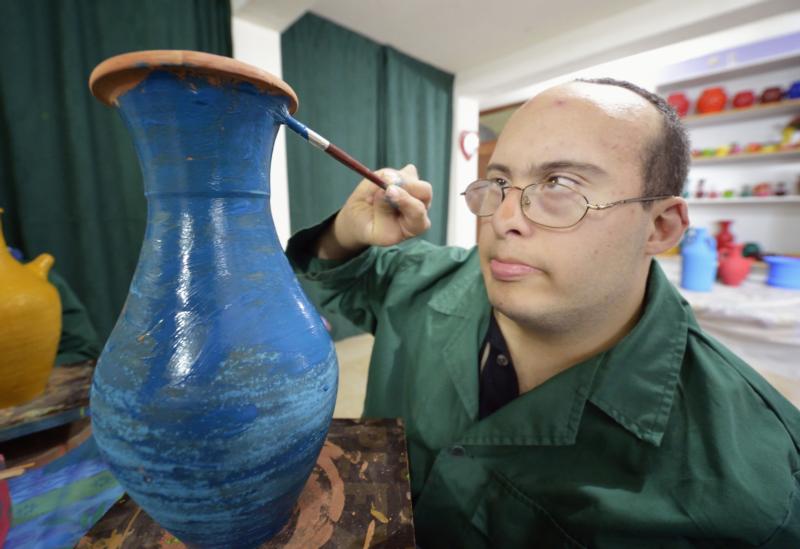 Patrick paints pottery in 2015 at Phenix Group Homes, an organization in Beirut that provides residential and day care for people living with intellectual disabilities. Catholic groups are developing a new tool to rank countries’ work in human and environmental development. (CNS photo/Paul Jeffrey)

The idea is to have an effective tool that measures using Pope Francis’ encyclical “Laudato Si'” as the basis for the initiative.

The “Laudato Si'” Observatory will be launched at the closing of the Ratzinger Foundation’s international symposium, scheduled Nov. 29-Dec. 1 in San Jose, said Fernando Sanchez, head of the Catholic University of Costa Rica.

Sanchez, a former Costa Rican ambassador to the Vatican, said the observatory hopes to prompt research and “to provide nations’ governments an absolutely academic tool … to promote positive change, which is what the pope is asking us to do, and it would be our major contribution with this symposium.”

In the 2015 encyclical, Pope Francis urged a conversation that includes everyone and the need for a conversion to bring about lasting change on how people view the environment.

Sanchez said the papal encyclical is the framework for the observatory and its output and, compared to other measurements already implemented, “the great difference is that this index will have the church’s social doctrine as its anchor.”

“The possibilities to prompt change with this index are enormous,” he said.

The symposium, “On Care for Our Common Home, a Necessary Conversion to Human Ecology,” aims to make it “utterly clear that the struggle for human, social, environmental development is not an ideological issue,” Sanchez said.

“And also, he clearly says that it’s a real issue … climate change,” although “some new leaders have tried to say it’s an invention,” said Sanchez, who reaffirmed that “it’s real, it’s urgent, it’s global and it’s not ideological.”

The three-day event, to be held at a luxury hotel on the outskirts of this capital city, features presentations by Cardinal Claudio Hummes, retired head of the Vatican Congregation for the Clergy and president of the Brazilian bishops’ Commission for the Amazon; Cardinal Giuseppe Versaldi, head of the Vatican Congregation for Catholic Education; and Tomas Insua, research fellow at the Harvard Kennedy School and executive director of the Global Catholic Climate Movement.

Sanchez said there is high expectation about general participation in the symposium, because scholars, entrepreneurs, environmentalists and students have been invited.

“The great challenge we have here is to take an issue, which is for all an important issue, discuss around it and do it in a simple way, as the pope is doing,” he said.

In his view, “one of the pope’s marvels … is that he has managed to ‘democratize’ the Holy See’s message, because everyone understands him. You may be in favor or against him, but you undoubtedly understand him, and this encyclical is a good example,” he said.

NEXT: Bishops called to be humble shepherds, not lonely masters, pope says