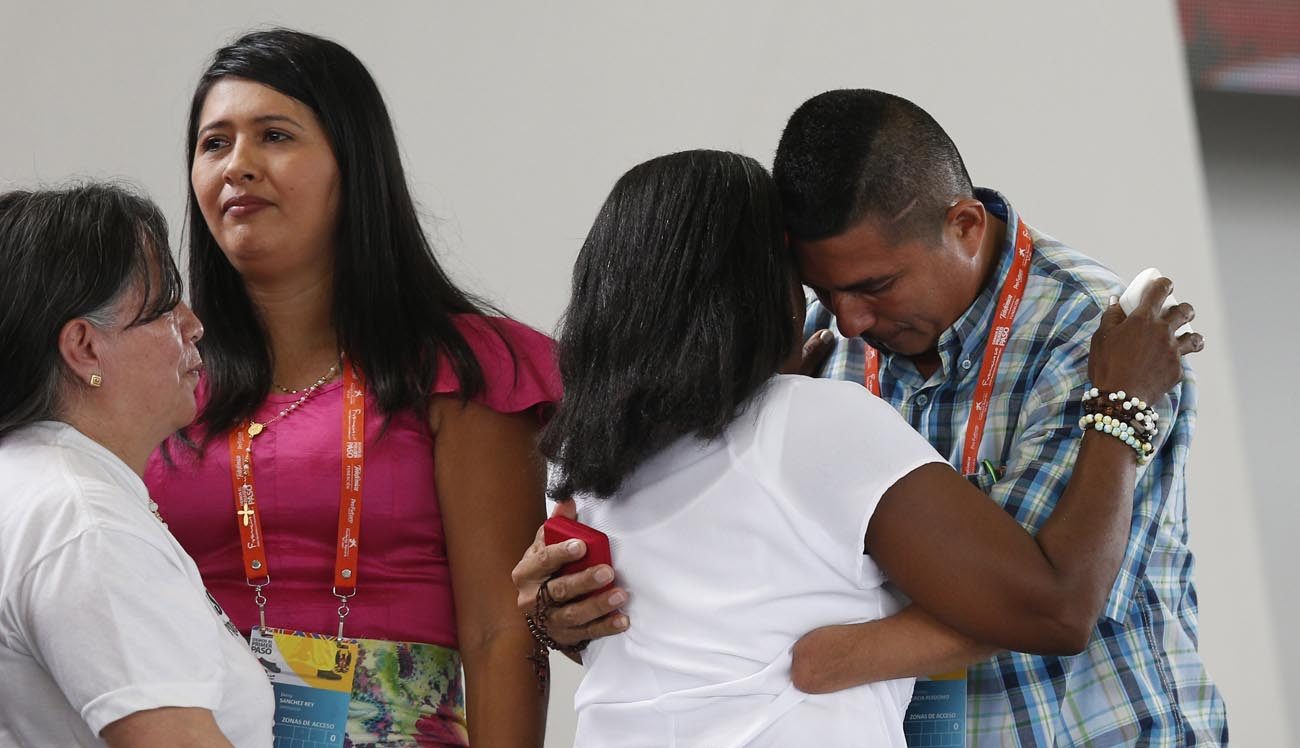 CARTAGENA, Colombia (CNS) — Pope Francis said he had no magic words or special recipes for Colombians seeking peace, but rather he wanted to listen to them, learn from them and travel a bit of the road with them.

He had a small accident on the road Sept. 10 in Cartagena, the last city and last day of his five-day trip: Riding in the popemobile down a street packed with people who wanted to see him, Pope Francis turned and bashed his face on the edge of the window, cutting his eyebrow and provoking a sizable bump on his left cheekbone.

While the bruise would fade, the overall experience of the trip was likely to linger. “I really was moved by the joy, the tenderness … the nobility of the Colombian people,” he later told reporters flying back to Rome with him.

Before ending the trip with a Mass in Cartagena, Pope Francis had visited Bogota, Villavicencio and Medellin. He celebrated a large outdoor Mass in each city and had a packed schedule of meetings with government officials, bishops, youths, children living in a group home, and with priests, religious and seminarians.

The painful realities of Colombia’s recent past were openly acknowledged with tears and hugs Sept. 8 in Villavicencio. At a national prayer service for reconciliation, a former member of the main rebel group and a former fighter with a paramilitary group shared their stories and asked forgiveness. A woman who lost two small children in the fighting and another still limping from injuries suffered in an explosion in 2012 offered to “forgive the unforgiveable,” as Pastora Mira Garcia, the mourning mother, told the pope.

The theme of his trip was “Let’s take the first step,” and Pope Francis told reporters he hoped that, after he left, Colombians would take a second step.

Pope Francis seemed confident. No matter how thorough political leaders and professional mediators are in bartering and building consensus, he said, “the protagonist of peacemaking is the people; if not, it will only go so far.”

Cardinal Ruben Salazar Gomez of Bogota told the pope Sept. 7 that the process of building peace “has become a source of political polarization that every day sows division, confrontation and disorientation.”

But the cardinal also brought up an issue Pope Francis repeatedly warned could undo any hope for peace.

“We are a country marked by deep inequalities and inequities that demand radical changes in all fields of social life,” the cardinal said. “But it does not seem we are willing to pay the price required.”

No peace deal can last without addressing the poverty and social exclusion that led so many people to fight in the first place, the pope said.

“If Colombia wants a stable and lasting peace,” he said Sept. 10, “it must urgently take a step in this direction, which is that of the common good, of equity, of justice, of respect for human nature and its demands. Only if we help to untie the knots of violence will we unravel the complex threads of disagreements.”

With St. Peter Claver, the 17th-century Jesuit saint and apostle of the slaves, never far from his mind, Pope Francis asked Colombians to ensure all the nation’s people are part of its progress.

The pope ended his trip in the city where the saint died and his relics are venerated.

St. Peter Claver ministered tirelessly to the African slaves brought to the Caribbean port town in the 1600s, and “he faced strong criticism and persistent opposition from those who feared that his ministry would undermine the lucrative slave trade,” the pope said, standing in front of the church built in his honor.

St. Peter Claver knew what the Gospel was calling him to do, the pope said, even though it was not popular at the time.

With great respect for what Colombians have suffered and admiration for the faith and hope they managed to maintain despite a 52-year civil war, Pope Francis asked them to look beyond their old behaviors and alliances and ask what new thing God might want of them.

“We are called upon to be brave, to have that evangelical courage which springs from knowing that there are many who are hungry, who hunger for God, who hunger for dignity, because they have been deprived,” the pope said at a Mass in Medellin Sept. 9.

Throughout the trip, it seemed like the pope had all the time in the world. He never seemed to tire. He never cut short a speech and told those who waited for hours that they would get printed copies of the full text. In fact, on several occasions he added long sections — particularly when talking about the evils of the drug trade.

And every evening, after a long day of traveling, reading speeches and celebrating Mass for hundreds of thousands of people, he set aside time for spontaneity.

With the doors of the apostolic nunciature where he was staying just a stone’s throw away, Pope Francis would watch the evening’s groups perform a folk dance or sing songs or play instruments. One or two or three of them would make a little speech describing what their organization does. And the pope would respond with a few remarks of his own.

No more than 2,000 people could gather on the street outside the nunciature for the evening encounter, but it may have been Pope Francis’ favorite part of the day.

Throughout the trip, he urged every Colombian to make some gesture of peace: to forgive someone or help someone. On a small scale, that’s what the groups that outside the nunciature were doing, whether that meant offering shelter and a future to street children, promoting the social inclusion of young people with Down syndrome or strengthening fragile families.

PREVIOUS: Church leaders, including from U.S., pray for victims of quake