Church leaders, including from U.S., pray for victims of quake 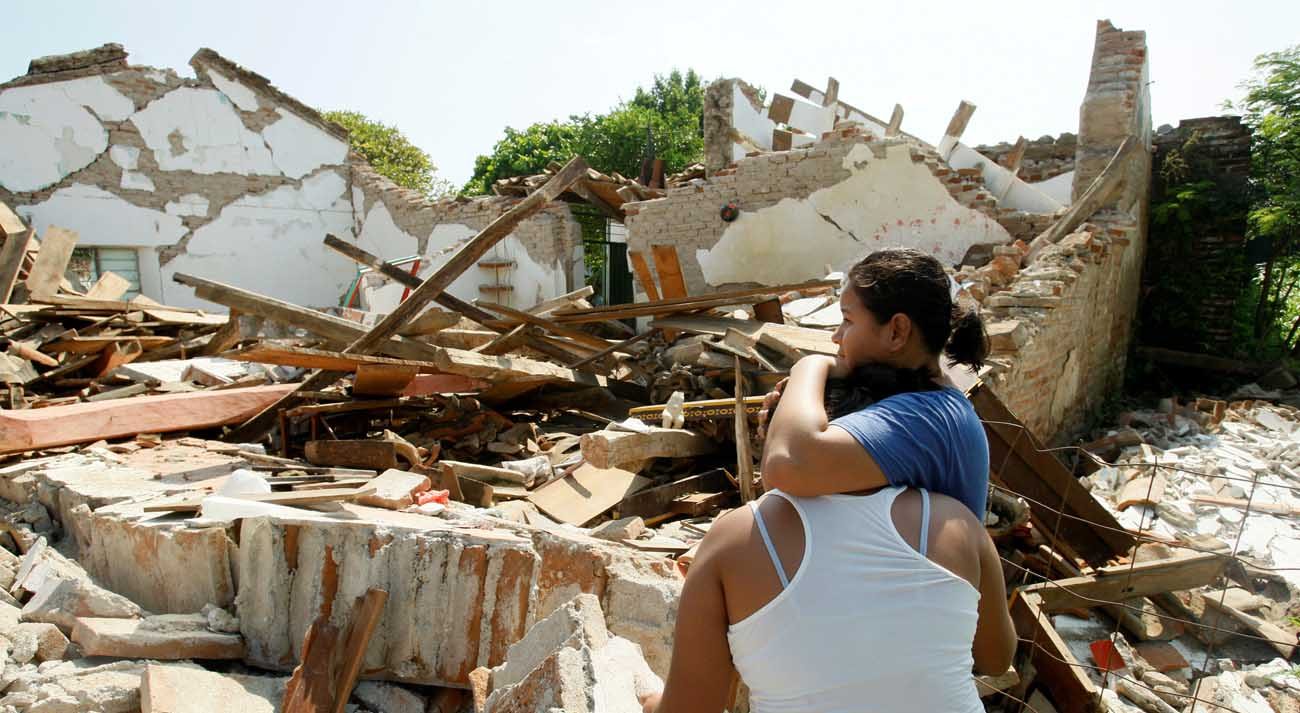 Women embrace while standing next to a destroyed house Sept. 10 following a magnitude 8.1 earthquake in Union Hidalgo, Mexico. Church leaders prayed for Mexicans and Guatemalans affected by the Sept. 7 earthquake that struck the Pacific Coast. (CNS photo/Jorge Luis Plata, Reuters)

CARTAGENA, Colombia (CNS) — Church leaders prayed for Mexicans and Guatemalans affected by the magnitude 8.1 earthquake that struck the Pacific Coast.

At the end of Mass in Villavicencio, Colombia, Sept. 8, Pope Francis prayed “for all the people who are suffering because of the earthquake last night in Mexico.”

In an early morning tweet, the Mexican bishops’ conference prayed, “God strengthen us as brothers in the faith to (be) available to those that have suffered in this strong earthquake.”

Later, the bishops said, “We want to express our solidarity with the Mexican people in the face of this suffering caused by the earthquake last night. … We offer prayers for the victims and especially the family and populations affected, mainly in the states of Chiapas, Oaxaca and Tabasco.”

They also praised “the many prevention and security measures undertaken in buildings, along with the immediate actions of the authorities through civil protection programs.”

“We realize, however, how far we have to go in our caring for creation,” they added.

Cardinal Daniel N. DiNardo of Galveston-Houston, president of the U.S. Conference of Catholic Bishops, called for prayers “for the victims and their families, as well as for emergency personnel and rescuers.”

“The Mexican and Guatemalan people are resilient in their faith and trust in the loving providence of God,” he said. He entrusted them to Our Lady of Guadalupe, “who, amidst the sorrows of life, reminds us today as she did 500 years ago: ‘Am I not here who am your mother? Are you not under my shadow and protection? Am I not the fountain of life?'”

The Sept. 7 quake occurred shortly before midnight. In less than 24 hours, Mexico’s seismology service reported more than 260 aftershocks, with the strongest registering magnitude 6.1.

By midday Sept. 10, Mexican officials put the death toll at 90, with most of the deaths occurring in the southern state of Oaxaca. Rescuers raced to rescue people trapped under rubble in the city of Juchitan on the Isthmus of Tehuantepec, 450 miles southeast of Mexico City, where the city hall partially collapsed.

Two children died in Tabasco state, with one dying after being crushed by a falling wall. The toll was expected to climb, and school was canceled in 10 states and Mexico City so officials could assess structural damage.

Father Alejandro Solalinde, a priest working with migrants in Oaxaca state, tweeted “solidarity and prayers with those affected by the earthquake in Mexico. Eternal rest for the deceased. Amen.”

State officials in Chiapas reported 1,000 homes destroyed and another 5,000 damaged. Several churches in the Diocese of San Cristobal de Las Casas were damaged, according to media reports.

A diocesan priest, Father Marcelo Perez, said some churches were damaged, but was unable to say how many. The Catholic Church in Chiapas was attending to some of the displaced people, he added.

Other churches across southern Mexico were damaged by the earthquake, including four in the state of Oaxaca.

The quake appeared to do little serious damage to Mexico City, which was devastated by a similarly strong quake in 1985. That earthquake left thousands dead and many more homeless. The federal government — responsible for Mexico City at the time — offered an inept response, forcing people to fend for themselves, and many Mexicans rose to the occasion by forming brigades to pull people out of rubble, including babies from a collapsed children’s hospital.

Experts say the epicenter being located around 400 miles to the southeast of the national capital may have made the earthquake less catastrophic in Mexico City, too.

Since that disaster, building codes in the national capital have improved, and earthquake drills are commonly practiced by apartment residents and office workers.

An earthquake was not the only disaster Mexico has had to deal with. Hurricane Katia slammed into the Veracruz coast Sept. 8, but weakened to tropical storm status after reaching land. The Veracruz state government reported two deaths due to mudslides triggered by the storm.

NEXT: Bruised, not broken: Pope encourages Colombians to pursue peace