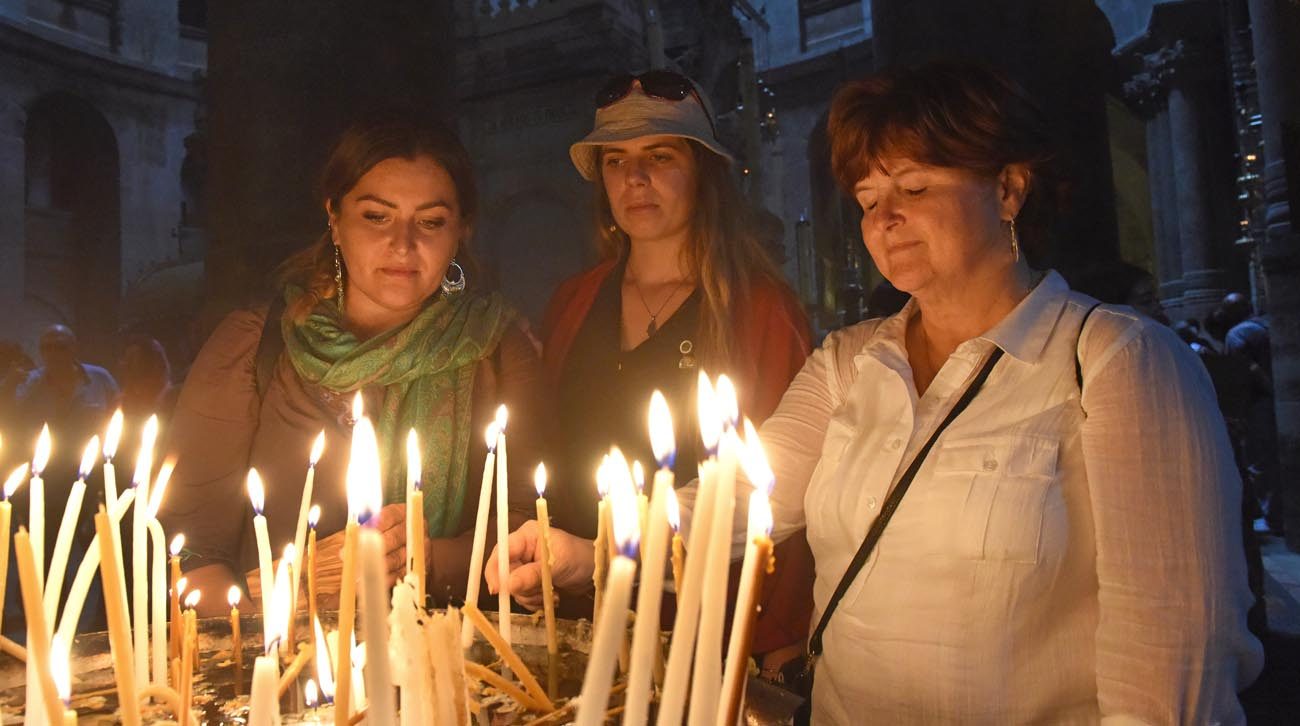 JERUSALEM (CNS) — Inside the Church of the Holy Sepulcher, U.S. Army veteran Rocio Villanueva fell onto the stone of the unction where tradition holds that Jesus was laid out after his crucifixion and touched her head to the smoothed surface.

Injured during a tour of duty in Iraq and diagnosed with post-traumatic stress disorder, the 31-year-old engineering specialist and mother of four was raised in a Catholic home but had slowly lost touch with her faith. After almost a week in the Holy Land as part of the second group of women veterans participating in the Heroes to Heroes program, Villanueva felt a spiritual renewal.

“Since the third day I got here I felt a healing in my heart. At the Church of the Annunciation (in Nazareth), I felt so good and able to speak to God,” said Villanueva, a member of St. Mary Catholic Church in Escondido, California.

“My family has been able help me physically, but with the part I have inside of me, it has been really hard to open up. I had so much anger in my heart and was so sad, I could cry about anything. Here I felt my heart open up. I went to confession and I felt that God was talking to me through the priest,” she said.

Since its founding six years ago by Judy Isaacson Schaffer, a Teaneck, New Jersey, marketing and sales professional whose father and grandfather served in the military, Heroes to Heroes has taken 14 groups of U.S. veterans — including those who served in Vietnam — to meet with their Israeli counterparts and visit holy sites. It is a peer-support program with the goal of helping achieve spiritual healing and preventing suicide.

Villanueva’s group was in the Holy Land Sept. 5-12. Participants visited Bethlehem, were baptized in the Jordan River and joined in the Israeli memorial ceremony commemorating the 9/11 attacks in New York and elsewhere.

With 22 U.S. veterans committing suicide every day, Schaffer said she recognized the need to reach out to those veterans suffering the most from PTSD, just as her father had volunteered with veterans from earlier wars. Because less than 1 percent of Americans serve in the armed forces — a small fraction of whom are women — many veterans feel isolated when they return, she said.

The peer-to-peer encounter with Israeli veterans, some of whom have also experienced traumatic injuries, as well as discussions within their own group allow the U.S. veterans to see that it is possible to move forward from their challenging experiences, Schaffer explained.

Participants are asked to stay in contact with members of their group for a year after the visit.

Most of the veteran services available in the U.S. are geared towards male veterans, and perhaps because of this lack of institutional and communal support, more women veterans commit suicide than men, Schaffer said.

In addition to combat trauma, some women have also been victims of military sexual trauma, she said.

“I will never get over (the trauma), but I can get past it,” said U.S. Army veteran Rory Shaffer, 42. A mother of three, Shaffer served twice in Iraq and was severely injured in a blast which killed three of her friends. She also witnessed the suicide of another friend while on combat duty.

“Within my household, I have support but the rest of my family just thinks I should get over it,” Shaffer said. “I have been suffering. I was not expecting that one-third of the group would say this group saved their lives.”

NEXT: Vatican diplomat recalled from U.S. during child-porn investigation