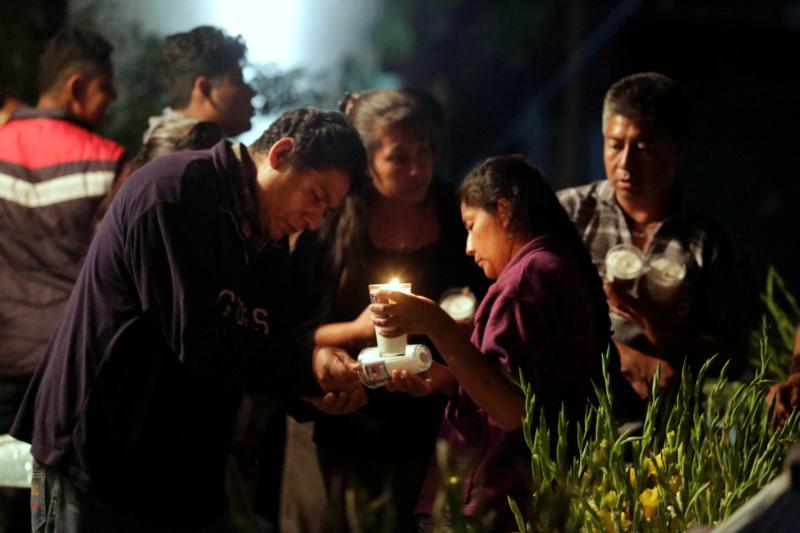 People light candles Sept. 20 for the 11 victims who died after the roof of a church collapsed following an earthquake in Atzala, on the outskirts of Puebla, Mexico. A Catholic bishop and a Caritas worker in Mexico said the situation was extremely serious after the Sept. 19 earthquake, and much aid would be needed. (CNS photo/Imelda Medina, Reuters)

PUEBLA, Mexico (CNS) — The legend goes that there are 365 churches in San Pedro Cholula, one for every day of the year.

However, in the aftermath of the Sept. 19 earthquake, nearly every colorful and picturesque church is fractured and security perimeters make sure congregants cannot access them. Residents fear more might still tumble.

“Don’t climb there, the structure could erode,” shouted Margarita Tecanhuehue, warning a child who was climbing a column in the patio of St. Peter Parish southeast of Mexico City. She volunteers to guard the small chapel of the damaged church.

“We mourn when we see our churches like this, and not because they are beautiful,” Tecanhuehue told Catholic News Service. “They are our sanctuaries, our places of worship.”

Of 43 churches in the municipality, only 12 are safe.

In San Pedro Cholula and in the entire state of Puebla, people go out of their way to pray and worship. For the most part, congregants look for small chapels in which to gather. Sometimes, however, Mass is celebrated in schools or outside of the church, as in the town of San Cristobal Tepontla.

“There, people worship outside,” said Maria Rocio Saucero Perez, who came to pray at St. Peter. “The saint’s statue, a few benches and a tarp have set up in front of the church.”

People pray wherever and whenever they can, she says.

“Everything is still disarticulated at the moment, people don’t really know where to go,” Tecanhuehue explained. “I would be full of pride if I told you that my faith has not been put to the test.”

The emblematic Shrine of Our Lady of Remedies in Cholula, which stands atop a pre-Hispanic pyramid, lost its two towers during the earthquake. Lucero Cielo was at Mass there, when the earth started to shake. She helped evacuate 50 people from the church.

“They were in shock, especially when the towers fell and shattered right in front of us,” Lucero Cielo told CNS. Congregants feared that the pyramid beneath their feet might also give in.

After the shaking stopped, and despite the angst of the entire church collapsing around them, Cielo and the priests went to recover all the statues and sacred objects from inside the dusty structure. The items now are safe in St. Peter Parish under Tecanhuehue’s custody.

In Puebla, people say that the 226-foot high cathedral is the only church left intact from the earthquake because angels have protected it for centuries. Residents from throughout the city come to worship here.

“I am not from around, I actually live in the outskirts of Puebla,” said Pascual Chavez Moreno while on his way to the cathedral. “But I come all the way here because the cathedral is the only church that is open, and I absolutely needed to find one and give thanks to God.”

Chavez has had had problems with his heart since the quake and had just left the hospital.

“Actually, I am grateful to God ever since he helped me overcome alcoholism and rekindle relationship with my daughters. I needed to find an open church,” he said.

The lack of safe worship spaces does not deter residents from seeking God and helping earthquake victims. Soccoro Jimenez, who came with her two daughters to help sort donations at church-run Caritas Puebla, said the past month has been difficult. She said she decided to volunteer to seek God and help those hurting after the earthquake in any way she can.

“My son died a month ago because of an accident … and then the earthquakes came,” Jimenez said. “After making the mistake of reproaching (God) for my son’s death, like other parents who have lost their child in the earthquake might do too, I know it is only with God’s hand that we can keep on going … only he knows what the future holds.”