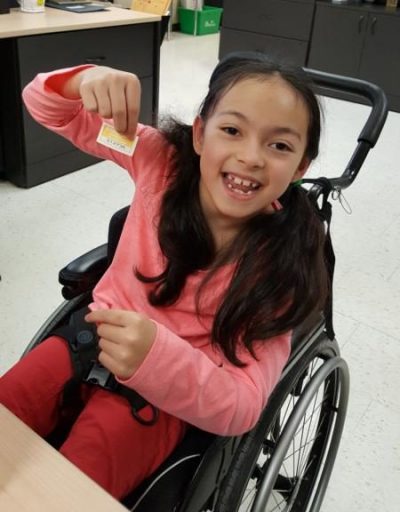 RICHMOND HILL, Ontario (CNS) — Athena Santos Roy’s dream is to walk and run and jump just like any other kid.

Now, because of an outpouring of support from a Catholic school community, the 9-year-old girl who lives with a form of cerebral palsy is on her way to realizing her dream.

What began as a school project at Our Lady Help of Christians School in Richmond Hill, near Toronto, mushroomed into a community-wide fundraising effort that will give Athena the surgery she needs so she can walk.

The effort began when her mother, Fiona Santos, a seventh-grade teacher at the school, told colleagues in January about a surgery available in the United States that could allow her daughter to walk independently for the first time in her life.

“Right from the get-go, when they found out that this was an opportunity for Athena, everybody in the school rallied behind her — staff, families, parents, students, you name it,” Santos said.

The goal of raising $98,500 was reached in eight months. Athena’s life-changing surgery was scheduled for Oct. 10 at St. Louis Children’s Hospital in Missouri.

Athena was born with periventricular leukomalacia, a form of cerebral palsy that limits movement in her legs and her left hand.

She walks on her tiptoes with the help of a walker and she regularly sees chiropractors and physiotherapists to stretch her muscles.

In December, Santos heard about a surgical procedure called selective dorsal rhizotomy that could correct muscle stiffness in Athena’s body. She discovered, however, that the surgery is done in only a few locations, which led her to Dr. T. S. Park, a pediatric neurosurgeon in St. Louis who specializes in the procedure.

“The success rate with him is just incredible,” Santos said. “If Dr. Park approves you, you know there’s going to be significant improvement in some way, and in Athena’s profile, he also predicts that there will be the possibility that she could walk independently.”

Although the surgery is normally covered by the Ontario Health Insurance Plan, Athena was informed she did not qualify. At first, she was told it was because she lived outside the service area of the two institutions in Ontario that perform the procedure. When that hurdle was overcome, she was told her surgery could not be approved because she was older than the “optimal age range” of 4 to 7 years old.

That left St. Louis as the sole option.

“Dr. Park, again, is a word-renowned specialist of this surgery and he does the surgery on people as young as 2 to 50 years old,” Santos said. “At that point, we were well underway (with fundraising), so there was hope. To me, it was like, if I could at least fundraise enough, there was hope.”

“I never thought in a million years that we would reach our goal,” Santos said. “I can’t even describe to you how moving it was, especially because they believed in us and they believed in the possibility for my daughter.”

NEXT: In Mexico, where churches don’t stand, people still pray